What: Ebix (NASDAQ:EBIX) shares rose 18% in April 2016, according to data from S&P Global Market Intelligence. This climb was all about fresh clients for the provider of software and e-commerce services.

So what: On April 13, Ebix shares jumped 11% on news of an $11.6 million e-governance project in India. In a 12-month joint operation with government-owned Internet service provider Bharat Sanchar Nigam Limited (BSNL), Ebix will set up online government services for some 1.2 billion Indian citizens. Moreover, Ebix expects "many more such wins" over the coming year.

To put that contract into perspective, $11.6 million works out to more than 4% of Ebix's trailing revenue. In other words, this agreement is a pretty big deal, and having several of them would be even better.

Just two days later, Ebix trumpeted another large client win. This time, the company will provide a coordinating insurance exchange in London, where local insurers can set up, track, manage, and follow-up on insurance plans via a single platform. Technically, Ebix will deal with a newly formed entity known as Placing Platform Limited, but that nexus has the backing of several insurance regulators and operating groups.

In this five-year project, Ebix will collect $15 million of fresh revenues each year. That's a healthy 5.6% boost to current revenue levels, and a recurring one at that. Ebix shares jumped another 10% on this news, and for good reason.

Now what: In early May, Ebix reported strong first-quarter results, beating analyst targets on both the top and bottom lines. The report included a first bite of revenue flows from the London project.

CEO Robin Raina underscored the new wins in India and London, holding them up as evidence of his company's "scale and momentum."

This growth story stalled in 2013 and 2014, but has come back with a vengeance in recent quarters. The surging sales and cash flows do come with a downside for investors, as share prices have more than tripled since the summer of 2014. The stock now trades at 16.7 times forward earnings, while earnings are growing at an annual rate of 33%. It's not a stock for every portfolio, but growth investors with a high risk tolerance should certainly take a closer look. 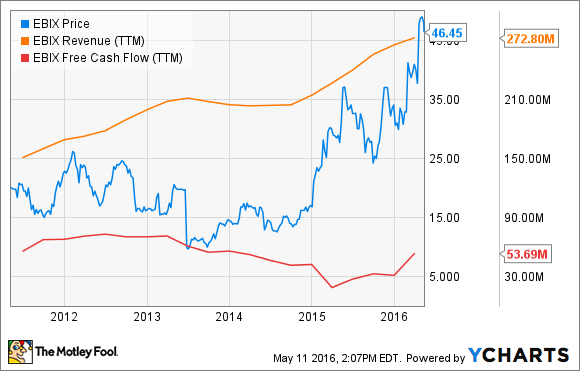