Please ensure Javascript is enabled for purposes of website accessibility
Log In Help Join The Motley Fool
Free Article Join Over 1 Million Premium Members And Get More In-Depth Stock Guidance and Research
By Daniel Miller - May 14, 2016 at 9:43AM

These stocks are trading at a discount compared to a year ago, but there are reasons to expect both will have a winning 2016.

Up and down the markets go, where will they stop? Nobody knows. There's been enough drama on Wall Street thus far in 2016 to rival the latest Kim Kardashian ploy or the newest reality television show.

That drama has included the worst ever two-week stretch to start a year, followed by the biggest quarterly reversal in 83 years when the market climbed strongly to finish the first quarter. West Texas Intermediate crude prices hit a 12-year low and natural gas prices hit a 17-year low. Gold posted its best quarter in 30 years; Japan sold a negative interest rate 10-year bond for the first time; and even the people's champion, Apple, reported a year-over-year sales decline, something it hadn't seen in almost 13 years. And I'm not even going to touch the subject of China's unpredictable economy.

On the bright side, if the market drama continues, it will surely bring investors more opportunities to pick up dividend stocks on the cheap. Here are two to keep an eye on.

Does Cummins' rally have legs?

Cummins (CMI -0.18%) has essentially rebounded throughout 2016 thus far, its rise starting just about when the calendar flipped over. However, the stock is still trading 18% lower than its level twelve months ago, and it finds itself roughly in the middle of its 52-week trading range. The questions are: Does its rally have legs, and if not, is the stock worth the risk?

Despite first-quarter sales coming in 9% lower year over year, and EBIT margins moving 60 basis points lower to 11.3%, the company still managed to meet analysts' estimates on the top line and beat estimates on the bottom line. It remains on track for its 2016 full-year guidance, and is still committed to returning value to shareholders despite business challenges in its end markets.

Consider that during the first quarter, the company generated 163% more free cash flow ($192 million), due to lower working capital balances. That cash went toward $170 million of dividends. And, thanks to some borrowing, it also made $500 million of share repurchases at an average price of $102 a share.

Cummins has gained market share in its engine, power generation and components segments, and that trend should continue as the company focuses on helping its customers meet ever-stronger emissions regulations in countries around the world. Lastly, its bottom line does have some upside, thanks to the restructuring of its power-generation segment.

The company currently trades 18% below where it was a year ago, offers a forward price-to-earnings ratio of 14, and boasts a 3.2% dividend yield. If market volatility brings a better price, Cummins definitely warrants a place on long-term investors' watch lists.

Union Pacific is the big engine that could

Ask any company that depends on coal in any way for part of its business, and they'll tell you the past couple of years have been a complete nightmare. That goes for those that sell heavy mining equipment, to the miners themselves, and the railroads -- such as Union Pacific (UNP -0.44%) -- that carry the majority of that coal across the country. The good news for potential investors is that Union Pacific has managed the headwinds caused by slumping coal demand and volume pretty well.

Consider that Union Pacific's first-quarter revenue did decline a substantial 14% year over year, but the all-important operating ratio only posted a 30 basis point decline. That's really impressive, in my opinion, considering that its coal-shipping revenue plunged 43% year over year. It's the result of a decade's worth of efforts to improve pricing and reduce costs.

While railroads struggled in 2015 due to the lower volume environment, Union Pacific's on track to continue making its business more lucrative, and is aiming to reduce its operating ratio to 60% on a full-year basis by 2019.

Union Pacific also has an enticing footprint for investors. 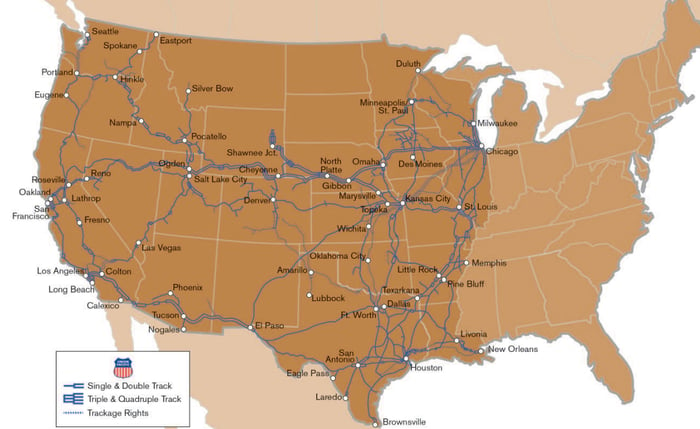 Its Western railroad tracks provide access to desirable freight loads of commodities and containers imported from Asia. The tracks extend from the West Coast all the way to major Midwest cities such as Chicago and St. Louis, and south into Texas and New Orleans. It's a massive and lucrative footprint, and the high barrier of entry to the rail business provides investors with some measure of safety.

In my mind, while railroads might not be sexy stocks to discuss when you're talking investments at the water cooler, it's almost impossible to imagine railroads won't be lucrative  for their shareholders over the next decade -- and likely for much longer. Union Pacific is huge, increasingly profitable, and currently dishes out a dividend yield of 2.5%; despite having been beaten down -- it shed 20% of its value over the past year -- it's an attractive option for any investor's watch list.