Please ensure Javascript is enabled for purposes of website accessibility
Log In Help Join The Motley Fool
Free Article Join Over 1 Million Premium Members And Get More In-Depth Stock Guidance and Research
By Alex Dumortier, CFA - May 17, 2016 at 12:30PM

Dr. Michael Burry, one of the heroes of Michael Lewis' "The Big Short" for predicting the subprime crisis, has exited his positions in Bank of America and Citigroup.

The "Big Short" investor no longer likes banks
Monday marked the deadline for investment managers to report their holdings to the Securities and Exchange Commission on form 13F. As such, financial journalists and investors will be poring over the reported holdings of some the most successful and best-known investors -- names such as Soros, Buffett, or Icahn.

One name that won't get much attention is Michael Burry. He was one of a few contrarian investors profiled in Michael Lewis' movie "The Big Short" who predicted a horrific end to the housing and credit bubble -- and reaped huge returns by betting against rotten mortgage-backed securities and the banks that put them together.

Dr. Burry then returned his investors' money in order to manage his own assets through Scion Capital, which began reporting its holdings starting with the fourth quarter of last year.

At the end of 2015, Burry was heavily invested in financials, which represented nearly a third of his reported assets, including a 7% position in Bank of America Corp and a 6.8% position in Citigroup Inc.

However, his latest filing shows he closed his position in both of those banks in the first quarter (along with Bank of New York Mellon Corp and PNC Financial Services Group Inc).

In his investor letter for the first quarter of 2008, Burry ventured an outlook for the banking industry, concluding:

Any investment thesis in these companies must therefore be based upon modest returns on a substantially reduced equity base. I imagine the shares of these companies, in most cases, will become very boring before they become attractive again.

That's exactly what happened; in fact, both B of A and Citi continue to struggle to earn their cost of capital. Investors are not expecting anything above the low teens with regard to return on equity (which isn't so bad!).

I've been banging the drum on both of these institutions for some time, as I think they remain undervalued, so the fact that a value investor of Burry's caliber has jumped ship gives me some pause.

Share buybacks: The end of the trend?
At the end of last month, Goldman Sachs' Global Investment Research team observed in a note that "[c]orporate repurchases are the main source of U.S. equity demand," before forecasting that "S&P 500 gross buybacks will rise by 7% to $600 billion in 2016."

However, Bloomberg reported today that announced repurchases over the past four months dropped 38%, their largest decline since 2009.

I put together the following graph, which shows that the amount of capital S&P 500 companies returned to shareholders (the sum of share repurchases and dividends) has increased significantly over the last three fiscal years: 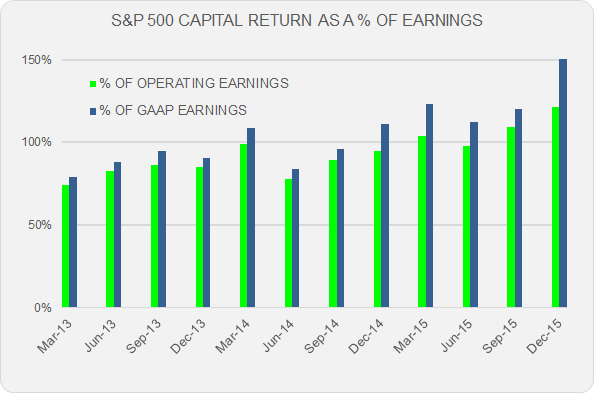 In fact, capital return exceeded earnings last year (note that the bars for the last four quarters extend above 100%). Clearly, that's not a sustainable policy, and it's one reason I think this bull market -- now the second longest in history -- could be exhausting itself.