Please ensure Javascript is enabled for purposes of website accessibility
Log In Help Join The Motley Fool
Free Article Join Over 1 Million Premium Members And Get More In-Depth Stock Guidance and Research
By Adam Galas - May 19, 2016 at 8:08AM

Find out why one stock in particular is likely to become one of the best dividend growth stocks in the utility and renewable-energy sectors.

Renewable energy is expected to experience massive growth in the coming decades. Given this tantalizing growth catalyst, many dividend investors are looking to yieldcos, which serve as renewable-energy utilities, for high-yields and strong income growth.

Yet as you can see, investing in yieldcos isn't necessarily for the faint of heart. 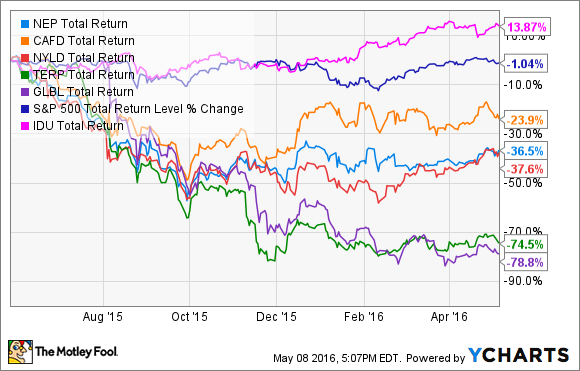 Over the past year, NextEra Energy Partners (NEP -0.57%), 8Point3 Energy Partners (CAFD), NRG Yield (CWEN 0.74%), TerraForm Power (TERP), and TerraForm Global (NASDAQ: GLBL), have all underperformed both the Dow Jones Utilities Index (IDU) and the market as a whole.

Yet this short-term crash also creates a great long-term investing opportunity for those willing to look past the recent industry turmoil and buy shares in the highest-quality yieldcos. Let's look at three reasons NextEra Energy Partners in particular deserves to be in your diversified dividend portfolio.

NextEra Energy Partners' stupendous growth was due to this quarter's acquisition of 300 MW of additional wind farms from its sponsor and general partner, NextEra Energy (NEE 0.58%) These forms of acquisitions, known as dropdowns, are often the key to understanding the growth potential of a yieldco.

Thanks to this strong growth catalyst, NextEra Energy Partners is confident that it can continue growing its payout at a fast pace for the foreseeable future. However, as wonderful as distribution growth might be, there are additional important factors income investors need to consider.

2. The strongest payout profile among its peers

NextEra Energy Partners is currently trading at a premium relative to its rivals. That is probably a result of Wall Street's strong confidence in the long-term sustainability of the current payout, as well as many years of further dropdowns from NextEra Energy

One of the strongest reasons for this confidence is the conservative nature of NextEra Energy's management, especially compared with the TerraForm yieldcos. Their sponsor, SunEdison, recently declared bankruptcy because of the mountain of debt it acquired by trying to grow too quickly. Along the way it tried to offload much of that debt onto its yieldcos, as well as sell them its solar assets at elevated and sometimes unprofitable prices.

Which brings me to the final reason NextEra Energy Partners represents the highest-quality yieldco available today.

3. Conservative management is vital to long-term success
TerraForm Power and TerraForm Global show precisely why impatience is the enemy of long-term investing success. SunEdison was so eager to have its yieldcos grow their payouts because, as their general partner, it would receive 50% of marginal cash flow above a certain distribution level.

In contrast, NextEra Energy, 8Point3 Energy Partners, and NRG Yield all have management teams that are willing to take a more cautious approach to growth. Thus their respective balance sheets are much stronger. This minimizes the chance of violating their debt covenants, which would trigger a suspension of payouts to investors and send their share prices nosediving.

Risks to be aware of
Even with their cash flows secured by fixed-fee contracts with financially sound utilities, often for 17-25 years, there are risks to investing in renewable-energy yieldCos. For example, wind and solar power are variable, affected by season and weather.

For instance, solar output is lower during the winter months, when days are shorter. Meanwhile NextEra Energy Partners reported a 25% difference in wind output, relative to expected amounts, between March 2015 and February 2016. This variability means that alternative cash flow sources, such as NextEra Partners' and NRG Yield's natural gas pipelines and gas-fired power plants, respectively, can provide extra payout stability.

Finally, be aware that the yieldCo business model involves funding growth through debt and equity, which means that low share prices can hurt a yieldco's growth potential if it persists long enough. Thus, NextEra Energy Partners' premium might end up with a competitive advantage over its rivals, because it allows for acquiring drop downs without taking on too much debt.

Bottom line
With the best distribution coverage ratio in its industry, the nation's largest supplier of renewable energy power as its sponsor, and a conservative, long-term-focused management team, NextEra Energy Partners could prove one of America's best dividend stocks over the next decade.