Please ensure Javascript is enabled for purposes of website accessibility
Log In Help Join The Motley Fool
Free Article Join Over 1 Million Premium Members And Get More In-Depth Stock Guidance and Research
By Lee Samaha - May 19, 2016 at 10:34AM

A look at the IT bellwether's earnings and what happened with trends in its core switching and routing businesses.

The headline numbers from Cisco Systems'(CSCO -0.09%) third-quarter results, reported May 18, were good on a superficial basis, but let's take a closer look at the underlying themes and trends in order to better see what's going on. In truth, it's hard to argue that the earnings weren't a net positive, but there are some underlying concerns from the report.

Clearly, revenue growth was good, but margin growth was even better, leading to EPS ahead of expectations -- a good quarter, especially in the circumstances of a moderate global economy.

The details behind Cisco's third quarter

The best way to think about Cisco's earnings is to look at four separate item: (1) core products (I'm defining these as switching and routing), (2) non-core (collaboration, data center, wireless, security, service provider, and other products), (3) services (which tends to lag product revenue growth), and (4) deferred revenue growth. The fourth is important because Cisco is selling more software on a subscription basis, therefore shifting some upfront revenue toward a stream of revenue that's recognized over time.

The good news is that, according CEO Charles Robbins on the earnings call, data center switching is playing out as "we had indicated," but because of an uncertain environment, enterprises are not refreshing their campus networks.

Clearly there is a macro issue that we are dealing with. We also saw again as you heard from some of our peers, we saw some increased caution in the service provider space. We saw slow movement in the core of those networks.

So, if it wasn't a good quarter for Cisco's core business, where did the guidance-beating numbers come from?

Cisco's non-core and services to the rescue

Starting with services revenue (up 11%), any way you look at it, Cisco had a good quarter. The headline number is somewhat flattering -- Cisco had an extra week in the quarter -- but as CFO Kelly Kramer explained, when service revenue growth is normalized, growth was still up 4% compared to 3% in the second quarter and 1% in the first -- a nice trend. 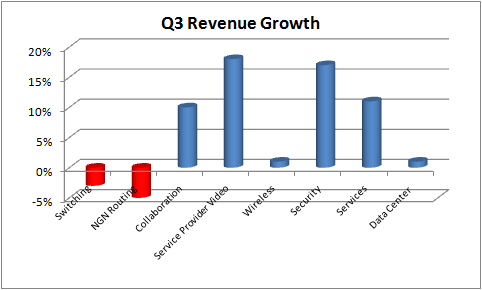 Ultimately, total revenue grew by around $350 million, or 3%, with around 90% of the growth coming from services. For those trying to work out where the remainder came from, it's due to non-core product revenue offsetting core product declines.

A look at deferred revenue shows 8% year-over-year growth, but on a sequential basis, it was relatively flat. This is definitely something to look out for in future quarters, because as you can see in the chart below, Cisco will come up against some tougher comparisons from the fourth quarter onward. 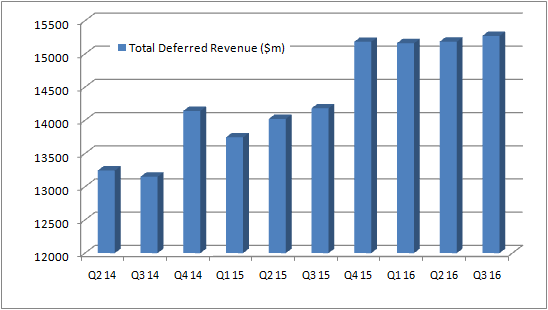 It was a good quarter from Cisco -- it's hard to argue with margins and earnings ahead of expectations -- but investors will want to see a return to growth in its core businesses in future quarters. Similarly, Cisco is coming under pressure to keep growing services revenue, particularly when core product revenue is declining and deferred revenue growth could slow in the coming quarters.