Please ensure Javascript is enabled for purposes of website accessibility
Log In Help Join The Motley Fool
Free Article Join Over 1 Million Premium Members And Get More In-Depth Stock Guidance and Research
By John Rosevear – Updated May 30, 2018 at 4:10PM

Both Ford and GM are about to put new 10-speed automatic transmissions into production. That's not coincidence. Here's the story.

Ford Motor Company (F 0.36%) announced last month that it will invest $1.4 billion in new tooling and upgrades at its Livonia Transmission Plant in Michigan to build an all-new 10-speed automatic transmission.

Earlier this year, General Motors (GM 0.87%) announced that it will spend $343 million on new tooling for its own transmission factory, in Romulus, Michigan -- also to build an all-new 10-speed automatic transmission.

Is it coincidence that the old archrivals are gearing up (so to speak) to produce a new 10-speed transmission at the same time? Nope. 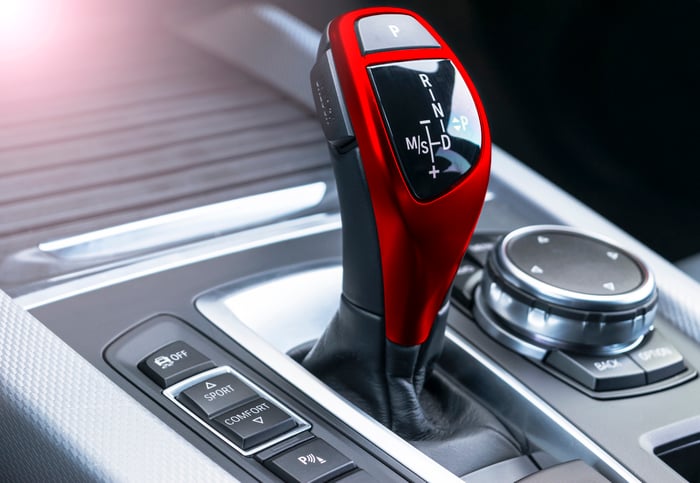 Yes, it's the same transmission (almost)

This might come as a surprise to those who think of Ford and GM as archrivals, but the two companies developed their new 10-speed automatic transmissions together.

That 10-speed automatic is the one that Ford and GM are both now gearing up to produce in their own plants. While each automaker will have their own version of the transmission, with unique software and other proprietary tweaks, the basic units are the same.

Sometimes it makes sense for rivals to cooperate

Ford and GM are fierce competitors. But it makes sense for the two to be "frenemies" sometimes, and transmissions are a great area for cooperation. Modern automatic transmissions like these new 10-speeds are complex, high-tech units that are critically important to how well a vehicle performs (and how efficient it can be). But for the most part, they're not really part of the vehicle's brand identity. Most buyers will never see their car's transmission.

But even though Ford and GM designed the new 10-speed units jointly, they'll be able to differentiate them in production. Modern automatic transmissions have extensive software controls, meaning that each company can tweak their units' behavior to best meet their individual goals.

Why didn't Ford and GM just buy transmissions from a supplier?

Many automakers buy transmissions from major auto industry suppliers like Germany's ZF Friedrichshafen, which supplies a well-regarded 8-speed automatic to many luxury-car makers. (Fiat Chrysler Automobiles (FCAU) manufactures a version of ZF's 8-speed in its Indiana transmission factory under license.)

The answer is probably one part hard-headed business reasoning, and one part pride. The costs of developing the 10-speed surely weren't small, but they'll be spread over millions of units: It's likely that the new transmission will eventually be used in millions of Ford and GM pickup trucks and SUVs over the next several years, as well as rear-wheel-drive sports cars and sedans.

Given the anticipated production volumes, there was almost certainly a strong business case for developing and building the new transmissions in-house, especially if the costs could be shared with a cross-town rival. Over the new 10-speed's production lifetime, its almost certainly cheaper than buying comparable units from ZF.

"Pride" (or more generously, a legitimate competitive advantage) was probably also a factor. By developing their own units, GM and Ford can prioritize the performance and economy attributes that make sense to them -- and perhaps get an edge on rivals that have to use products from suppliers.

Consider this example: GM currently uses an 8-speed automatic that the company developed in-house. It could have purchased the well-regarded ZF unit, but instead it chose to develop a transmission that would shift more quickly than ZF's 8-speed. Shift time doesn't matter a whole lot in a pickup truck, but it's an important consideration in a sports car like GM's Chevrolet Corvette, which competes with technically advanced rivals like Porsche's 911.

Normally, the costs of developing a unique high-tech transmission for a low-volume model like the Corvette would be prohibitive. But because the transmission is also incorporated into tens of thousands of GM pickup trucks and SUVs every month, the costs of developing a unit that was optimized for the Vette's special needs (and also well suited for truck use) weren't excessive.

These transmissions will be rolled out later this year

GM global product chief Mark Reuss said in March that the first model to get GM's version of the 10-speed will be the Camaro ZL1, a high-performance version of the sports coupe that will go on sale this fall. Eventually, it's expected to appear in some versions of GM's full-sized pickups and its big truck-based SUVs.

Ford is planning a somewhat broader rollout. Its version of the new 10-speed will first appear in a high-performance application, the new F-150 Raptor pickup -- but it'll also be used in 2017 F-150s equipped with the revamped version of Ford's big-selling 3.5 liter EcoBoost V6.

Eventually, the new 10-speed automatic transmissions will probably replace the 6- and 8-speed units that Ford and GM use in their rear-wheel drive vehicles now. If that helps both automakers make their popular big trucks and SUVs a bit less thirsty, the joint venture that developed the transmissions will have been a profitable one.