Please ensure Javascript is enabled for purposes of website accessibility
Log In Help Join The Motley Fool
Free Article Join Over 1 Million Premium Members And Get More In-Depth Stock Guidance and Research
By Cheryl Swanson, Cory Renauer, and Brian Feroldi - May 24, 2016 at 8:06AM

Motley Fool contributors place their bets on what dividend payers could pay off better than JNJ long-term. Johnson & Johnson (JNJ 1.13%) is a financially sound blue-chip favorite among generations of investors.

But many investors already hold it as a core position, and while they may be sorely tempted to add to their holdings, it's always a mistake to depend too heavily on the performance of a single stock. In addition, the company looks expensive right now, so it may make sense to wait for a pullback before buying again.

So where should investors be looking for diversification alternatives to J&J that offer better dividends? Without further ado, here are three stocks our contributors believe could be better choices.

Brian Feroldi: Investors might not be as familiar with the name AbbVie (ABBV 0.42%) as they are with Johnson & Johnson, but if dividends are what they're after, I'd suggest giving this pharma giant a closer look.

AbbVie's stock hit the markets in 2013, after being spun off from its former parent (and dividend aristocrat) Abbott Laboratories. The stock has since crushed the returns of Johnson & Johnson, Abbott Laboratories, and the S&P 500 in general over that time period. 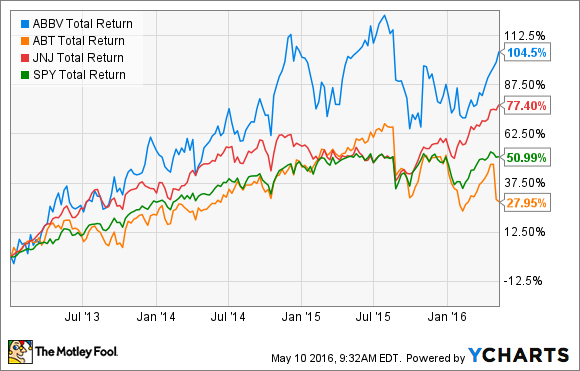 Largely responsible for the stock's success has been AbbVie's megablockbuster chemotherapy and immunosuppressant drug, Humira. In 2015, sales of Humira were more than $14 billion, making it the world's top-selling drug. And it's still growing at an impressive rate -- more than 19% year over year on a currency-neutral basis.

Of course, there's a downside to having such a massive winner like Humira in its lineup. Last year, the drug accounted for more than 60% of AbbVie's total revenue, so stalling or declining sales could cause a world of hurt. Moreover, one of Humira's key U.S. patents will expire at the end of this year, which some believe could open it up to biosimilar competition. That's a real threat.

Management, to its credit, is well aware of the risks, and it's done its best to assure investors that AbbVie's future still looks bright. Management also believes that Humira is well protected from competitors until at least 2022 due to additional patents, and when you add in the fast growth of newer drugs -- such as its hepatitis C cure, Viekira Pak, and its cancer drug, Imbruvica -- they believe that sales in 2020 will top $37 billion. That guidance suggests that annual revenue and earnings growth will be in the double digits over the next few years.

If you're a believer in management's long-term outlook, then AbbVie looks like a bargain. It's trading for 11 times next year's earnings estimates and offers a dividend yield of 3.82%. That's a compelling combination for a stock that could grow at an above-average rate.

Cory Renauer: Financial-services stocks have taken it on the chin over the past year, dragging T. Rowe Price Group (TROW 1.50%) down along with its peers. As a result, its dividend yield is a juicy 2.88%, just a bit above J&J's. 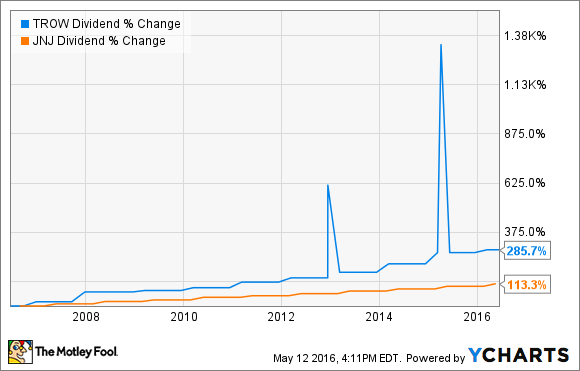 That's hardly the only reason I like this company's dividend better than the healthcare giant's. The company has raised its distribution at a blazing rate, especially in recent years.

Add in the occasional "special" dividend, like the $2.00 per share it paid last April on top of the quarterly $0.52 it paid last March, and this highly profitable stock is bound to keep you smiling in the years ahead.

Looking forward, there's plenty of runway to keep those distribution increases coming. In light of last year's whopping special dividend, the most recent increase was a modest 3.8% bump to $0.54 per quarter. The company used only 44.6% of profits recorded during the first quarter to pay out $135.9 million in dividends to its happy shareholders -- a payout ratio slightly lower than J&J's 48.2% in the first quarter.

Another reason for the relatively modest dividend raise announced in February was a prescient decision last December to boost the stock-repurchase authorization by 12 million shares to 20.9 million, The stock dipped on fears of a global economic slowdown and rising interest rates, and management scooped up a little over 1.15% of shares outstanding.

The debt-free asset manager has made 30 consecutive annual dividend increases and will have a few million less in stock to pay out on as it continues its streak in the years ahead.

Cheryl Swanson: J&J currently yields only about 2.84%, a respectable but hardly spectacular yield. If you're willing to absorb a little more risk in return for a much higher dividend, I'd suggest HCP (PEAK 2.59%), the only real estate investment trust (REIT) in the S&P Dividend Aristocrats Index.  With a 6.74% yield, HCP makes its money by renting out healthcare properties such as senior-living, acute-care, and medical-office buildings. 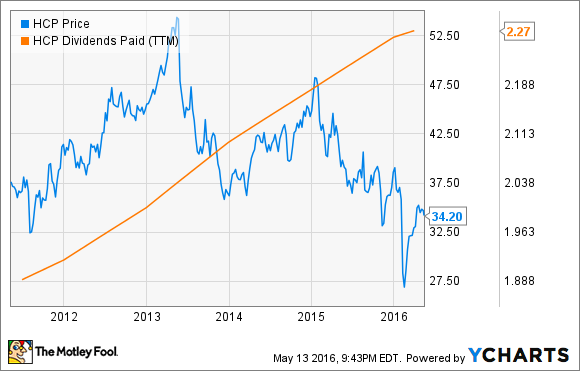 As any investor who survived the recession of 2007 to 2009 can attest, the real estate market can be very unstable. But healthcare REITs tend to be less so because governments and individuals can't really cut back on healthcare spending, no matter how good or bad the overall economy is.

In particular, HCP holds 1,200 properties and has recently increased its dividend yet again, marking 31 consecutive years. Still, it's a mistake to assume that a dividend aristocrat is invincible. In particular, HCP has faced murky headwinds because of some of its facilities reliance on Medicare and Medicaid reimbursements, which can unexpectedly shift and make businesses less profitable.

That's why HCP's surprise announcement and terrific earnings last quarter should see this stock heading right back up again. Management solved its biggest problem by announcing the spinoff of government reimbursement reliant ManorCare into a separate REIT, which should improve HCP's financial position and stability. In fact, with the company's exposure to ManorCare ending, I see an opportunity for more annual total return potential than J&J.