Please ensure Javascript is enabled for purposes of website accessibility
Log In Help Join The Motley Fool
Free Article Join Over 1 Million Premium Members And Get More In-Depth Stock Guidance and Research
By Leo Sun - May 25, 2016 at 6:22AM

Here's why Seagate and Vector Group’s muscular yields may be unsustainable.

Income investors are often drawn toward stocks with high yields, but big dividends aren't always sustainable. If a company consistently pays out over 100% of its free cash flow in dividends, it's likely that the dividend will be cut. Let's examine two stocks that fit that profile -- hard drive maker Seagate (STX) and tobacco and real estate company Vector Group (VGR 0.29%). 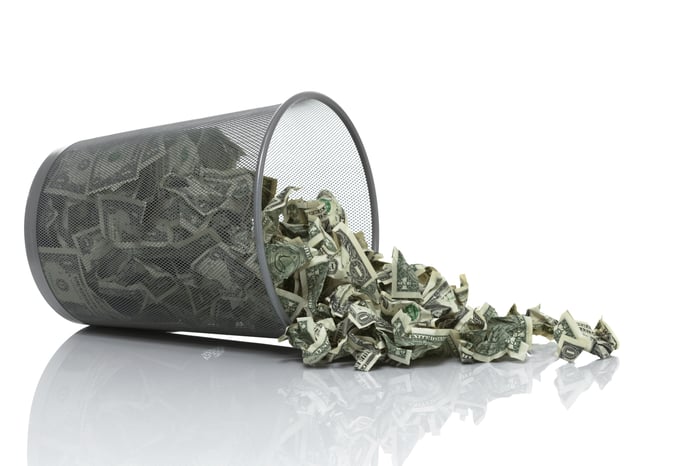 Seagate has a forward annual yield of 12.8%. Over the past 12 months, it paid out 71% of its free cash flow as dividends, which looks sustainable. But last quarter, Seagate's free cash flow plunged 49% annually to $110 million, yet it paid out $188 million in dividends. That equals a quarterly payout ratio of 171%, which clearly isn't sustainable as long as FCF levels keep falling.

During last quarter's conference call (as transcribed by Thomson Reuters), CFO Dave Morton stated that the dividend was "well manageable, albeit at the higher end of those levels of a payout ratio." However, a look at Seagate's FCF growth over the past four years doesn't inspire much confidence in its ability to support a 12.8% yield. 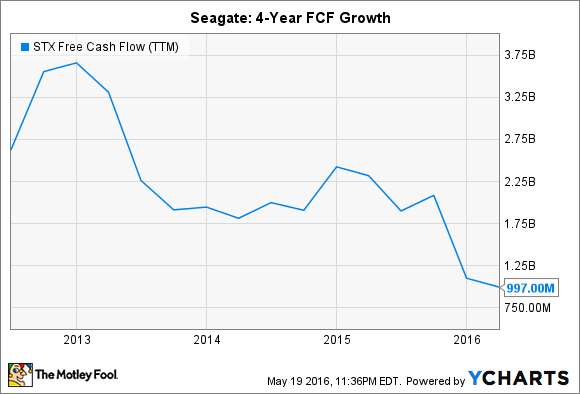 This isn't the first time Seagate paid a double-digit yield. Back in 2009, its yield topped 12% due to its stock falling to multi-year lows during the financial crisis. To preserve cash, it suspended its dividend for two years. The same scenario is destined to play out if Seagate's cash flow and earnings don't improve.

Instead of making a big acquisition to gain a foothold in the SSD market, like Western Digital's purchase of SanDisk, Seagate seemingly intends to wait for the PC and enterprise markets to recover -- an arguably timid strategy which could cause it to fall further behind WD in the data storage market.

Vector pays a forward annual yield of 7.6%, and has spent 167% of its free cash flow on dividends over the past 12 months. That ratio has remained in the triple digits for nearly a decade, but the company didn't address that hefty payout ratio at all during last quarter's conference call (as transcribed by Seeking Alpha).

Instead, CEO Howard Lorber stated that the management was "proud of the company's uninterrupted track record of paying [regular cash dividends] since 1995 and an annual 5% stock dividend since 1999," and "reaffirms that our cash dividend policy remains the same." Unlike Seagate, Vector's FCF growth has improved over the past four years. However, that growth doesn't come anywhere close to covering its dividends. 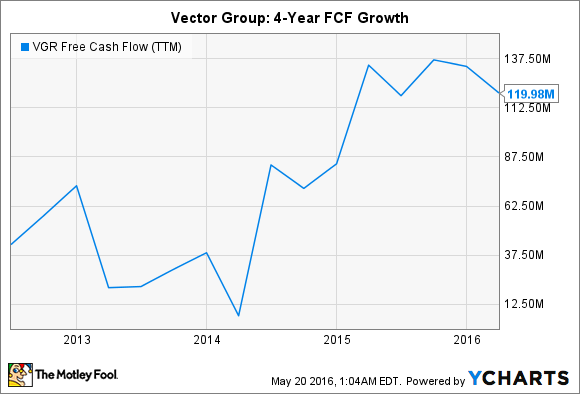 Last quarter, Vector's revenue rose 5.5% annually to $381 million. Tobacco revenue fell 3.1% to $221 million due to falling shipment volumes. However, real estate revenue rose 20% to $160 million, thanks to an increase in commissions and brokerage income at Douglas Elliman. Vector's net income fell 8.9% to $21.4 million, due to an increase in operating expenses, litigation expenses, losses on real estate and other investments, and a $4.8 million impairment of investment securities available for sale.

Vector's hybrid business model rolls the profits from the low-cost tobacco business into the higher-cost real estate one. That business model doesn't require much free cash flow, but it doesn't explain why the company keeps funding dividends out of its own pockets. That's why I personally prefer bigger tobacco players like Altria and Philip Morris, which have more transparent business models and sustainable payout ratios.

I'm not saying that Seagate and Vector Group will slash their dividends anytime soon, but investors drawn to their big yields should do their homework, and evaluate their payout ratios and free cash flow growth. By digging more deeply into the numbers for such apparently tempting stocks, you can avoid high-yield traps and find solid income investments which are capable of paying dependable dividends for years to come.