Please ensure Javascript is enabled for purposes of website accessibility
Log In Help Join The Motley Fool
Free Article Join Over 1 Million Premium Members And Get More In-Depth Stock Guidance and Research
By Cory Renauer - May 27, 2016 at 8:22AM

One is growing fast; the other is already gigantic, but which is the better buy now?

A decision to go big with Regeneron Pharmaceuticals, Inc. (REGN -1.09%), or much bigger with Roche (RHHBY -0.24%) isn't one taken lightly. Regeneron is growing sales and its pipeline at a breathtaking pace, but the Tarrytown, New York, biotech is also heavily dependent on a single drug at the moment.

Meanwhile, Swiss behemoth Roche is diverse, and it has the most promising late-stage pipeline in big pharma. It's also exposed to a great deal of biosimilar competition in the years ahead. Let's take a closer look at both to decide which is the better buy.

Although Regeneron recorded total revenue of $1.2 billion in the first quarter, net product sales were only $784 million. A frightening $781 million of those sales came from U.S. net product sales of Eylea, an expensive eyeball injection for treatment of several sight-related indications that affect hundreds of thousands of patients.

Regeneron also reported $399.3 million in collaboration revenue from partners Sanofi and Bayer. Bayer's contribution of $179.6 million was mostly in connection with outside-the-U.S. commercialization of Eylea. However, revenue from the Sanofi collaboration over next-generation cholesterol hopeful Praluent consisted mostly of R&D and commercialization-related reimbursement.

In fact, Regeneron's share of losses in connection with commercialization of antibodies under the agreement reduced collaboration revenue from Sanofi by $99 million in the first quarter. In other words, Regeneron's product sales are almost entirely dependent on Eylea.

Roche has a much deeper bench, but its leaders are getting old and should face pricing pressure from biosimilars -- generic forms of complex biologic drugs -- in the near future.

Sales of cancer therapies Rituxan and Herceptin are still growing by single digits despite first earning FDA approval in 1997 and 1998, respectively. In the first quarter, the pair comprised 28% of Roche's total sales, about $12.5 billion.

Roche has a handful of more recent blockbusters (i.e. drugs with over $1 billion in annual sales) growing at double-digit rates. Regeneron investors will be glad to know that Roche's Lucentis, one of Eylea's competitors, is not among them. First-quarter U.S. sales of Lucentis fell 13% to about $358 million.

Regeneron has two big problems in the years ahead. First is a tendency among thrifty eyeball doctors to use Avastin -- Roche's cancer drug -- off-label instead of Eylea. Preparing an intravenous infusion of Avastin for intra-ocular injection isn't easy, but it only costs about $50 per dose. Eylea costs roughly $1,850 per dose, prompting budget-minded healthcare providers to make the effort.

Regeneron's second big problem is Sanofi's slow launch of next-generation bad cholesterol-buster Praluent. Approved by the FDA last summer, first-quarter sales of $13 million are a long way off the drug's blockbuster potential, due mainly to limited indications. Upcoming results from a study measuring its ability to reduce risk of heart attack or stroke in certain patients could give the drug a boost. However, if the trial fails, it could mean trouble for Regeneron.

Luckily, two more Sanofi-partnered candidates look promising. First, dupilumab for the treatment of eczema, and possibly asthma, has provided impressive trial results. Also, sarilumab could be an important option for rheumatoid arthritis patients who don't respond well to currently available therapies. With millions of Americans suffering from each of these conditions, approvals could lead to blockbuster sales for the partners.

A major success with just one Sanofi-partnered drug could send Regeneron's bottom line soaring. Roche, on the other hand, is on pace to record about $50 billion in total revenue this year: It takes several blockbusters to move this big needle.

Luckily, Roche may have what it takes. A recent approval of Tecentriq, formerly atezolizumab, for treatment of advanced bladder cancer is a step in that direction. The PD-L1 blocker interferes with a pathway tumor cells use to hide from the immune system, and it's expected to eventually contribute up to $3 billion in annual sales.

Roche also has a first-in-class drug on deck for treatment of multiple sclerosis that could come to dominate this space. The FDA has designated Ocrevus a breakthrough therapy for treatment of primary-progressive multiple sclerosis, an indication without an approved disease-modifying drug. The designation includes a shortened review, and if Roche follows through with plans to submit applications for Ocrevus in the first half, it could begin adding to the company's top line by year-end. At its peak, I expect this game-changer to contribute $5 billion annually to the top line, if approved.

Roche has Regeneron beat hands-down in this department. Although U.S. investors have seen the distribution fluctuate along with currency exchange rates, Roche boasts 29 consecutive annual dividend increases in Swiss Francs. 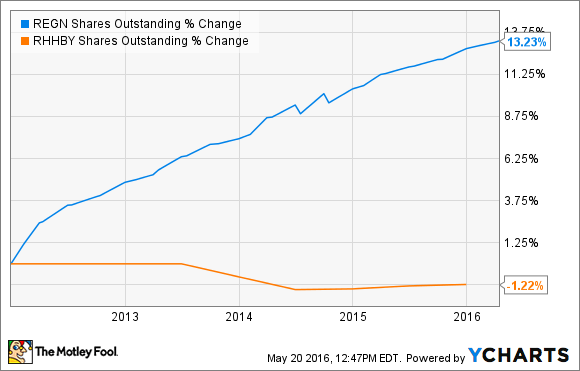 Roche's annual dividend paid on U.S. ADRs is between $1.02 and $0.84, for a yield between 3.2% and 2.7%, depending on your tax situation. Either way, it's better than Regeneron's lack of dividend, and increasing share count that keeps shrinking your slice of future profits.

Regeneron is growing fast, but at recent prices of around 37.5 times this year's earnings estimates, it needs to continue producing results or investors opening positions now could face long-term losses. By the same measurement, Roche is much cheaper than Regeneron and the average stock in the S&P 500.

Considering their different growth rates, comparing their forward price-to-earnings ratios isn't entirely fair. Let's put them on a more even playing field and look at their price-to-earnings growth ratios (the forward P/E ratio divided by the expected earnings-per-share growth percentage during the period). 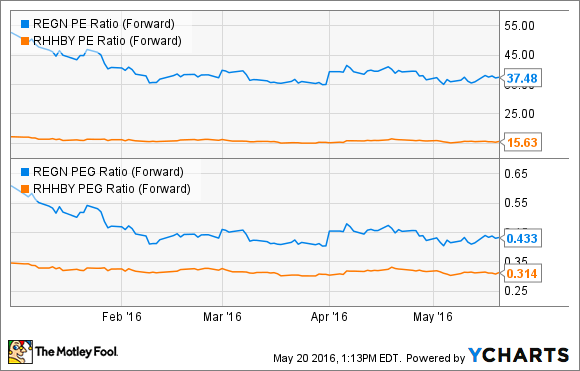 After comparing their PEG ratios, Regeneron looks good, but Roche is offering growth at an even better price. When you consider Regeneron's current exposure to Eylea competition, and Sanofi's less-than-encouraging new drug launch record, its shares are a bit scary at recent prices.

Roche might not have Regeneron's explosive potential, but its value, more predictable growth, and rising dividends make the stock a better buy.