Please ensure Javascript is enabled for purposes of website accessibility
Log In Help Join The Motley Fool
Free Article Join Over 1 Million Premium Members And Get More In-Depth Stock Guidance and Research
By Lee Samaha - May 27, 2016 at 10:06AM

A look at the companies' most recent investor presentations, and how they are both shaping up for the rest of 2016.

United Technologies (RTX 0.95%) and Honeywell International (HON 0.75%) are having a pretty good year so far. Both stocks have outperformed the S&P 500 as initial fears for an industrial recession have abated throughout the year. United Technologies is the cheaper stock, but both look like a good value based on their forward estimates.

Let's take a look at their presentations at the recent Electrical Products Group (EPG) conference, and what management said about their earnings prospects in 2016. 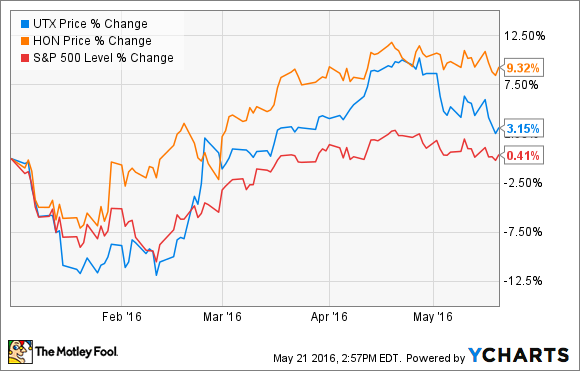 Despite a moderation in global growth forecasts in 2016, both companies maintained full-year guidance at the conference. Honeywell COO Darius Adamczyk revealed that April was running in line with expectations. Moreover, his commentary on each of Honeywell's three segments gave cause for optimism.

Going back to Honeywell's first quarter, the company generated stronger-than-expected overall sales that helped to offset a weaker margin, resulting in EPS at the top of management's guidance range. However, outcomes weren't consistent across each segment.

In Aerospace, Honeywell really is firing on all cylinders, with first-quarter organic sales growth of 3% coming in ahead of expectations for 1% to 2%. That performance seems to be carrying through into the second quarter, with Adamczyk confirming good aftermarket sales due to ongoing growth in flight hours.

In ACS, Honeywell saw an interesting dynamic in the first quarter with strong growth (11% core organic) in its relatively lower-margin building solutions and distribution sales (BSD) while higher-margin Energy, Safety, and Security (ESS) sales growth was flat on an organic basis -- the result was a reduction in margin. When discussing current ACS sales trends, Adamczyk confirmed they are "very good," suggesting the ACS segment can continue to offset any margin compression with stronger sales growth.

The PMT segment is arguably the most problematic. Core organic sales were down 8% in the first quarter, with UOP (formerly known as Universal Oil Products) petrochemical catalyst sales down a whopping 38%. On the earnings call, CFO Tom Szlosek argued that catalyst business growth rates would improve in the second half. In addition, CEO David Cote claimed UOP sales were lumpy because of the lag between orders and sales, but he claimed, "We have a pretty good sense for the year and what happens in the second half versus this first half when it comes to catalysts."

Clearly, order patterns matter, so when Adamczyk updated investors at EPG by saying PMT bookings were good, it's fairly reasonable to assume management's plans for PMT in 2016 are still on track.

The company is less highly rated than its one-time suitor, but the market has good reason. While Honeywell's ability to execute and its strategic direction are rarely questioned, United Technologies' management often fields questions from analysts on both matters -- and CEO Greg Hayes' presentation at EPG was no different. To complicate things further, the company is going through a transitional year in three of its four segments.

Management is using pricing to try to gain market share with Otis in China and defend its high-margin elevator servicing business from local competition. Consequently, Otis unit sales rose 2% in China in the first quarter, while China sales declined 3% -- a classic trade-off of pricing for new equipment sales. At EPG, Hayes argued that Otis is "never going to be the low price leader" in China and is therefore unlikely to drive down pricing in the market overall. Moreover, he declared a willingness to make acquisitions to gain market share.

On a more disappointing note, he outlined that weather patterns in the U.S. hadn't helped residential Heating, Ventilation and Air Conditioning (HVAC) demand in the U.S., and pricing pressure could occur later in the year -- not great news for the Climate, Controls and Security segment.

Pratt & Whitney has to overcome negative engine margin as the initial cost per unit of production on its new geared turbofan engine. However, Hayes argued that the overhaul cycle and aftermarket revenue from the V2500 engine (which powers the Airbus A320 family and is manufactured by a partnership including Pratt & Whitney) should support growth prospects. Meanwhile, putting the geared turbofan engine on Boeing Company platforms remains a possibility -- particularly if Boeing responds to competition from the A321.

Both companies affirmed full-year guidance at EPG, although Honeywell appears to have better sales and earnings traction. Honeywell's Aerospace and ACS segments continue to perform well, while PMT looks set for a better second half -- all good news.

United Technologies has near-term headwinds to overcome, as well as a softer outlook for HVAC sales, and some longer-term considerations with Otis (China) and Pratt & Whitney (geared turbofan production), but so far, the company still appears to be on track in 2016.