Why don't we know as much about our bodies and our own health stats as we know about our cars? This is the question Under Armour's (NYSE:UAA) (NYSE:UA) CEO Kevin Plank has been posing, and why he and his company have been aggressively investing in a digital strategy that will bridge this gap.

"Data is the new oil," Plank recently said. To understand what he means by this, I spoke with Under Armour's Vice President of Digital, Chris Glode. What "data is the new oil" means

Under Armour spent over $700 million to acquire fitness apps in the last few years, and also released an overhauled version of its own UA Record app earlier this year. Under Armour now has over 170 million registered users across its digital platforms, with more than 100,000 added each day. Those users logged more than 8 billion foods and 2 billion activities in 2015. Altogether, this translates into an incredible amount of data at Under Armour's disposal.

Getting all of that data is only step one; it's what that data becomes that matters, says Glode:

The companies that are going to win in digital transformation are the ones that are able to not only generate the most data -- and specifically meaningful data, as there are a lot of companies gathering data for data's sake right now -- but also the ones that are able to refine that data, in the same way that oil as a raw material isn't necessarily useful until you can refine it and process it for an actual purpose. We now have this massive repository of raw materials and we are finding ways to refine that into a more valuable product.

Still in the early days

Glode says that Under Armour is in the early days of figuring out how to refine this "oil," but is continually finding ways to help consumers monitor their health and fitness in a more holistic manner.

Through a partnership with IBM's Watson cognitive computing system, UA Record app members get actionable insights and health tips related to their demographic and recent activities. For example, a sleep-specific alert will come on a day that you didn't hit your sleep goal the night before, and will provide actionable guidance on how to improve. As Under Armour gets more data from users, we can expect this kind of real-time coaching to become more advanced.

How wearables play into this digital strategy

Even with how broadly scoped Under Armour's various apps are, there's a risk that the data is incomplete, since it depends on users to be consistent and accurate in their manual tracking. "The cool thing about wearables is there's no gap in the data," Glode says. "The classic problem with smartphone-based tracking was that you really required the user to hit start/stop." Even when someone doesn't actively record activity or sleep, wearables can still track their motion, sleep, and heart rate to help make a more complete data dashboard."

Under Armour released a suite of hardware devices in January including an activity tracker wristband, connected scale, and shoes that automatically track running stats for you. This first round of wearables is a great start, but Under Armour plans to make more "smart wear" in the future. 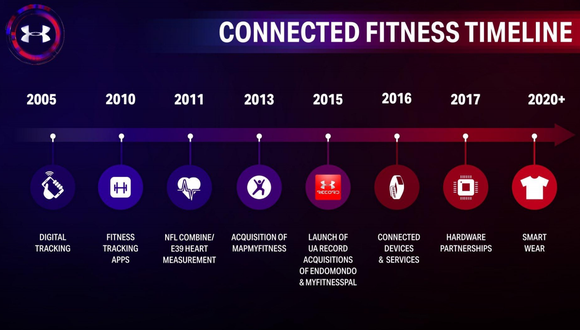 The Under Armour connected fitness growth timeline, as presented in Under Armour's Sept. 2015 investor day presentation. Image source: Under Armour.

"We are skating to where the puck is going by figuring out how we can triangulate the data from multiple sensors on the body," Glode says. Having more sensors and trackers around your body will help provide even more data that Under Armour can mine and turn into valuable output.

Glode says that Under Armour is in a unique position, thanks to its massive and active community.

Other companies in the fitness space are working to advance their own digital strategy as well. Nike recently announced plans to launch a new app this summer that will have more data-driven features than its past apps. Fitbit, which is still the market leader in fitness-tracking wearables by number of units sold, is also working on improving its data strategy.

Still, no other company can come close to Under Armour in terms of total number of users, user engagement, or drive to turn data into a core business component. Even though Connected Fitness accounted for less than 2% of Under Armour's total sales in the most recent quarter, this digital strategy and focus on refined data looks like an incredibly important part of Under Armour's long-term success.

For Under Armour, "Data is the New Oil" @themotleyfool #stocks $UAA $UA Next Article
Current