Fitbit (NYSE:FIT) hasn't been a great stock to own. Shares of the wearables giant are down more than 50% since it entered the public market roughly one year ago. A series of disappointing product announcements and poor earnings reports have fueled a steady decline. In May, Fitbit turned in an earnings report that fell short of expectations, and the subsequent sell-off shaved more than 20% from the share price. 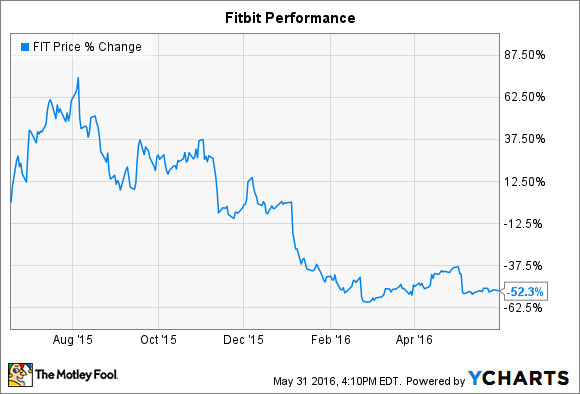 Yet not every number from Fitbit's latest report was bad. Although its business may not be growing as quickly as hoped, some of its core operating metrics are strengthening. In particular, Fitbit's users are increasingly engaged, which bodes well for the company's future.

The problem with Fitbit customers
Fitbit's business faces many challenges. The market for activity trackers is healthy, but competition is intense. At the same time, multi-purpose smartwatches with increasingly compelling fitness tracking features are emerging, threatening to topple the market for dedicated fitness wearables before it has even matured. But a larger hurdle may be Fitbit's own customers, many of whom appear to have given up on the company's products.

In addition to key figures such as revenue, earnings, and device sales, Fitbit reports data on the engagement of its users. In a sense, Fitbit customers can be placed into two broad categories: those who use its products on a regular basis and those who don't. Getting a sense of engagement is difficult and far from an exact science, but Fitbit has attempted to put a number on its user base by creating a category it calls "paid active users".

Paid active users are Fitbit customers who, at some point in the last three months, subscribed to one of Fitbit's premium services, paired a Fitbit tracker or scale to a Fitbit account, logged at least 100 steps using a Fitbit tracker, or measured their weight using Fitbit's scale.

Historically, the ratio of Fitbit's active users to its total device sales has remained around 50%. At the end of its 2015 first quarter, Fitbit had just over 9.5 million active users. At that time, it had sold around 20.5 million devices. There are many possible and valid reasons for the discrepancy -- for example, a user with a single Fitbit account but two devices (say a scale and a tracker) counts for two device sales but only shows up as one active user. But there's also the issue of general fatigue and disinterest. Clearly, some Fitbit buyers are finding themselves less than thrilled with their purchase. Perhaps they received a device as a gift but have little interest in using it. Or perhaps they intended to use it, but after some time, lost interest in tracking their activity. Whatever the reason, it's a problem for Fitbit, as the company derives nearly all of its revenue from device sales.

The market for wearables remains in its infancy -- Fitbit still has many potential customers it could capture in the years ahead. But if many of its users aren't finding the experience compelling, they may be unlikely to return. That means they won't purchase future Fitbit products or recommend them to their friends.

Almost three-quarters of new Fitbit buyers stayed active
But Fitbit appears to be successfully mitigating this problem. During the company's most recent earnings call, CEO James Park offered up some interesting color:

Fitbit sold around 21.3 million devices in 2015, 18 million of which were ultimately registered to Fitbit accounts. At the end of the year, 72% of those accounts fell under the company's paid active user metric. The remaining 28% were inactive. That figure may seem high, but it represents a significant improvement over previous years. Park attributed the gain to the company's investments in software -- the increasingly powerful Fitbit app is offering users a better, more engaging experience.

At the same time, some users who have been inactive are coming back to Fitbit, enticed by its more fully featured products. In the first quarter, Fitbit released two new trackers, the Blaze and Alta. Twenty percent of buyers who purchased those two devices were reactivating previously inactive accounts. Compared to Fitbit's older, simpler trackers, the Blaze and Alta offer more features (such as heart rate tracking, guided workouts, and smart alarms) that may help keep users engaged.

Over time, its users could still lose interest and become inactive, but Fitbit is clearly trending in the right direction.