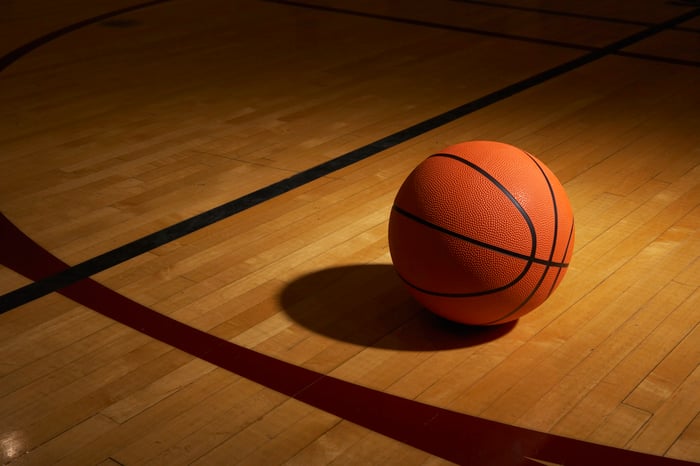 Time Warner's (NYSE:TWX) upcoming Space Jam sequel has the potential to be massive at the box office. It also has apparel giant Nike (NYSE:NKE) in position for a marketing alley-oop.

How much participation Nike will have in the franchise relaunch is unclear, as the company took a somewhat hands-off approach to the first entry in the series, but some manner of team-up appears to be a likely proposition. Nike might benefit from the sequel even if it does not pursue tie-ins with the project.

LeBron James will step into the leading role, and his attachment, along with the film's premise, could make Space Jam 2 one of the biggest box office, merchandising, and cross-promotion megahits of the decade

The original Space Jam movie actually got its start from a series of Nike ads dubbed "Hare Jordan" depicting basketball legend Michael Jordan alongside Bugs Bunny and other Looney Tunes characters. Following a Super Bowl ad that featured Jordan and Bugs teaming up to face Marvin the Martian and his henchmen in basketball and bowling, Jordan's agent David Falk pitched the idea for a feature-length team-up to Warner, and ultimately got the project off the ground after receiving support from the company's consumer products division.

While Space Jam did great things for Warner's Looney Tunes franchise, the movie was first and foremost a Michael Jordan vehicle. Here's Falk's take on the value that the film provided to the Jordan camp:

The 1996 film did help spur more than $1 billion in retail merchandise and product tie-in sales for Warner, and was also a big hit in its own right, with roughly $230 million in un-adjusted ticket sales followed by $209 million in home video sales. As Jordan's agent said would be the case roughly two decades ago, Space Jam also helped endear the superstar to a new generation of fans and helped bridge his cultural significance into a new era.

LeBron James probably isn't thinking much about retirement at this point, but the potential for similar brand-building effects exists for the athlete with Space Jam 2, and that has to be of interest to Nike following the company's more than $1 billion lifetime endorsement deal with the athlete.

For Warner, Space Jam 2 has the potential to restart a valuable franchise at a time when entertainment is booming and the company is looking to build its stable of dependable properties. Significant growth in international film markets, particularly in China where the NBA is the most followed sports league, gives the sequel huge ticket sales potential. If successful, Space Jam 2 could give a long-term boost to the value of Warner's Looney Tunes characters. Getting Bugs, Daffy, and the rest of the gang back into regular action has the potential to be a boon to Warner across multiple segments, with tie-in potential for its Cartoon Network channels and opportunities to reenergize the company's consumer products division.

For Nike, the implications of the film are less clear at this point in production, but still significant. The company took a hands-off approach to the first Space Jam, not producing much in the way of marketing tie-ins and skipping on product placement in the film due to concerns about the movie's handling and the potential for negative brand spillover -- but there's a better than 50-50 chance that the Swoosh will be more involved this time around. Last year saw Nike and Warner's consumer products division team up to relaunch the Hare Jordan ad campaign and launch a special Space Jam edition Jordan sneaker. 2015 also saw Nike endorser Blake Griffin star in an ad for Air Jordan sneakers alongside Marvin the Martian -- a callback to the ad that helped spawn the original Space Jam, and a possible sign that Griffin could be in the sequel.

What needs to happen to send Space Jam 2 into the stratosphere?

Space Jam 2 has a lot to live up to. Opinions regarding the quality of the first film may vary, but the movie was undeniably iconic, and has seen its status grow with time. LeBron James has often talked about his desire to match MJ's legacy, and Space Jam 2 faces some comparable pressures in measuring up to its predecessor.

James is an athlete at the top of his game, and he's already demonstrated himself to be a capable comedic actor, but it's also true that he is not the undisputed face of the game in the same way that Jordan was. Whether or not Michael Jordan will return for a cameo is unknown, but like the original, Space Jam 2 will probably feature a roster of NBA superstars in supporting roles. If Warner can gather a strong ensemble of NBA greats, it would likely do a good deal to elevate the movie's status.

With stars like Kobe Bryant and Kevin Durant on its endorsement roster, Nike once again has potential tie-in opportunities, but Warner and the Swoosh might benefit from taking a light touch to in-film promotion if they choose to go that route. The movie would likely benefit from including some NBA stars who are not Nike-affiliated in its cast, and has greater upside for all involved if it avoids feeling like an ad.

Perhaps most importantly, the movie needs to be fun. Warner has had some difficulty in getting the Looney Tunes cast to seem cool in recent years, but Bugs, Daffy, and others are great characters that could be used to greater effect if reintroduced with the right presentation.

To an even greater extent than most big budget entertainment properties, getting Space Jam 2 to work will require a confluence of factors, but the project also has better-than-average commercial potential if things come together favorably.