Aerie Pharmaceuticals (NASDAQ:AERI) announced on Monday that the Food and Drug Administration (FDA) has accepted for review its application for approval of Roclatan, a combination drug consisting of the company's recently approved glaucoma drug, Rhopressa, and the commonly prescribed glaucoma drug latanoprost. If the FDA OKs Roclatan, Aerie Pharmaceuticals' drugs could become standard care in glaucoma patients. Is this company on the cusp of rewarding investors with blockbuster sales?

Glaucoma is the second leading cause of blindness globally, according to the World Health Organization, and in the U.S., it's responsible for between 9% to 12% of cases. 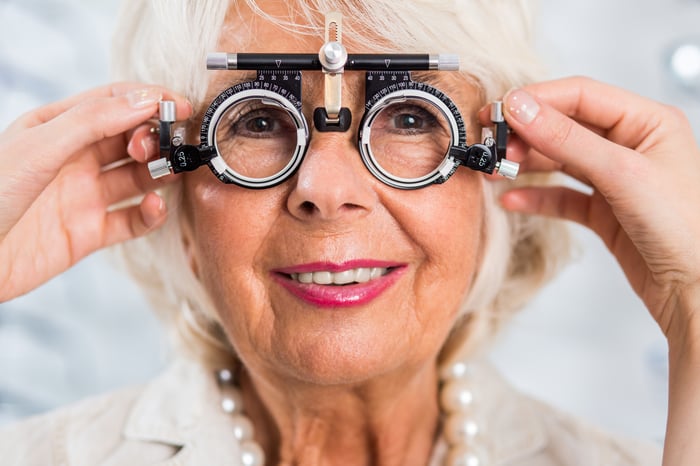 A collection of eye disorders, glaucoma is characterized by increasing fluid pressure in the eye that results in progressive damage to the optic nerve, a group of roughly 1 million nerve fibers responsible for transmitting signals from the eye to the brain. Although eye pressure can vary from person to person, it typically ranges between 12 and 21 millimeters of mercury (mmHg).

The most common type of glaucoma is primary open-angle glaucoma, which develops so slowly that it often goes unnoticed until vision is significantly impaired. It's estimated that 3 million people in the U.S. have glaucoma, but that up to half are unaware of it.

The risk of developing glaucoma increases with age, particularly in people over age 60, so the number of reported cases of glaucoma may increase as baby boomers get older and live longer. If so, then annual spending on glaucoma could increase. Last year, about $3 billion was spent on glaucoma treatment in the U.S., $1 billion in Europe, and $800 million in Japan.

How glaucoma is treated

There's no cure for glaucoma. However, medication can be used to reduce eye pressure and decrease the risk of optic nerve damage, thereby delaying disease progression and, potentially, the need for surgery.

The most common drugs used to treat glaucoma are prostaglandin analogues (PGA), including latanoprost. PGA's don't work for everyone, though, and in those cases, adjunct treatments, including beta blockers, may also be prescribed.

Historically, beta blockers accounted for about 13% of glaucoma prescription volume, but their use may decline this year following the launch of Aerie Pharmaceuticals' first drug, Rhopressa, in April. In trials, a once-daily dose of Rhopressa was as effective as a twice daily dose of timolol in patients with eye pressure readings below 25 mmHg. The easier dosing schedule may convince many doctors to prescribe Rhopressa to improve upon patient adherence rates, thereby improving outcomes.

Rhopressa could have a shot at generating nine figures in sales someday, but it's Roclatan that's the real needle-moving drug investors need to be aware of. In phase 3 trials, Roclatan outperformed latanoprost, suggesting that it could become standard care, if it wins a regulatory OK. Specifically, 60% of Roclatan patients achieved eye pressure readings at one year that were below 16 mmHg versus 35% of patients prescribed latanoprost monotherapy. Because latanoprost accounted for 37% of all U.S. glaucoma prescriptions in 2017, Roclatan could have a good shot at becoming a top seller.

The possibility of racking up sales from having two glaucoma drugs on the market hasn't been lost on investors. Aerie Pharmaceuticals shares have rallied significantly over the past two years following the release of Rhopressa and Roclatan trial data.

The company's $2.9 billion market cap is pricing in a lot of future sales, but Aerie Pharmaceuticals could still be undervalued if Roclatan's FDA review goes off without a hitch. Some caution is warranted, however. There's no guarantee of an FDA approval, and even if it is approved, it can be a year before new drugs get preferred spots in payer's drug formularies. As a result, sales could grow slowly at first.

If so, then investors will want to keep an eye on Aerie Pharmaceuticals' balance sheet. The company's in solid shape now with $334 million in cash exiting the first quarter, but it's spending a lot of money in support of Rhopressa's launch. Last quarter, its cash burn was $50 million and management expects its cash burn to be between $200 million to $210 million this year. Assuming it takes time for its revenue to ramp, investors should, at a minimum, expect Aerie Pharmaceuticals' quarterly losses to continue for a while.