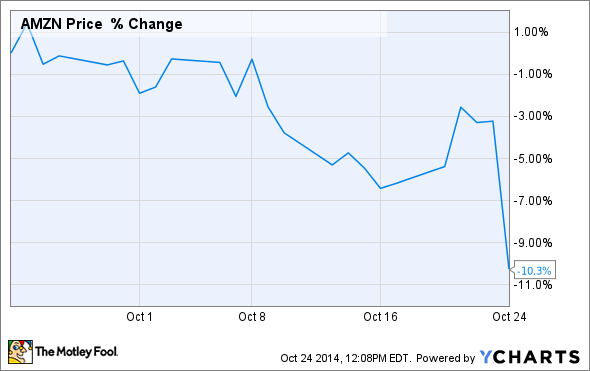 Shares of e-commerce enterprise extraordinaire Amazon.com (NASDAQ:AMZN) are getting hammered in the wake of a second-straight quarterly report that left investors hugely dissatisfied.

I came to Amazon's defense last time, arguing investors ought to think in years, even decades, instead of quarters to properly appreciate the company as an investment. However, any time a stock you follow falls so dramatically, it pays to revisit your thinking.

So, without further ado, let's put Amazon's third-quarter results under the microscope.

Let's start with the worst of it: Amazon's guidance. For the upcoming holiday quarter, Amazon predicts sales growth will slow to somewhere between 7% and 18%. That's a frustratingly wide range, but take the midrange of that guidance (+12.5%) and you can see an alarming deceleration from the 20% increase in net sales Amazon enjoyed in the fourth quarter last year.

Of course, this shouldn't necessarily be a huge surprise to those closely following the Amazon investing narrative. There is fresh evidence that Amazon faces renewed online pricing competition from the likes of Wal-Mart and Target, as many of the largest retail companies refuse to simply allow their rival to walk away with the keys to the e-commerce kingdom. The fight for the future of online retail is getting ugly, and that will likely drag on Amazon in the short and medium terms.

Missing guidance and mounting frustrations
Amazon also missed guidance on the top and bottom line in the third quarter.

Hopefully, most investors aren't overly concerned with the revenue miss here. I think it's fair to say that missing Wall Street's sales forecast by 1% matters a lot less than the aggregate 20% top-line growth it mustered.

Obviously, the bottom-line miss is much more gruesome. But is it really surprising to anyone that Amazon didn't refrain from spending in order to meet an arbitrary expectation set by external financial analysts?

There were some bright spots from Amazon's third-quarter results. Cash flow from operations, arguably a more critical barometer of Amazon's financial viability, grew by 27.2% year-over-year and totaled $1.766 billion. The cloud-based Amazon Web Services usage also grew 90% year over year. I'm not defending this quarter as a resounding success for Amazon. However, I'm also not the least bit surprised by the numbers.

Don't expect anything to change
As I argued following the previous quarter, Amazon's recent quarter very much fits within its overall investment thesis. I've used this chart repeatedly to shed some light on why Amazon continues to spend so mightily to continue to gain share in the e-commerce space.

Ultimately, Amazon understands that its core business area is still very much in its infancy, with online sales representing only roughly 6% of total U.S. retail sales earlier this year. If you realize the extent to which many other countries lag the U.S.' e-commerce penetration rate, it doesn't take huge imaginative leap to grasp the genuine immensity of Amazon's long-run business potential.

CEO Jeff Bezos acutely understands that the company that provides the most customer-friendly experience will ultimately win out in an Internet age that offers consumers a near-ubiquity of buying options for everyday goods. That is why Bezos and the rest of Amazon's management team are willing to continually plow resources into expensive projects like same-day delivery, Amazon Prime content, a network of distribution centers, and the Amazon Fresh grocery deliver service.

Becoming the "everything store" that Amazon so famously desires to be won't happen in short order, or easily. With retail being a notoriously low-margin, high-competition business in which economies of scale offer one of the few competitive advantages, it's probably fair to expect similar quarters out of Amazon in the future. However, as a necessary part in its pursuit of its long-term roadmap, they're also probably not worth too much consternation for Foolish long-term investors.