With the stock market in nearly nonstop rally mode over the past five years, investors did not need to look far to uncover an abundance of growth stocks. But not all growth stocks are created equal. While some could still deliver extraordinary gains, others appear considerably overvalued and could burden investors with hefty losses.

What exactly is a growth stock? Though it's arbitrary, I'll define a growth stock as any company forecast to grow profits by 10% per year or more over the next five years. To decide what's "cheap," I'll use the PEG ratio, which compares a company's price-to-earnings ratio to its future growth rate. Any figure around or below one could signal a potentially cheap stock.

On the surface one thing is clear: Spirit Airlines is a no-frills service. In fact, in a Consumerist.com survey the budget airline came in dead last in all six categories, including leg room and the efficiency of the bag-checking process. Spirit prides itself on being a bare-bones type of operation in which consumers pay a well below average ticket price and then simply add optional fees for services they find important.

Some of the airline's fees are completely nontraditional. For example, fliers with a carry-on bag will pay anywhere from $26 to $45 for their bag if they check it in ahead of time. If they wait to do so at the airport their carry-on bag will run them a brisk $50! Want to select your seat? That's another charge that could cost up to $50. Even having an airport agent print your boarding pass will cost you $10.

In other words, Spirit Airlines charges for practically everything, but in doing so it encourages its passengers to handle the bulk of their pre-flight check-in at home. This means less work for Spirit agents and more service revenue going directly to the airline's bottom line since point-of-sale devices and software handle most consumer requests.

Spirit Airlines also has one of the youngest fleets in the industry. An average aircraft age of 5.3 years means Spirit's planes are more fuel-efficient and spend less time undergoing maintenance.

Between 2014 and 2018, Wall Street expects Spirit Airlines' earnings per share to essentially triple from $3.23 to $9.66, placing the company at just eight times its 2018 profit projections. That's a pretty cheap price to pay for this highflier.

2. Best Buy (NYSE:BBY)
Yes, that really says Best Buy; no, you aren't dreaming. While this big-box retailer is long removed from its glory days, it still has a few tricks up its sleeve that are expected to help its EPS grow by an average of 12% per year through 2018. 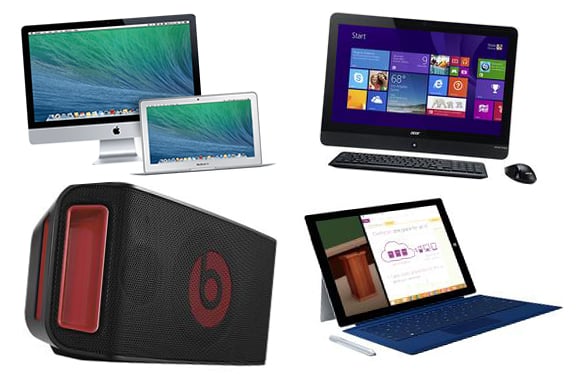 For starters, Best Buy is focusing on a much smaller store layout than before. While this isn't to say it is eliminating its big-box layout, but it has closed 50 of its larger stores in favor of opening 100 smaller, mobile-focused locations. Best Buy's margins might struggle a bit in the near term as it focuses heavily on lower-margin electronics items, but the ability to draw in foot traffic for smartphones and tablets will be well worth the challenge over the long run in terms of creating an emotional attachment with the consumer.

Also, Best Buy has done a good job of making its prices competitive. It began matching prices about two years ago as a direct blow to online retailer Amazon.com, which had been taking Best Buy customers left and right. Consumers had been coming into Best Buy stores, testing out the devices, then buying them from Amazon.com at a discount (this is also known as "showrooming"). In order to nip this in the bud, Best Buy has one of the best price-matching policies around today.

Most important, and the reason why Best Buy's EPS growth has double-digit growth potential, Best Buy is focused on building out its website. Consumers are all about convenience, and Best Buy's online portal can offer a significantly better selection than even its largest store, all from the comfort of a shopper's home. It's a fairly minimal expense, high-margin operation that should increasingly become a larger part of Best Buy's business.

Based on Best Buy's holiday sales results, in which comparable-store sales grew by 2.5% from the previous year, I'd suggest that things are working out nicely.

Currently valued at a PEG ratio below one and a P/E in 2018 of roughly 13, I'd suggest there's still room for some upside left in this cheap growth stock.

The fourth quarter certainly wasn't one to write home about for Terex, with its management team noting that aerial work platform profitability was way down and material costs were up. Some weakness is to be expected considering that Terex supplies equipment to the energy, oil and gas, and mining industries, which have all been under pressure due to lower commodity prices. Additionally, Terex's full-year 2015 guidance of $2.00-$2.30 in EPS is well below Wall Street's consensus. But there's also plenty to be excited about. For example, the U.S. economy is completely back on track, which bodes well for the construction and manufacturing industries to which Terex caters. The U.S. economy has been expanding at a steady pace for some time now, with exceptions for occasional nasty weather, and low lending rates should help make Terex's products more affordable for its customers.

Terex's backlog increased in a big way, even if its fourth-quarter results and 2015 guidance lacked a punch. In its fourth-quarter report, Terex announce $2 billion worth of backlogged orders, up 9.5% from the year-ago period and rising 17.4% from the sequential third quarter. This would suggest demand for Terex's products is still good even if that demand isn't as immediate as shareholders would like to see.