Netflix is a great growth stock -- for some investors. For better or worse, others would be well advised to stay away from this high-flying market darling. See where you stand.

Netflix (NFLX -1.37%) is all over the news right now. A blowout second-quarter report cemented the message from several bullish analyst reports. Meanwhile, David Einhorn took a negative view on the stock and Carl Icahn liquidated his large and profitable Netflix position.

These events send lots of mixed messages about Netflix as an investment. Should you buy Netflix stock at these prices, despite missing out on a double in just six months? Or is it best to stand back and let this risky stock run however far it may -- up or down?

The short answer is, it depends. What follows is the long story. 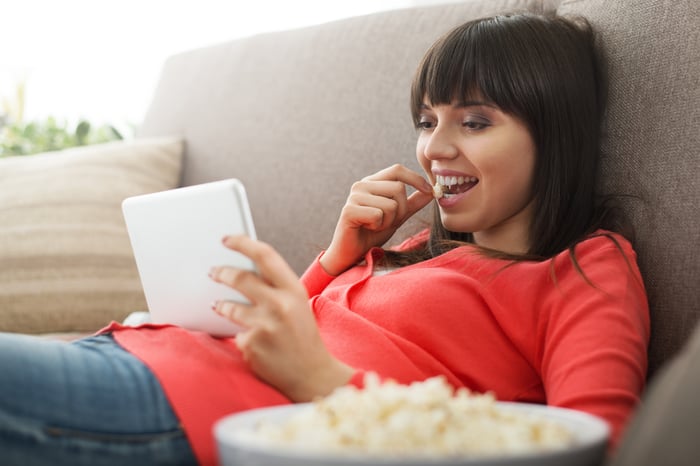 You'll hate owning Netflix stock if ...
The shorter your investing horizon, the less you'll enjoy sticking with Netflix. The same warning applies if you reach for the heartburn medication every time the Dow dips 10 points in an afternoon.

There's no denying that Netflix offers a bumpy ride, and that the short-term returns are far from guaranteed to be positive. The stock may set a lot of all-time highs, but it crashes back down in a hurry quite often.

Over the past five years, Netflix shares have closed at least 10% higher in a single day on 19 occasions (out of 1,258 trading days). On the other hand, the stock also fell more than 10% overnight on nine occasions.

The largest single-day drop? A 35% plunge when Netflix reported the first fallout from the Qwikster debacle. That disaster made fellow Fool Tim Beyers wonder whether Netflix CEO Reed Hastings was fit to lead the company, and Motley Fool CEO Tom Gardner found himself "leaning away from being a committed long-term holder" of this stock. Ouch.

Some of the drops come a little bit slower, but still quickly enough to drive a nervous investor distracted. Comparing Netflix stock's closing price to the highest price set in the past 30 market days, Netflix shares sat at least 10% below these recent highs on 440 occasions. That's 36% of the time, spent looking back with longing at significantly higher market prices.

Many investors prefer a slow and steady climb to higher value, but Netflix stock spends only 6% of its time within 10% of recent highs and lows. The rest of the time, you're looking at dramatic swings -- sometimes up, sometimes down, but almost always wild.

If that's not your bag, then neither is Netflix. Don't invest money here that you might need to use on short notice. Share prices may dip steeply at any time and don't always recover quickly. That's the nature of the investing game in general, only more so for a volatile ticker like Netflix.

Furthermore, Netflix isn't known for its rich earnings and massive cash flows. Right now, the company is investing every spare dollar into its ambitious overseas expansion program, which should see Netflix streaming services becoming available in pretty much every nation on Earth within the next two years. Only a few pennies per share are kept for the bottom line, and Netflix stock currently trades for more than 200 times trailing earnings.

So if you're into traditional value metrics, that's a big red flag. Greenlight Capital investing guru David Einhorn falls into this camp, for example. There's no shame in backing down from a top stock if it doesn't fit your investment criteria -- even if those principles turn out to be overly defensive. Risk is risk.

But you'll love holding Netflix shares if ...
All that being said, there are many other investor profiles who would find Netflix irresistible right now.

In particular, domestic growth came in 50% stronger than expected, throwing cold water on the notion that this key market is getting saturated. Unless another total disaster in the Qwikster vein comes along, the company is on track to reach at least 60 million domestic subscribers by 2018. That's far ahead of the 2020 timetable several bullish analysts recently set for that benchmark.

Abroad, Netflix still aims to offer its service worldwide by the end of 2016, with an asterisk next to the tricky but important Chinese market. It's a big world out there, and the domestic market doesn't hold all the keys to Netflix's future.

For now, that ambitious expansion project adds plenty of costs to the quarterly tallies, but Hastings expects the red ink to turn black once the overseas rollout is finished. By 2020, there will likely be several hundred million Netflix subscribers overall and annual earnings in the billions of dollars.

By then, Netflix would look crazy cheap at roughly $115 per share, which is where the stock stands right now. As the business expands and then shifts into profit-generating mode, the share price should continue to climb as well.

Granted, investors are already baking plenty of this future promise into today's share price. As I explained earlier, it won't be a smooth ride to the top. But every time you see Netflix stock dropping 10% in a single day, as it did nine times over the past five years, remember the 19 times Netflix jumped up that far in a single day. That volatile nature cuts both ways.

Growth stocks often command large price premiums for their promised future gains, and Netflix stands firmly in that camp. Opportunistic investors can wait for the next big drop before loading up on Netflix shares, as I did in 2011 when Tim and Tom worried about the company's future. "Guess what just joined my screaming buy list?" I said, and expanded my Netflix holdings as soon as our Foolish trading and disclosure rules allowed it. That particular batch of shares is currently a ten-bagger in my portfolio, and my overall Netflix holdings are up sevenfold.

But market timing is often futile, and there's nothing wrong with simply buying Netflix at the top, either. The next big drop might be a long time coming and may not dip below the current level. You just never know.

"So many investors see stocks going up, up, up and figure they've missed the opportunity," said David Gardner in 2005. "But winners tend to keep on winning." The best investment of David's career (at the time -- he has gone on to many more victories since) rose a hundredfold after he missed out on a quick quadruple. It's never too late to catch a true growth rocket, and that includes Netflix today.

So whether you like to catch the momentum of a growth story or prefer to buy volatile stocks on big dips, Netflix can deliver. The key is to keep a long investment horizon and plenty of patience with occasional price drops in between. As long as you don't lock in those low prices by selling your shares, those speed bumps can be ignored.

Do keep an eye on the business for signs that Hastings is losing his vision and focus, of course -- that would be a real "sell" signal. Otherwise, Netflix is a fast-moving stock for the ages.