Today there are more than 300 biotech stocks listed on the major exchanges. They often come with a lot of risk -- most aren't profitable yet, and their valuations are predominantly based on the peak annual sales projections of drugs that could be years away from reaching pharmacy shelves.

Of course, every once in a while you can locate a true gem within the biotech sector. I believe one such stock is biotech blue-chip Celgene (NASDAQ:CELG). Although Celgene still possesses a handful of the standard risks you'd expect any drug developer to contend with -- competition and finite periods of patent protection -- it also sports 10 (yes, 10) reasons why it could be an easy stock for investors to fall for.

Let's take a brief look at all the reasons why I believe Celgene could be a great long-term investment.

1. The rock-steady trio
Forget the dynamic duo -- Celgene has a "triumphant trio." Multiple myeloma drug Revlimid, cancer drug Abraxane, and anti-inflammatory drug Otezla make up the bulk of Celgene's top-line, with Revlimid estimated to hit $7 billion in annual sales by 2017 and both Abraxane and Otezla coming in between $1.5 billion and $2 billion a piece. Otezla's launch has thus far been flawless, and both Revlimid and Abraxane continue to maintain or gain market share in their respective indications.

Translation: this is one rock-steady trio of drugs.

2. Label expansion opportunities
The aforementioned trio is also a big reason why Celgene is forecasting organic sales growth of roughly 20% per year over the coming three to five years. Aside from improving demand and pricing power in existing indications, all three drugs have new indications that they could soon be approved for.

Revlimid is being studied for eight new labels, including first-line follicular lymphoma, Abraxane may be expanded into first-line triple-negative metastatic breast cancer, and Otezla is being examined in a half-dozen additional indications, including rheumatoid arthritis and ulcerative colitis. Label expansion can extend the life of a drug and help a drug innovator minimize the pain associated with patent expirations.

3. Novel drug development
On top of a rock-solid drug portfolio and the prospect of label expansion, Celgene also has a deep portfolio of new molecular entities that it could bring to market.

For example, GED-0301, an oral drug designed to treat Crohn's disease, demonstrated impressive efficacy in a midstage study. Celgene, which presented its analysis at Digestive Disease Week in May, noted that 62.5% of patients with disease duration of at least five years went into remission by week two on the 160 mg dose compared to just 15.4% of placebo patients. And there are plenty of other novel therapies where this came from in Celgene's pipeline.

4. Collaborations
Understandably, even biotech companies with the deepest pipelines and pockets imaginable can't be everywhere at once. That's why Celgene has taken the humble approach to drug development and has in the neighborhood of 30 collaborations ongoing that could give it the right to license game-changing cancer, immunology, and anti-inflammatory drugs.

It's tough to argue that one collaboration is more worthwhile than the next, but of special importance/intrigue is Celgene's $1 billion partnership with Juno Therapeutics in CAR-T research; its potentially $3 billion-plus collaboration with OncoMed Pharmaceuticals and its anti-cancer stem cell research; and its licensing of a handful of experimental leukemia therapies from Agios Pharmaceuticals. Celgene only needs a few of its partnerships to pay off for its entire collaborative strategy to be a success.

5. Acquisitions
Celgene doesn't often make acquisitions, but when it has they've made a materially positive impact to its bottom-line. Most recently it acquired Receptos for $7.2 billion. But it's the company's $2.9 billion purchase of Abraxis BioScience in 2010 that really looks like a genius move.

Buying Abraxis allowed Celgene to get its hands on cancer drug Abraxane, which in the year prior to the Celgene buyout had generated $315 million in sales. However, due to its label expansion into first-line pancreatic cancer and first-line non-small cell lung cancer, it'll probably generate between $1.5 billion and $2 billion in sales in 2017. That's a sound investment return for Celgene, and another reason to fall in love with this stock.

6. Share repurchase program
Celgene's management has publicly stated in conference calls that it doesn't intend to pay a dividend anytime soon, but that doesn't mean it's not looking for ways to increase shareholder value.

In June, Celgene announced that it had authorized the periodic repurchase of up to $4 billion worth of its common stock. This comes on top of the $1.2 billion that was remaining on a prior repurchase plan when the announcement was made. All told, if Celgene were to make good on the full amount of its buyback (the cumulative $5.2 billion), it could potentially boost its EPS by as much as $0.28 per share (buying back common stock reduces the number of outstanding shares), which could make Celgene look even more attractive to investors.

7. CEO Bob Hugin's compensation package
Let's be clear that Robert Hugin was well-compensated for his leadership at Celgene, at least over the past two years. According to The New York Times, Hugin was paid $24.2 million in total compensation last year, up from $21 million in 2013. Then again, Celgene's stock rose 115% in 2013 and another 32% last year, and it's up a few percentage points in 2015 despite the broader market being down, so it's plausible Hugin's pay is well-deserved.

Also, one difference between Hugin and a lot of his peers is that much of his compensation package is paid out in bonuses and common stock as opposed to being heavy on options. This reinforces that company performance will dictate his pay, and by directly paying him in common stock it also immediately ties Hugin's interests in with those of Celgene's shareholders.

8. Celgene's Glassdoor rating
It's often been said that a happy workforce is a productive workforce. According to Celgene's Glassdoor rating -- Glassdoor is an online site that gives employees an opportunity to sound off about the pros and cons of their company -- it's no wonder that Celgene's pipeline has been so productive in recent memory. More than three-quarters of the 130 reviewers would recommend working for the company to a friend, and a whopping 96% of the 54 reviewers who rated CEO Bob Hugin approved of his performance. That's a substantial shot of confidence if I've ever seen one.

9. Falling short interest
Another vote of confidence for Celgene is that short-sellers, or traders who make money by betting against a stock and hoping for its share price to fall, have been decreasing in number. 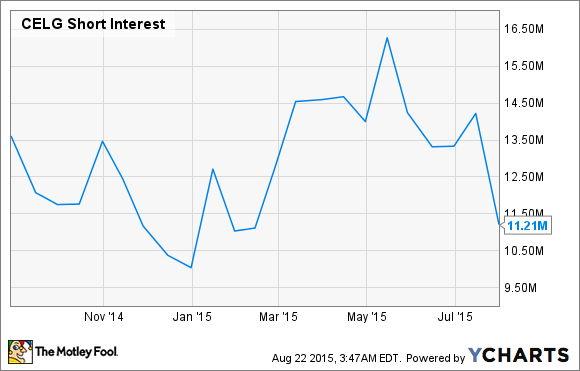 10. Valuation
Finally, it's a simple case of valuation. Celgene's forward P/E of 20 might not scream "value" right off the bat, but let's remember that Celgene is growing by 20% per year. This works out to a PEG ratio of about one, which is actually inexpensive compared to other (profitable) biotech stocks. With Celgene's revenue expected to double by 2020, and its EPS forecast to rise by more than 150%, Celgene's valuation arguably remains very attractive.

Combined, these 10 reasons lead me to believe that Celgene has all the tools necessary to head even higher.