In his upcoming new book The New Digital Age, Eric Schmidt leaves no doubt about his feelings toward China: China is a dangerous and "menacing" superpower that is "the world's most active and enthusiastic filterer of information", and also "the most sophisticated and prolific" hacker of foreign companies.

All this from the former CEO and current executive chairman of Google (NASDAQ:GOOGL). But if that's really the case, then why has Google curtailed its censorship fight and seemingly accepted self-censorship? And why has it partnered with the reviled Qihoo 360 (NYSE:QIHU.DL)? The answer is simple: Google still wants to profit from the menace it despises.

Meet Google: Just an ordinary Chinese tech company
For some time now, watchers have questioned how "good" a company Google really is. So when the company came out with a simple, but forceful, user warning about Chinese censorship in May 2012, some took it as a clear sign that Google was and would forever be a righteous company.

Then sometime between Dec. 5 and Dec. 8, 2012, Google raised the white flag in its Chinese censorship war. Now when Chinese users search for banned or sensitive words, they'll no longer see this warning: 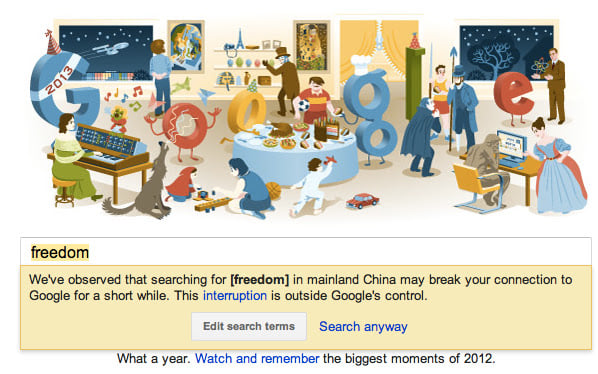 When contacted about the removal, Google cited concerns around "user experience" and declined to comment further. But no further details are needed, as the facts speak for themselves.

Since working in China, Google has had it tough. With concerns of Chinese hackers and censorship, Google moved its search engine to Hong Kong in 2010. The result? Google's YouTube, Google Plus, and thousands of search services were blocked anyway. Though Google may have been fine with that at first, it clearly isn't anymore -- in the past year, Google's search market share plummeted from 16.2% to 5%.

That's all thanks to new Chinese competitor Qihoo. Since launching its search engine in the summer, anti-virus and browser maker Qihoo instantly captured 10.4% of the search market, becoming the No. 2 search engine in China. Qihoo continues to bolster its search and its other services by building an all-encompassing ecosystem with maps, smartphones, and its mobile operating system.

In response to its dwindling market share and future potential for profits, it's understandable why Google would give up the censorship battle -- you can't win in China unless you play by China's rules. Yet by doing so, the company is (as the GreatFire.org puts it) self-censoring itself.

In the process, Google is becoming an ordinary Chinese tech company -- as long as you're making a profit, there's nothing immoral about enabling the China "menace." But it doesn't make you "good," either.

Is Google being "evil"?
If you thought Google couldn't sink lower morally, then let me tell you about the company's new partnership with Qihoo (announced Jan. 18).

While Google now has access to Qihoo's search through its ad platform and will receive a cut of any sales from the partnership (Qihoo will still maintain its own sales network, but management expects the two monetization models to co-exist for some time), Google is still partnering with Qihoo.

Yes, Qihoo. The same Qihoo that uses its security software suite to scare Chinese Internet users into downloading its 360 Browser. The same company that stole Microsoft's Internet Explorer logo, painted it green, and slapped it onto its 360 browser to steal market share. And the company that Beijing issued an official warning against to end these "unfair" competitive practices. In short, Google partnered with the one company that is as close as it comes to "evil" in the Chinese tech sector.

Google has overlooked any competitive and moral qualms it has had with Qihoo because it's really scared of Baidu (NASDAQ:BIDU).

Taking a step back, Qihoo's advances into creating a complete ecosystem are far from done. The company has outsourced its maps and its mobile operating system is far from encompassing. So any advances Qihoo may have in search may only be in search, not into other growth areas.

On the other hand, Baidu has outdoor and indoor maps, launched several smartphones, and released several versions of its mobile operating system. Recently, the company reached a huge milestone in December when it released its Lenovo Phone, which has a slick, Nexus-killing design and revamped Baidu Cloud operating system. In short, Google's afraid that Baidu's technological ecosystem may force the Mountain View giant to close its Chinese doors soon. But before it does, Google had to try something, even if that meant working with Qihoo.

Nonetheless, Google may be a profitable "menace"
If China is as terrible as Eric Schmidt thinks it is, then I'm surprised that Google would continue on its newfound immoral path. By essentially self-censoring itself, Google has abandoned would-be underground revolutionaries looking to plot the next anti-government demonstration. And by partnering with the "unfair" Qihoo, Google forfeits any credibility it has in wanting to "do good" in the world. Rather, Google seems to simply be looking out for the bottom line in China: Do anything to beat out Baidu -- even if that means becoming a "menace."

Of course, you can't blame Google. It is a profit-seeking company, after all. And from an investment standpoint, it makes sense. Although Google's Android platform is on about 90% of smartphones in China, that hasn't translated well to increased revenue. By playing by China's rules and gaining access to more search data through Qihoo, Google may be able to make itself a real player in the future. Maybe then, Google might remember its motto: "Don't be evil."