Mortgage rates were broadly unchanged on Tuesday, but data from the housing market points to increasing strength, as existing-home sales hit their highest level in a decade in October.

The headline mortgage rates were broadly unchanged on Tuesday. The average 30-year mortgage rate is 3.95%, which equates to a $474.54 monthly payment per $100,000 borrowed, or $26.05 higher than the equivalent payment would have been a month ago.

Mortgage rates were unchanged on Tuesday; existing home sales hit their highest rate in a decade in October

Tuesday produced more evidence that the housing market continues to strengthen, with the release of the National Association of Realtors' (NAR) October Existing-Home Sales. The headline statistic: Total existing-home sales rose 2% (seasonally adjusted annualized rate) from the previous month to 5.60 million, which surpasses June's cyclical peak and is the highest rate in close to a decade (since Feb. 2007, to be exact). Existing-home sales are based on closing transactions of single-family, townhomes, condominiums, and cooperative homes.

A three-year graph shows that the trend in home sales has clearly been improving: 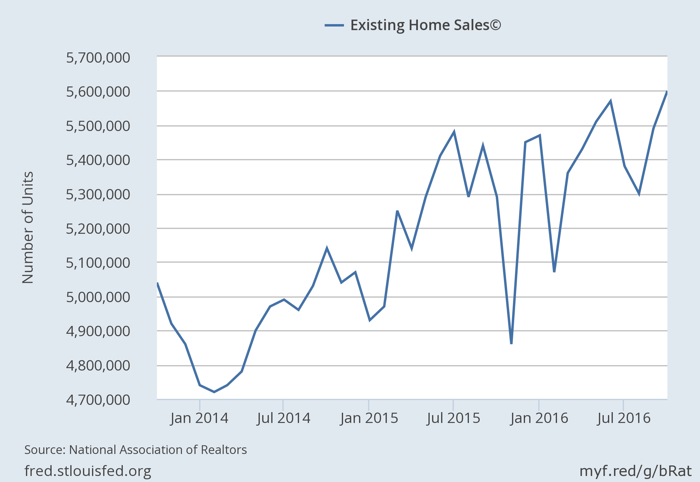 (Yes, the graph displays substantial volatility, but that's to be expected since these are annualized monthly readings, i.e., month-to-month changes are magnified. Furthermore, the graph would look a lot less volatile if the y-axis started at zero instead of 4.7 million.)

Buyers are having more success lately despite low inventory and prices that continue to swiftly rise above incomes. The good news is that the tightening labor market is beginning to push up wages and the economy has lately shown signs of greater expansion. These two factors and low mortgage rates have kept buyer interest at an elevated level so far this fall.

Mind you, October was the last full month prior to the presidential election, which has dealt us a new card in the shape of a run-up in mortgage rates. The interplay between the the rise in mortgage rates and home prices and the (expected) rise in incomes will ultimately determine the impact on the housing market. Nevertheless, prospective homebuyers need to focus only on their own situation and take the long view.