The U.S. and its allies want more of the advanced attack jet.

The F-35 Joint Strike Fighter lies at the core of the United States' defense strategy. The stealth fighter jet will serve key roles for the U.S. Air Force, Marine Corps, and Navy, as well as about a dozen other countries' militaries.

The F-35 is scheduled to remain in service until at least 2070. During this time, the Joint Strike Fighter program is expected to generate well over $1 trillion in revenue for Lockheed Martin (LMT 0.33%). The defense contractor recently made significant progress on this front when it finalized a new $34 billion production agreement with the Pentagon earlier this week. 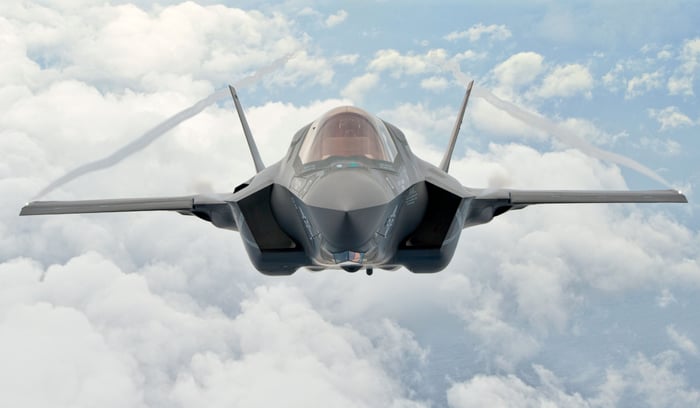 The agreement calls for Lockheed Martin to produce and deliver 478 F-35s. This includes 291 aircraft for the U.S. military, 127 for international partners that contributed to the development costs of the F-35, and 60 for foreign military sales customers.

"Driving down cost is critical to the success of this program. ... This agreement achieves an average 12.7% cost reduction across all three variants and gets us below $80 million for a USAF F-35A by Lot 13 -- one lot earlier than planned," Air Force Lieutenant General Eric Fick said in a press release.

These cost reductions should help to stem criticism from opponents of the F-35 weapons program, some of whom have argued that defense budget funds would be better invested in less-expensive previous-generation weapons systems.

In addition to its reduced cost, the F-35 has been winning accolades for its strong performance in military training exercises. In turn, senior Defense Department officials have voiced their support for the weapons program.

"I have full faith and confidence in the F-35 program and our ability to deliver F-35 combat capability anywhere in the world," Under Secretary of Defense for Acquisition and Sustainment Ellen Lord said on Oct. 29. "Make no mistake, the F-35 is the world's most advanced, lethal, and interoperable aircraft ever developed."

With its vital position within the U.S. defense strategy well secured, and with the program achieving its operational and cost targets, the F-35 should remain a powerful profit driver for Lockheed Martin -- and its shareholders -- in the decades ahead.