Shares of Shake Shack (NYSE:SHAK) were shellacked on Tuesday. The burger chain's third-quarter results, forward guidance, and plans for delivery and store remodels all provided cause for concern for investors.

However, same-store sales -- which Shake Shack defines as sales from restaurants open for 24 months or longer -- increased only 2%. That was below analysts' expectations of 2.5%. Traffic rose only 1.2%, and the remaining growth was driven primarily by price increases. 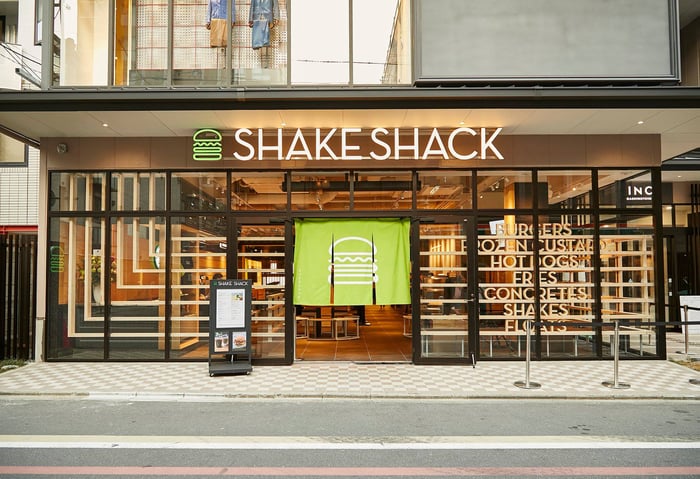 Shake Shack's decision to use only one delivery partner -- Grubhub (NYSE:GRUB) -- is weighing on its sales growth. The burger chain is ending its partnerships with other delivery companies, including DoorDash, Postmates, and Caviar.

"We believe the transition to Grubhub caused some noise in our Q3 numbers and will certainly have an impact through the fourth quarter and into next year," CEO Randy Garutti said during a conference call with analysts. "As we remove direct point-of-sale integrations with DoorDash, Postmates, and Caviar, we expect an impact to our delivery revenue, especially in those regions where Grub may not be the current market leader."

Due in part to these challenges, Shake Shack reduced its full-year guidance for same-store sales to 1.5% from 2%. Garutti said that Shake Shack would need to convince many of its customers to switch to Grubhub from competing platforms. "We've got a lot of people who've built up behaviors on other marketplaces," Garutti said. "We're going to need to move them over to Grub. That's a lot of work, a lot of time, and it's going to be a real project here for a while."

Meanwhile, analysts are concerned that Shake Shack's decision to hitch itself to just one delivery company could be a risky bet. GrubHub's recent warnings of slower growth amid intensifying competition are only serving to stoke those fears. "It was surprising that Shake Shack would just partner with one [delivery company] when the trend industrywide is to work with multiple platforms," Wedbush analyst Nick Setyan told the New York Post.

The company's store renovation plan is likely to further pressure profits in 2020. Shake Shack intends to temporarily close some of its restaurants for upgrades next year.

"During these remodels, we'll be updating and improving layout to ensure optimal flow for multiple ordering channels, upgrading our kitchen equipment to maximize throughput, and installing kiosks to bring even further convenience to the guest experience," Garutti said. "Some of these will include temporary closures that will be incorporated into our total revenue outlook for 2020, and we'll come back to you with the specifics around that on our next call."

Many investors apparently didn't want to wait until Shakes Shack's next earnings call to hear more details -- and instead decided to sell their shares of this restaurant stock today.