Apple (NASDAQ:AAPL) investors are in store for a fun holiday season.

Citigroup (NYSE:C) says blockbuster sales of the tech titan's AirPods and Apple Watch products are likely to fuel higher-than-expected revenue and earnings during the holiday quarter. In turn, the investment bank reiterated its buy rating on Apple's stock and boosted its target price from $250 to $300. 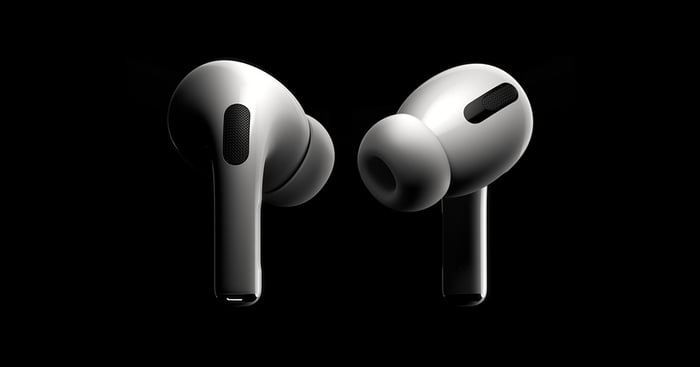 Apple recently unveiled a "Pro" version of its popular AirPods. The wireless headphones contain noise cancellation features and more options for fitting than regular AirPods do. The device has received favorable reviews, and early demand has been strong despite its relatively hefty $249 price tag.

Meanwhile, new health-focused features -- such as apps that monitor heart rhythms and blood sugar levels -- are helping to spur sales of Apple's smartwatches. Some health insurers are even providing subsidies for the device, making it affordable for more people.

Together, these factors are helping to make AirPods and the Apple Watch "some of the hottest products across all product segments" during the holiday shopping season, according to Citi.

For the full year, Citi forecasts that Apple will generate fiscal 2020 earnings per share of $13.26, well above the consensus estimate of $12.23.

More than 105 million smartwatches will be sold annually by 2023, according to research firm IDC, up from 66.5 million in 2019. With a market share of roughly 50%, Apple is positioned to profit from the growth of this segment more than any other company.

New competition from Google parent Alphabet (NASDAQ:GOOGL) (NASDAQ:GOOG) shouldn't be overlooked. The internet search giant and owner of the Android mobile operating system recently acquired fitness tracker and smartwatch maker Fitbit (NYSE:FIT) for $2.1 billion. The combination of Alphabet's software and Fitbit's hardware could make for an intriguing combination for consumers.

Yet despite the intensifying competition from an Alphabet-supported Fitbit, Apple is likely to enjoy significantly higher sales of its smartwatches in the years ahead. Moreover, Apple's booming wearables business is helping to expand its already massive base of installed devices. This, in turn, is strengthening Apple's ability to sell more of its high-margin services. "We now have 450 million paid subscriptions across the services on our platform compared to over 330 million just a year ago, and we are well on our way to our goal of surpassing the 500 million mark during 2020," CEO Tim Cook said during Apple's fourth-quarter earnings call.

With its wearables and services businesses growing rapidly, Apple's stock could easily hit -- and surpass -- Citigroup's $300 target price in the months ahead.