Smart people do silly things with money all the time, but some mistakes can be much worse than others. We asked three of our experts what they consider to be the top money mistake to avoid, and here's what they had to say.

Dan Caplinger
The most pernicious financial trap that millions of Americans fall into is getting into too much debt. Unfortunately, it's easy to get exposed to debt at an early age, especially as the rise of student loans has made taking on debt a necessity for many students seeking a college education.

Yet it's important to distinguish between different types of debt. Used responsibly, lower-interest debt like mortgages and subsidized student loans can actually be a good way to get financing, helping you build up a credit history and allowing you to achieve goals that would otherwise be out of reach. Yet even with this "good" debt, it's important to match up your financing costs with your current or expected income, rather than simply assuming you'll be able to pay it off when the time comes.

At the other end of the spectrum, high-cost financing like payday loans should be a method of last resort for borrowers, given their high fees. Even credit cards carry double-digit interest rates, making them a gold mine for issuing banks while making them difficult for cardholders to pay off once they start carrying a balance. The best solution is to be mindful of using debt and to save it for when you really need it.

Jason Hall
It may seem like no big deal, but cashing out your 401(k) early has major repercussions and leads you to have less money when you'll need it most: in retirement.

According to a Fidelity Investments study, more than one-third of workers under 50 have cashed out a 401(k) at some point. Given an average balance of more than $14,000 for those in their 20s through 40s, we're talking about a lot of retirement money that people are taking out far too early. Even $14,000 may seem like a relatively easy amount of money to "replace" in a retirement account, but the real cost is the lost opportunity to grow the money.

Think about it this way. If you cash out at 40 years old, you aren't just taking out $14,000 -- you're taking away decades of potential compound growth: 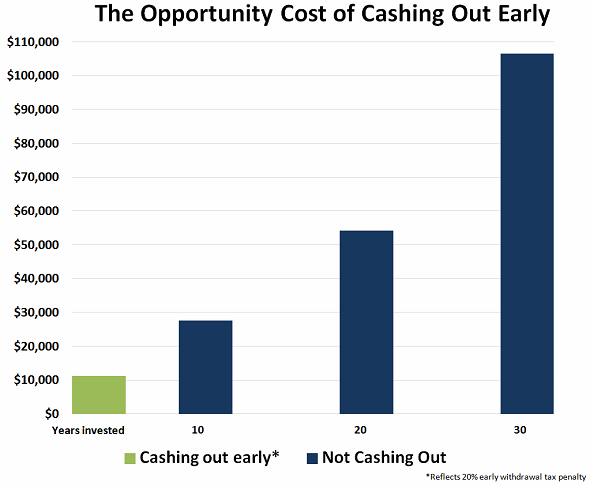 Returns based on 7% annualized rate of return, which is below the 30-year stock market average.

As you can see, the early cash-out costs you dearly in future returns; the earlier you do it, the more ground you'll have to make up to replace those lost returns. Don't cash out when you change jobs. Instead, roll those funds over into your new employer's 401(k) or an IRA to avoid any tax penalties, and let time do the hard work for you. You'll need that $100,000 in retirement a lot more than you need $14,000 today.

Dan Dzombak
One of the biggest money mistakes you can make is going without health insurance.

While the monthly premiums can seem like a lot, you're taking a massive risk with your health and finances by forgoing health insurance. Medical bills quickly add up, and if you have a serious injury, it may also mean you have to miss work, lowering your income when you most need it. These two factors, as well as the continuing rise in healthcare costs, are why a 2009 study from Harvard estimated that 62% of all personal bankruptcies stem from medical expenses.

Since then, we've seen the rollout of Obamacare, which signed up 10.3 million Americans through the health insurance marketplaces. Gallup estimated last year that Obamacare lowered the percentage of the adult population that's uninsured to 13.4%. That's the lowest level in years, yet it still represents a large number of people forgoing health insurance.