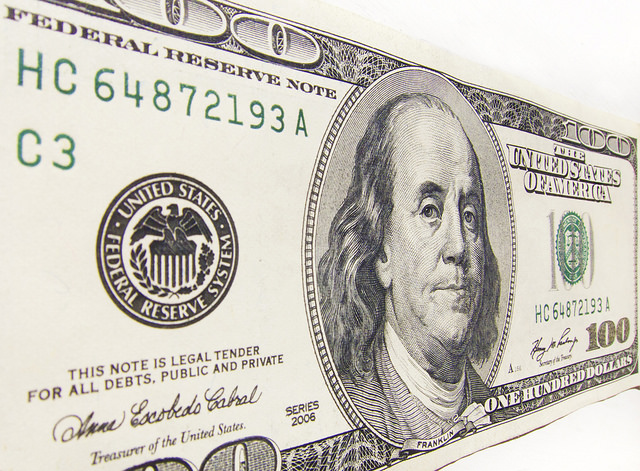 It's no secret that Americans aren't great savers. Although personal savings rates in the U.S. have improved since they dipped below 2% in 2005, the current going rate of 4.8% as of June is well below that of other developed nations such as Germany and France.

But, what if you did have money to spare -- would you know what to do with it? Some Americans truly don't have an answer. So with that in mind, today we're going to take a brief look at 10 clever money moves you can make with only $100 that could save you, or make you, a considerable amount of money.

One ingenious move you can make with the $100 in your wallet is to put it toward your highest-interest credit card balance. Considering that the interest rate on most credit cards is variable these days, and that lending rates are probably heading higher sooner than later, this could be an immediate money-saving move.

2. Open or add to an emergency fund
In June of last year Bankrate published startling findings in its monthly Financial Security Index that showed only 23% of respondents had six or more months of liquid savings in case of an emergency. Worse yet, half of all respondents had either zero emergency savings or so little in savings that they could cover only three month or less in expenses.

The idea? Take that $100 and begin building an emergency savings account, or add to an existing account. By itself the $100 is unlikely to protect you in case of a financial emergency, but you have to start somewhere; so why not now?

3. Get a checkup with your doctor
Aside from saving your life, getting an annual physical with your doctor (which can arguably have a wide range of costs, but is likely to be around $100) could also save you a boatload in long-term medical costs.

How? Going to the doctor early and often means your primary care physician has an opportunity to catch chronic and/or potentially life-threatening conditions before they become serious and costly. Keeping up on your health could save you serious amounts of money later in life.

4. Open or add to an IRA
Want another novel idea? How about putting that $100 toward your retirement by opening or adding to an individual retirement account, or IRA.

There are two primary types of IRAs, and you'll need to do some digging to see which one works best for you. A Traditional IRA can give you an upfront tax benefit and allow your investments to grow on a tax-deferred basis until you begin making withdrawals in retirement. In contrast, a Roth IRA has no upfront tax benefits, but it can allow your investments to grow completely free of taxation. To get a better idea of the contribution, income, and withdrawal rules I encourage you to visit the IRS' website.

5. Donate it
Still not sure what to do with the $100 in your wallet? Why not consider donating it to a charity of your choice!

Donating money not only gives you a sense of accomplishment in that you're supporting a cause you strongly believe in, but it can also save you money come tax time. As long as the charity you're donating to is a 501(c)(3) according to the IRS, then you can legally write off your donation, which will show up a deduction against your taxable income when you prepare your taxes. And a word to the wise: make sure you save your donation receipt!

What can you really do with $100? How about fixing a leaky faucet, or caulking around your showers, bathtubs, windows and sinks. Plumbing and or wood rot problems can lead to extremely costly repairs down the line, so it's best to attack these issues early before they become a real money drain.

Another idea? Buy a smart thermostat. While most go for more than $100, a quick online search turned up the Honeywell 7-day Wi-Fi programmable thermostat for as low as $99. This thermostat allows for convenient control via a smartphone or tablet, and its programmable settings could save you a lot of money on your energy bill.

7. Put it toward a 529 plan for your kids
You could always consider taking your $100 and put it toward a college education savings plan, such as a 529, for your children. College costs seemingly keep rising, so saving early and often is the key to ensuring your children will have the capital needed to attend the college of their choosing.

But, opening or adding to a 529 plan has other advantages, too! Qualified withdrawals (such as tuition, fees, and textbooks) are completely tax-free, and contributions to a 529 may be tax-deductible depending on the state you live in.

8. Invest in yourself
No one said you couldn't be selfish! You could always consider taking the $100 in your wallet and invest it in yourself.

While buying a new outfit might be what you had in mind, my suggestion is along the lines of bettering yourself by purchasing books that expand your knowledge in your career field, attending a conference related to your career, or even taking a relevant community college class. Taking the initiative to improve yourself certainly can't hurt your on-the-job performance and it could even land you a raise or promotion down the road.

An automatic investment account doesn't focus on market timing (which is a good thing, by the way). Instead, an automatic investment broker deducts a pre-specified dollar amount every week, two weeks, or month (as specified by you) and invests your money in stocks or mutual funds of your choosing for a low commission rate. Automatic investment sites, such as Capital One Investing (formerly ShareBuilder), also allow for fractional share purchases, meaning you won't have to put up $1,300 to buy a single share of Priceline Group stock.

In other words, you really don't need to be a millionaire to begin investing in the stock market.

10. Get basic maintenance done to your car
One last suggestion: keep your car in good working order. Understandably $100 isn't going to cover a lot when it comes to car repairs, so you have to be smart with what you choose to get done. If you shop around, chances are you'll be able to get an oil change, an air filter, and a transmission fluid flush all for around $100 total.

Why these three items? While I'm far from being a mechanic I can tell you that replacing an engine or a transmission can be a multi-thousand dollar cost. In fact, Sean Avner, the owner of A Team Transmissions in Columbus Ohio, suggested in an interview last year with Angie's List that the average cost of a rebuilt transmission ranges between $2,800 and $3,800, while a brand-new transmission normally runs anywhere from $4,000 to $8,000. Long story short, take the time to do the little things for your car and it'll likely reward you by not costing you an arm and a leg over the long run.

Do you have a better idea of what to do with the $100 in your wallet? Let's hear it in the comments section below.