A direct payment could make its way into a new relief package after all -- but that's not the whole story. 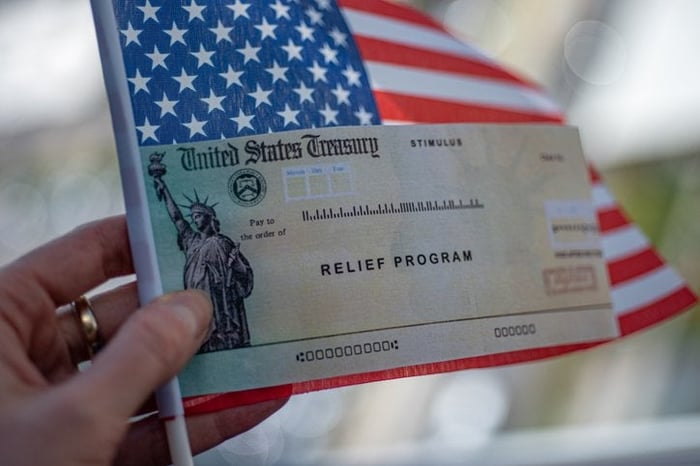 COVID-19 cases are exploding all over the country and hospitals are increasingly overwhelmed. As local restrictions pop up again, it's clear the public needs a hefty dose of relief. Especially given the number of people who have already depleted their savings in an effort to stay afloat. Desperate Americans cling to the hope of having a stimulus bill signed into law before the end of the year. And in that regard, lawmakers are still negotiating.

Last week, a bipartisan proposal came out with a $908 billion price tag attached to it. The package included enhanced federal unemployment benefits of $300 a week, $160 billion in state and local aid, and $288 billion for struggling small businesses. But one thing that was notably absent was a second direct stimulus check.

March's CARES Act included a round of $1,200 stimulus checks that were distributed earlier in the year. Those checks served as a lifeline for the millions of Americans grappling with income loss or unemployment. But it's fair to assume that much of that stimulus money has since been spent. And given the state of the economy and pandemic, Americans need more.

Lawmakers are now working to try to squeeze a second stimulus payment into their latest package. The Trump administration has just put forth a different $916 billion proposal that would include a $600 direct stimulus payment. However, not only is that sum half the size of the initial $1,200 checks, but it also comes at a cost.

On Dec. 8, Treasury Secretary Steven Mnuchin presented this latest iteration of a stimulus bill. It calls for $600 direct payments for individuals and $1,200 payments for couples. But while some stimulus cash is certainly better than none, that's still half the amount Americans were hoping to see based on the CARES Act.

What's even more problematic, however, is that this new proposal also seeks to eliminate the $300 weekly boost to unemployment benefits that so many jobless Americans need. Republican lawmakers made it clear from the start they're looking to keep the cost of a relief package down. But freeing up money for direct stimulus checks by yanking enhanced unemployment benefits is not likely to sit well with Democrats. Democrats have been pushing for more generous relief spending, including enhanced unemployment since the summer.

Will a relief package be signed before the end of the year?

Initially, there was pressure on lawmakers to pass a second stimulus bill ahead of the November presidential election. But that milestone has clearly come and gone. At this point, the big question is whether a relief package will get signed into law before 2020 comes to a close.

An equally important question is: What will that stimulus package actually look like? Americans may be encouraged to see a direct payment (albeit a smaller one) back on the table. But taking away boosted unemployment is not only likely to hurt the jobless, but also stall negotiations again at a time when the public can't afford to wait.