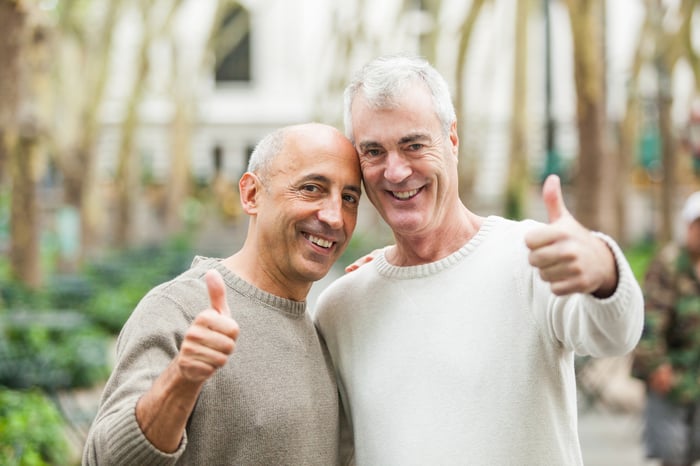 In forming a marital union, two people become something greater than once they were. As some of the petitioners in these cases demonstrate, marriage embodies a love that may endure even past death. It would misunderstand these men and women to say they disrespect the idea of marriage. Their plea is that they do respect it, respect it so deeply that they seek to find its fulfillment for themselves. Their hope is not to be condemned to live in loneliness, excluded from one of civilization's oldest institutions. They ask for equal dignity in the eyes of the law. The Constitution grants them that right.
-- Supreme Court Justice Anthony Kennedy, closing his majority opinion  in the Obergefell v. Hodges case that legalized same-sex marriage in the United States in June 2015

The Obergefell v. Hodges case was based on same-sex couples and surviving spouses who were denied Social Security benefits because they lived in states that didn't recognize their marriages. The decision in their favor not only gave same-sex couples the right to marry across America, but it also gave them access to the same Social Security benefits enjoyed by other married couples in the United States. That's a big, big deal, financially, for many people.

All Americans, gay and straight alike, have long benefited from the Social Security program. Those of us who have paid into the system sufficiently (it only requires the equivalent of about a decade of work in most cases) get to receive retirement benefits when we're older.

What it means for same-sex couples and families

Of course, the earliest one can apply for retirement benefits is age 62, so if you're still in your 20s, 30s, 40s, or 50s, this won't apply to you right away. It might apply to you now, though, if you're young but are widowed. Widows and widowers are able to start collecting as early as age 60 -- or 50, if they are disabled and became disabled before or within seven years of becoming widowed.

The rules are even more generous for some widows or widowers. Per  the SSA: "Your widow or widower who has not remarried can receive survivors benefits at any age if she or he takes care of your child who is under age 16 or is disabled and receives benefits on your record." Surviving children , meanwhile, can collect Social Security benefits when a parent dies -- if they're younger than age 18, up to age 19 and still in elementary or secondary school, or any age if they are disabled and became disabled before age 22. The definition of children even extends to stepchildren, grandchildren, and step grandchildren, in some cases.

The new recognition of same-sex marriages will now make it possible for children to benefit, too.

If you're not married

Those in the LGBTQ (lesbian, gay, bisexual, transgender, and queer) community who are in committed relationships but are not married aren't likely to benefit from the expansion of Social Security benefits. This is significant because many LGBTQ couples may have been together for a long time without marrying -- in most cases because they could not get married.

Some entered into what are being referred to as non-marital legal relationships (NMLRs), such as civil unions or domestic partnerships, but that won't, generally, qualify them for Social Security spousal retirement benefits, divorcee benefits, or survivor benefits. I say "generally" because there are a few cases where some benefits may be available. As of March 2016, the Social Security website was noting:

Social Security is now processing some retirement, surviving spouse and lump-sum death payment claims for same-sex couples in non-marital legal relationships and paying benefits where they are due. We encourage you to apply right away for benefits, even if you aren't sure you are eligible. Applying now will protect you against the loss of any potential benefits.

In general, couples can benefit more from Social Security benefits than single folks do. (Some people even see this as discrimination against singles, as possibilities available to married people are not available to them.) Here are the key benefits those who are or have been in same-sex marriages should know about:

Equality in the eyes of the Social Security Administration is a major development and a financially powerful one for same-sex couples. If you're in such a relationship, be sure to explore all the benefits that you may be entitled to. If you find yourself confused, ask the SSA for answers or seek professional advice.