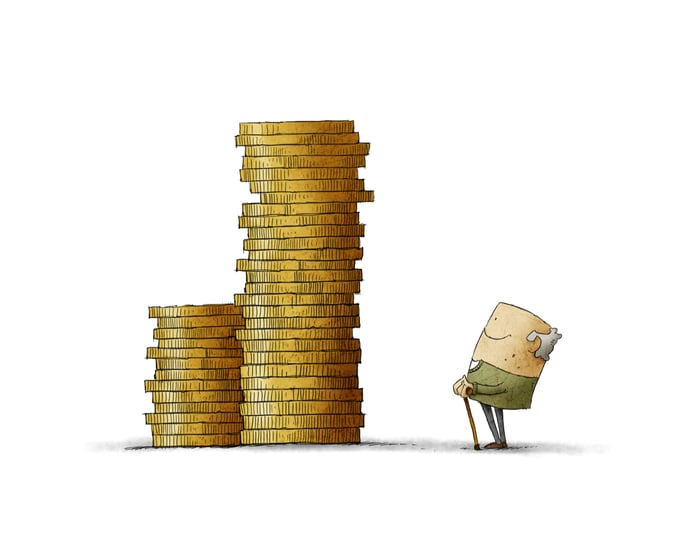 Social Security is a very important program: it provides over half of all retirement income for 53% of married couples. And yet, it's often nowhere near enough to replace the income that retirees had when they were working.

Consider a household that had one working member that averaged $50,000 per year in his/her career. If both regular and spousal benefits are collected starting at age 62 (the most popular age to retire), they would amount to just under $19,000 per year. While that's not chump change, it is a 60% cut in income.

That's why keeping your nest egg invested in retirement is so important. Today, I'm offering up Dividend Aristocrats that investors would do well to consider. These are stocks that have increased their dividend payout for 20 consecutive years. Why is that such an important trait?

If you put $10,000 in an S&P 500 fund, you would have finished the decade with about $21,000. But an investment in dividend aristocrats would have left you with much more, about $27,300! Typically, the greatest assets of holding these stocks is 1. the compounding effect of reinvested dividends, and 2. downside protection offered by the dividend in market swoons (in 2008, the Aristocrats outperformed the market by over 15 percentage points).

AbbVie has a big dividend, and tons of room for growth

In an effort to offer some diversification, each stock comes from a different sector. From the pharmaceutical sector, we have AbbVie (NYSE:ABBV), which was created when the company was spun out of Abbott Labs (NYSE:ABT).

AbbVie's most important drugs include Humira (rheumatoid arthritis), Imbruica (leukemia), and Viekira Pak (hepatitis C). While all three are patent protected, the more critical factor in the company's long-term success is the fact that it has $8 billion in cash on hand and spent over $4 billion on research and development last year to keep its pipeline churning out important drugs.

The stock offers a sizable 3.5% yield. While that's nice, retirees should get even more excited about the fact that the payout has grown by 23% per year since the spinout, and AbbVie only used 48% of its free cash flow on dividends over the past 12 months.

One of the great things about investing in consumer staples is that power of brands. Unlike technology companies, which can be disrupted by new products in the blink of an eye, consumer staples are unlikely to change so quickly.

Colgate-Palmolive (NYSE:CL) owns some of the most powerful brands out there, including its namesake toothpaste and dish soap brands, Speed Stick deodorant, Irish Spring, and Hill's pet food. Because shoppers are familiar with -- and trust -- these products, Colgate has the pricing power to slowly inch prices up. That extra cash drops directly to the company's bottom line.

Right now, Colgate offers a 2.1% dividend yield. It has shown modest growth over the past five years, averaging an 8% bump per year. But perhaps most important, its dividend is very safe, as only 58% of free cash flow was used to pay the dividend last year.

Shares of AT&T will give you a big yield

Finally, we have a stalwart of the telecom industry. AT&T (NYSE:T) owns some of the most valuable communications properties in the world. It merged with DIRECTV last year. According to Statista, AT&T holds a 32% market share for wireless domestic subscribers, and it provides broadband connection for over 15 million U.S. subscribers.

While AT&T offers the biggest yield out of these three companies (4.7%), it also has the smallest prospects for dividend growth. That's because 66% of free cash flow is used to pay its dividend, and over the past five years, dividend hikes have averaged only 2%.

It's important for AT&T to keep cash on hand in case the economy sours. The capital expenditures to maintain AT&T's network aren't cheap, and the company has over $130 billion in long-term debt. That's not unusual for telecoms, but it speaks to the fact that investors need to accept that the payout won't grow substantially in the years to come.

With Treasuries yielding less than they ever have, many retirees are looking for added sources of income. Dividend Aristocrats provide just that. Buying a basket of dividend stocks that include these three will likely help supplement your income in retirement.