The statistic is scary. And higher than you think.

Despite the fact that we finally seem to be recovering from the recession that knocked America on its tail, many of us are still struggling to make ends meet. According to a survey released earlier this year by the Federal Reserve, an estimated 31% of Americans are having trouble keeping up with their basic living expenses.

The situation has gotten so bad, in fact, that close to half of Americans say they don't have enough money on hand to cover a $400 emergency. And while this collective lack of savings boils down to misplaced priorities and poor money management for some of us, for others, it's less so a matter of choice and more so a matter of fact. An estimated 45 million Americans live below the poverty line. That's over 14% of the U.S. population. And if you're among the many Americans who are underemployed, underpaid, and drowning in debt, the idea of saving money might seem so far-fetched it's almost laughable. But whether you're wealthy, poor, or fall someplace in between, you can change your financial picture for the better. 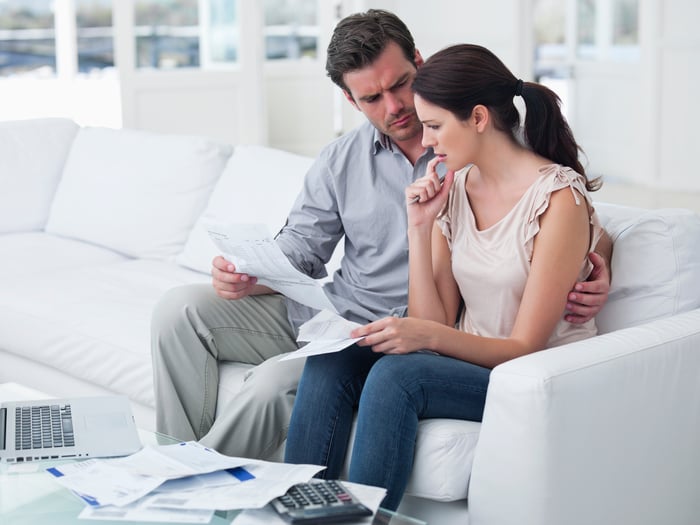 When life's expenses get out of hand

A big reason why so many Americans have trouble keeping up with their bills is that they're spending more than they earn and aren't taking steps to compensate. Though close to one-third of Americans are struggling to pay their bills, only 22% of those surveyed say they've gotten an extra job to generate added income. Of course, not everyone has the ability or opportunity to take on added work. And although some of us are to blame for our financial woes, that's not always the case. Expenses like property damage or medical bills, for example, are often unavoidable, and when they hit an already-struggling household, the results can be downright catastrophic. But while you can't predict the unexpected, you can take steps to establish a financial safety net and work some wiggle room into your budget.

Living below your means

Some of us run into financial trouble because we can't resist the urge to spend every last dollar we earn, but it's a far better practice to live below your means. This applies whether you're making $40,000 a year or $400,000 a year. When you spend your entire salary on living expenses, you leave yourself no wiggle room whatsoever for the unexpected. Imagine, for example, that your cable bill goes up $20 a month without warning. If you don't have any leeway in your budget, you'll be $240 a year in the hole.

Of course, living below your means is a lot easier on $400,000 a year than $40,000. But you can work on reducing your living costs as a lower earner by focusing on one or two major expenses. While small changes like lowering your cellphone plan or skipping your weekly takeout can certainly add up over time, if you're truly living paycheck to paycheck, you're better off making big adjustments, like finding cheaper housing or trading in your car for one with a lower monthly payment.

In fact, let's focus on housing for a second, because for most of us, that's our single largest expense. Roughly half of Americans reportedly have a hard time affording their homes, but even if you can technically swing your rent or mortgage payment, it doesn't mean that's the amount you should be spending.

Let's say you can technically afford to pay $2,000 a month in rent but limit that payment to $1,500 instead. That $500 difference will leave you much less vulnerable should a financial emergency strike. And while shaving $20 off your cellphone bill is certainly better than nothing, it's those big changes that can really alter your financial picture for the better.

Now if you're already paying the bare minimum for housing in your area and don't see any way to lower your costs, it may be time to consider getting a roommate (or two or three) or moving to a more affordable city or neighborhood. Are those scenarios ideal? No. But if your income is already stretched way too thin, it may be your only choice until your professional circumstances change. And who knows? You might find that you're happier residing someplace where rents (and living costs in general) are cheaper across the board and you no longer have to lose sleep over how you're going to pay the bills.

Of course, living below your means isn't the only way to protect yourself in the face of unexpected expenses. You should also make a point of having emergency savings on hand at all times. The fact that almost half of us can't just reach into a savings account and pull out $400 means that the more financially privileged among us just plain aren't doing a good enough job of saving.

Your emergency fund should ideally have enough cash to cover three to six months of living expenses. That said, if you're starting at $0, every little bit counts, so do what you can and aim to ramp up. Not all of us have the luxury of cutting out restaurant meals to shave $200 a month off our living expenses, but if you start small, you can establish a modest cushion over time. Even hitting that $400 mark could help you avoid debt if an unplanned expense arises.

What's wrong with a little debt? Let's say your car breaks down and you need $1,000 to fix it. If you're forced to charge that repair on a credit card and it takes you two years to pay it off at 14% interest, you'll wind up spending over $1,150. And while $150 may not seem like that much money to waste, it can go a long way for someone who's otherwise strapped for cash.

While it's important to live below your means and establish a financial safety net, one final way to get your finances under control is to create a budget -- and stick to it. According to a 2013 Gallup poll, only one-third of Americans maintain household budgets, which means most of us still think we can wing it. But without a budget, you'll have a much harder time tracking your spending. And it's hard to save money when you have no idea where it's going in the first place. Even if you're convinced that you're spending the bare minimum across all living categories, it still helps to break things out and keep tabs on where your money goes. Plus, it'll help you figure out how much money you stand to save by cutting certain key expenses, like housing and transportation.

If you're struggling to keep up with your bills, you may have a number of choices to generate extra cash and lower your expenses. Or, you may have no choice but to make one or two major sacrifices and wait for them to pay off over time. But no matter what steps you take to improve your financial picture, the key is to do something rather than give up hope.