A recent report by Fidelity concluded that the average 65-year-old couple retiring in 2016 will need $260,000 to cover their medical expenses throughout retirement. This is a 6% increase over Fidelity's findings a year ago, and can be attributed to longer life expectancies, rapidly rising prescription drug costs, and higher medical-service utilization levels.

Furthermore, this estimate doesn't include the cost of long-term care insurance, which, according to Fidelity's report, can add another $130,000 to the lifetime tab. This assumes that a retired couple in good health purchases a policy with a maximum $8,000 monthly benefit for three years, with an inflation adjuster of 3% per year.

Another recent report, from HealthView Services, concluded that the lifetime tab for a 65-year-old couple would be $266,589 -- consistent with Fidelity's findings. However, this amount includes only premium expenses and assumes the couple is covered by Medicare parts B and D, as well as a supplemental insurance policy. For total healthcare expenses, including items like dental and vision care, co-pays, and all other out-of-pocket costs, the estimate rises to $394,954. Notably, this doesn't take inflation into account -- these figures are in today's dollars.

Furthermore, these costs are skewed toward the latter years of retirement. In other words, even without accounting for inflation, retirees should expect to spend more on healthcare as they get older.

It could get even worse for future retirees

According to the Centers for Medicare and Medicaid Services, healthcare inflation is expected to average about 6% per year for the next decade, which will put even more of a cost burden on future retirees. As a result, total lifetime healthcare costs in retirement for a 55-year-old couple planning to retire in 10 years would be $463,849 in today's dollars. This is17.4% more than today's retirees can expect to pay, and this doesn't even include the extra 10 years of inflation.

And Social Security will help less and less

The problem is, healthcare costs have been rising faster than inflation and, as I mentioned, are projected to continue doing so. 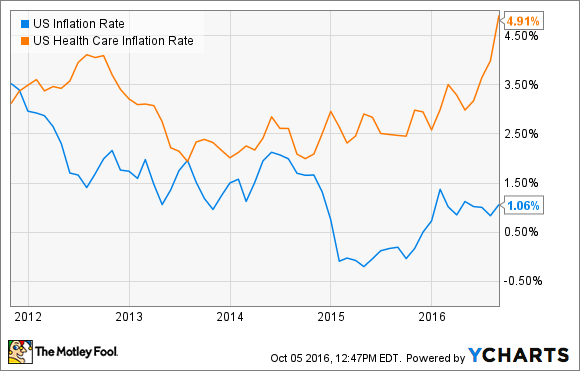 In fact, the HealthView Services report projects that healthcare cost inflation will be triple the cost-of-living adjustment that is given to Social Security beneficiaries for the foreseeable future.

Here's what you can do

Since healthcare costs are likely to increase for future retirees, and income sources like Social Security will help less, it is more important than ever for current and future retirees to plan ahead now. Here are a few suggestions to help get you started.

If you're already retired, consider buying a Medigap insurance plan. These are purchased through private insurers, but the offerings are limited to 10 standard plans. These plans pay some of your healthcare expenses that Medicare doesn't cover. While these plans will cost you an additional monthly premium, they can also limit your out-of-pocket expenses for each year. For example, Medigap Plan K pays 50% of the amount Medicare doesn't cover for certain expenses such as Part B coinsurance and co-payments, Part A deductible, and skilled nursing facility coinsurance, and has a $4,960 out-of-pocket limit.

If you're not already retired, consider taking full advantage of a health savings account (HSA) if you have a qualifying high-deductible health plan. If you qualify, you can contribute up to $3,350 for 2016 ($6,750 for a family HSA), and your money can be invested in mutual funds, similar to a 401(k). These accounts have a triple tax advantage when used for qualifying healthcare expenses: Contributions are tax-deductible, grow tax-deferred, and qualifying withdrawals are tax-free. And, after you're 65, you can withdraw from your HSA for any reason, not just for healthcare, which makes the HSA an excellent place to put retirement savings.

Finally, the best way to save on healthcare costs is to stay as healthy as possible. This may sound obvious, but if you don't exercise regularly, eat a healthy diet, and keep up with preventive care, your healthcare costs in retirement are likely to be much higher. In a very real sense, spending a little time in the gym today can put thousands of dollars in your pocket later on.