Jason Hall, Dan Caplinger, and Brian Stoffel
(tmfvelvethammer)
Author Bio
Born and raised in the Deep South of Georgia, Jason now calls Southern California home. A Fool since 2006, he began contributing to Fool.com in 2012. Trying to invest better? Like learning about companies with great (or really bad) stories? Jason can usually be found there, cutting through the noise and trying to get to the heart of the story. Follow @TMFVelvetHammer

Making sure the income you will count on from your retirement savings is sustainable is one of the most important steps people should take. And one common method that people have used for the past 25 years or so is the "4% rule." However, some question whether the 4% rule is still useful.

We reached out to three of our experts on retirement planning and asked for their latest thoughts on the 4% rule and whether it's still worthy advice. Here's what they had to say. 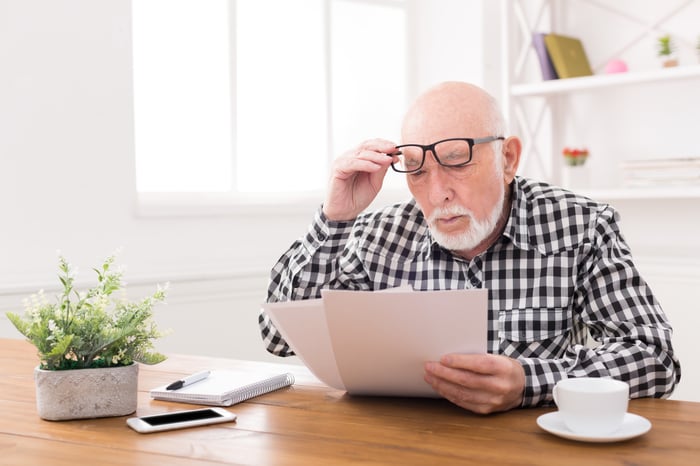 Jason Hall: The basic premise of the 4% rule is thus: In your first year of retirement, withdraw 4% of your retirement savings, and then increase that dollar amount each year thereafter based on inflation. There are two potential reasons the 4% rule may be unworkable for you:

According to recent data, the average 65- to 74-year-old has only about $140,000 saved for retirement. At the 4% rule, that's only $5,600 per year, potentially far less income than many retirees will depend on to supplement Social Security or pensions.

Which brings us to the second point. In retirement, a substantial portion of retirement savings should be in less volatile fixed-income investments, such as government or high-quality corporate bonds. And in the current interest-rate environment, these kinds of bonds often yield less than 3%, meaning that your distributions each year could deplete your retirement savings at too high a rate to make it last the remainder of your life.

But if you've saved up far more than the median retiree, or if you're still years from retirement and making sure you've saved enough, then the 4% rule could certainly work for you. As my colleague Brian discusses in a moment, it can at least help you figure out how much you need to have saved for retirement if you're expecting to use the 4% rule.

It gives a ballpark figure, and that's important

Brian Stoffel: I'll be the first to admit that the 4% rule isn't perfect. There are scenarios where following it strictly could get you in trouble, and those shouldn't be swept under the rug.

However, when we zoom out and look at the much larger picture of how prepared we are for retirement, the size of our nest eggs is the primary area of concern. Younger workers might be shocked to find out that $100,000 will safely provide only $4,000 of income in retirement. That kind of wake-up call is what motivates us to start saving and investing more.

The 4% rule puts the magnitude of retirement savings into perspective.

At the same time, its important to show how a simple strategy of automatic saving and investing can make accumulating a large nest egg very doable. For instance, if you want to have $30,000 of non-Social Security income in retirement, you'll need a $750,000 nest egg. That sounds like a lot -- it may even cause you to despair.

You can do better than the 4% rule

Dan Caplinger: Simple rules of thumb often have problems that make them less than perfect solutions to key issues. The 4% rule does a good job of protecting retirees from a worst-case scenario, but one of its major failings is that it can be far more conservative than necessary in many situations and therefore provides retirees with less income than they could realistically take. Even one of the pioneers behind the rule admitted in subsequent studies that some minor refinements to his models could support withdrawal rates that are closer to 4.5% to 5%. That might not seem like much, but if you want to spend $50,000 per year in retirement, being able to withdraw 5% rather than 4% means only having to save $1 million rather than $1.25 million.

One particular way in which the 4% rule is rigid is in its complete insulation from market performance. The biggest danger to your savings is a bear market early in your retirement years, and the 4% rate is designed to handle particularly unlucky circumstances. However, if you can be flexible with your withdrawals -- taking less money when the markets perform badly -- then it can make your savings last a lot longer. The 4% rule isn't a bad starting point, but it is a bad stopping point if you don't dig any further into what you need to retire comfortably.