In case you haven't heard by now, there's a major student loan crisis brewing, and the average American borrower is graduating with more debt than ever before. In fact, student debt is rising faster than inflation, and it doesn't just affect recent graduates. Even seniors -- the last people you'd expect to be saddled with student debt -- owe over $18 billion in loans. 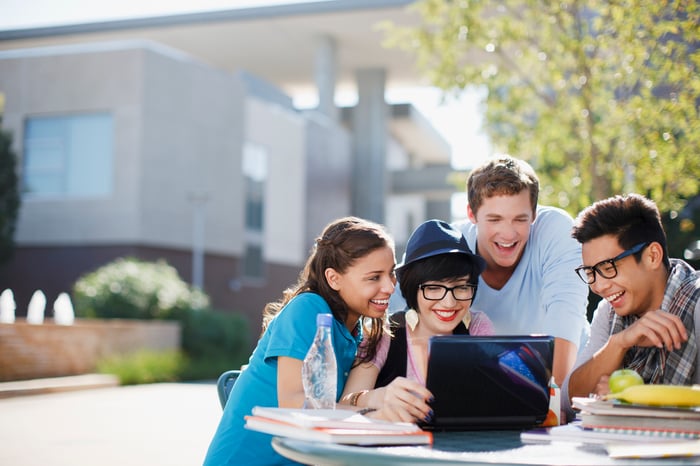 So just how much does the average American owe post-college? Here are some key statistics on student debt, courtesy of Student Loan Hero:

Now to an extent, these numbers aren't shocking given the exorbitant cost of college these days. The College Board estimates that for the 2015-2016 school year, the cost to attend college, including tuition, fees, and room and board where applicable, averaged:

It's no wonder Americans have no choice but to borrow up the wazoo. The problem, however, is that some of us are going overboard. In fact, college loans are the only category of consumer debt that's failed to decrease since the 2008 recession. And if we continue borrowing this way, we're going to have an even bigger problem on our hands.

The dangers of defaulting on student loans

It's one thing to borrow money for college and grumble every time a monthly payment comes due, but many of us are struggling to keep up with those payments. The federal loan default rate is now over 11%, and while it's an improvement from six years ago, when the default rate was close to 15%, it's still far from ideal.

What many borrowers don't realize is that defaulting on student debt comes with serious consequences -- namely, you might get sued for the amount you owe and wind up on the hook not just for your debt, but for the cost of bringing a lawsuit against you. Furthermore, a student loan default will usually remain on your credit report for seven years, but if you fail to make payments on a Perkins loan, it'll scar your credit report even longer. During this time, you may have trouble getting an auto loan, renting an apartment, or even getting a job.

Additionally, anyone who defaults on a student loan is barred from working for a federal agency. And if you already work for a government agency and default on your loans, you could risk suspension or job loss.

Furthermore, the government will often stop at nothing to collect on student debt. If you fail to make payments, the government might go so far as to garnish your wages or seize your tax refund before you can get your hands on it. Plus, unlike other types of debt, student loans aren't automatically dischargeable in bankruptcy. Talk about unforgiving.

But it's not just defaults that borrowers have to worry about. Repaying your loans in full -- which you're legally obligated to do -- could have a serious impact not just on your short-term finances, but also on your retirement. A Morningstar report reveals that no matter your age or income, for every $1 of student debt you accrue, you're likely to decrease your retirement savings by $0.35. So if you finish college $37,000 in debt like the average recent grad, you'll set yourself back almost $13,000 in retirement savings.

Here's another scenario to consider. Let's say you're 22 years old and spend the next 10 years paying $350 a month until you finally knock out your student loans. If you were to spend those 10 years saving $350 a month for retirement instead without contributing another dime to a retirement account past age 32, you'd have over $770,000 by age 65 assuming an 8% average annual return on investment (which is doable with a stock-focused portfolio). The more debt you take on, the greater your chances of having to delay retirement or, worse yet, run out of money in your old age. That's just not a risk worth taking.

Take the less expensive road to a degree

If you don't have the money to pay for college outright, which most of us don't, it's time to explore lower-cost alternatives for getting your degree. At the very least, opt for an in-state school, where you'll save an average of $24,000 a year compared to a private university. Better yet, choose a school that's commutable. While you might miss out on the dorm experience, you'll shave a good $10,000 off your bill each year.

You might also consider starting out at community college and transferring to an in-state public school after two years. This especially makes sense if you're in a non-specialized program and expect to take a lot of core or prerequisite classes early on in your college career. Attending community college over an in-state school could save you a good $8,000 a year.

There's a difference between taking on student debt in pursuit of your degree and getting in way over your head to attend a big-name college that may or may not lead you toward a successful, lucrative career. Sure, there's something to be said about graduating from the college of your dreams, but given the long-term financial sacrifice you might make to get there, you'll need to ask yourself whether the cost is ultimately worth it.