We're told repeatedly how important it is to save independently for retirement, but a lot of us still aren't listening. An estimated 33% of Americans have no money at all saved for retirement, but an even more frightening statistic is the fact that 30% of those 55 and older are in the same boat. And a big reason so many of us aren't saving boils down to Social Security. 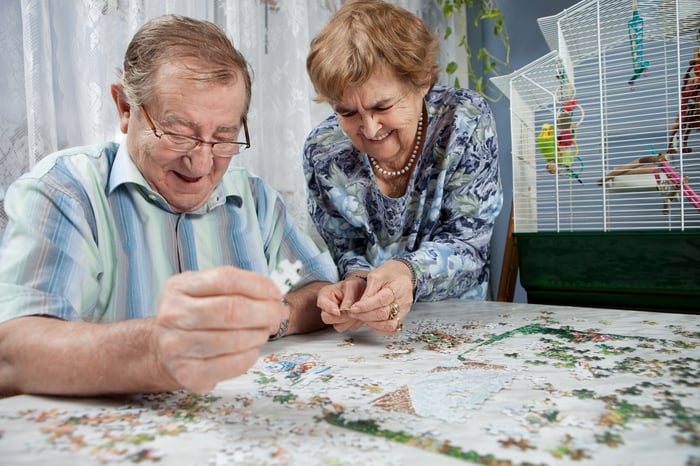 In fact, according to the National Academy of Social Insurance, Social Security is the sole source of income for almost 25% of Americans 65 and older. But while it's true that Social Security helps countless seniors stay afloat financially in retirement, there's a real danger in relying on it too heavily. And if we don't start taking matters into our own hands, a lot of us will risk coming up short when retirement rolls around.

Can you live on Social Security alone?

The problem with banking on Social Security is that your benefits are only designed to replace about 40% of your pre-retirement income. This isn't just an educated estimate; the Social Security Administration even says so itself.

Now you may be expecting your living costs to go down once you retire -- so much so that you'll be able to survive on Social Security alone -- but in reality, that's not likely to happen. For one thing, you're going to have a lot more free time on your hands, which means you might wind up spending extra on leisure and entertainment. But more importantly, you're going to have healthcare to worry about, and that's where so many seniors get thrown for a loop.

According to 2016 data from HealthView Services, a provider of healthcare cost-projection software, the average healthy 65-year-old couple retiring this year can expect to incur $377,000 in medical expenses over the course of retirement. Younger couples have it even worse. The average healthy 55-year-old couple today could spend as much as $466,000 on healthcare expenses throughout retirement, while a 45-year-old couple today in similar health might rack up $592,000 in healthcare costs. And those are the numbers healthy couples are facing. If your health isn't great, your expenses could climb even more.

And as much as you can try to keep your living costs down, there's just no getting around the basics like food, electricity, transportation, and housing. In 2014, the average American spent $934 a month on rent alone. If you're in a similar boat, that means you'd be left with less than $200 a month to cover the rest of your expenses if you were to rely solely on Social Security. And that's just not enough.

If $16,000 a year per person in retirement doesn't sound adequate, then it's time to saving independently while you still have a chance. Even with retirement less than a decade away, there's still time to amass some savings before you stop working for good. Anyone 50 or older can currently contribute up to $24,000 a year to a 401(k) and $6,500 a year to an IRA. If you can't max out those contributions, do what you can. Saving just $250 a month over the course of 10 years will give you an extra $36,000 in retirement if your investments generate a relatively conservative 4% average annual return.

If you're still in your 30s or 40s, you have an even greater opportunity to catch up. Saving $250 a month over the course of 20 years will leave you with $137,000 for retirement, assuming your investments generate an average annual 8% return -- a reasonable assumption for younger investors who are able to get more aggressive.

Now if you're already in your 60s and have yet to start saving, you might consider postponing retirement and working a few extra years to put some money aside. Though it may not be your ideal solution, some studies have shown that working longer could actually lead to a longer life. Another option? Work part-time in retirement to supplement your Social Security benefits.

No matter what you do to generate extra retirement income, don't make the mistake of depending on Social Security alone to fund your golden years. Social Security can and should play a strong role in your retirement budget, but without another source of income, you risk running out of money at a time when you just might need it the most.

Could You Live on $16,000 a Year? Here's Why You Might Have To @themotleyfool #stocks Next Article
Current