Tax season is right around the corner, and before you know it, you'll be filling out your 2016 federal income tax return. In that spirit, here are five interesting facts about personal income, IRS tax brackets, how much the effective tax rates are, and more that you may not be aware of.

Income taxes were illegal until 1913

It may surprise you to learn that income taxes were constitutionally prohibited until 1913 when the 16th Amendment was ratified.

The amendment states: "The Congress shall have power to lay and collect taxes on incomes, from whatever source derived, without apportionment among the several states, and without regard to any census or enumeration."

At first, taxes were low by today's standards. Here are the original 1913 tax brackets (they applied to all taxpayers, single and married) and what they translate to in today's dollars.

It's fair to say that for most Americans, their 1913 marginal tax rate was just 1%.

In 2014, the most recent year for which complete and finalized data is available, approximately 148.6 million personal income tax returns were filed in the U.S. Of these, nearly 36 million of them had no taxable income whatsoever and another 16.1 million had some taxable income, but thanks to some credits and adjustments, ended up owing no income tax.

This translates to 35% of Americans, so when President-elect Donald Trump said that his tax plan would result in no federal income tax liability for half of Americans, that statement wasn't as much of a stretch as it might have seemed.

71% of Americans can't use most tax deductions

What are some of the most valuable tax deductions available to Americans? If you research this topic, you're likely to find deductions such as the mortgage interest and charitable contribution deductions, which can be worth several thousand dollars per year.

However, less than one-third of Americans can actually take advantage of deductions like these. To use most of the available tax deductions, you need to itemize on your tax return, as opposed to taking the standard deduction. And only 29% of Americans itemize. In other words, millions of homeowners and charitable givers don't get any tax benefit for these expenses.

Having said that, there are a select few deductions that all Americans can use, known as adjustments to income. Some of the most common are the deductions for traditional IRA contributions, student loan interest, moving expenses, and self-employed health insurance premiums.

With the push by the incoming Republican administration to lower taxes, you may think that ours are excessively high. However, this is not the case.

For one thing, we are one of the least-taxed developed countries in the world, among which we rank 26th out of 28. And you may be surprised to learn that the current tax brackets are quite low when compared with some of our former tax rates. For example, consider the U.S. tax brackets from 1981. Not only were there 17 tax brackets at that time and different rates for each filing status, but the highest rate was a staggering 70% and the income thresholds weren't even that high. Any income above $108,300 for singles or $215,400 for married couples was taxed at that rate, the equivalent of about $280,000 and $572,800 in today's dollars. 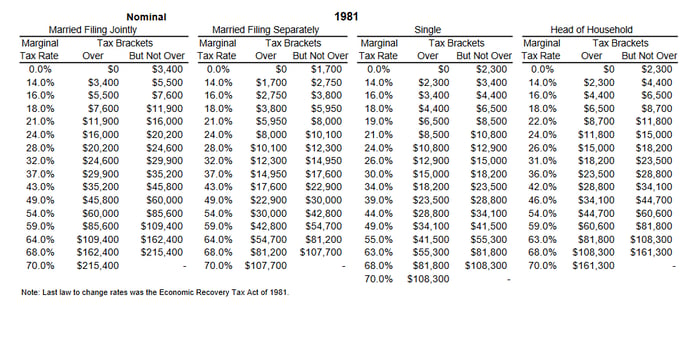 The super-rich pay about 26% of their income

There has been a lot of discussion, particularly from the Democratic side of the political spectrum, that suggests the rich need to pay more income taxes. In fact, even Warren Buffett has pushed for a rule that would require all millionaires to pay an effective tax rate of at least 30% of their income.

The actual numbers aren't too far off from that level. Americans who earned between $1 million and $10 million in 2014 paid an effective tax rate of 29% on average. Granted, this is an average, so it's fair to assume that some people in this income range paid significantly less, but as a whole, this group isn't too far off from being in compliance with the so-called "Buffett rule."

However, the highest-earning Americans, those with income above $10 million, pay a lower effective tax rate of 26.1%. And some pay much less. Warren Buffett himself only paid an effective tax rate of 16% last year and based on information he recently released, he didn't even take advantage of all deductions to which he was entitled.

The average person in this top income bracket had adjusted gross income of $30.2 million in 2014, most of which is subject to tax at the top rate of 39.6%, plus there is an additional 3.8% surtax assessed on certain investment income. Based on this, an effective rate of 26.1% translates to about $4 million in deductions for the average member of this group. Whether 26.1% is "enough" or not is a topic for political debate that is beyond the scope of this article. However, when we hear that the super-rich take advantage of the currently available tax deductions, it is fair to say that this is indeed the case.