Starting off on the right foot in your 20s can set the stage for a lifetime of financial success.

Many 20-somethings don't think about retirement, partly because it's so far away, and partly because they have so many other expenses to contend with (think raging student debt). But ignoring your retirement savings in your 20s means missing out on key opportunities to grow your nest egg into something huge. If your goal is to eventually retire on time and maintain a reasonably comfortable lifestyle, here's what you need to do in order to get there. 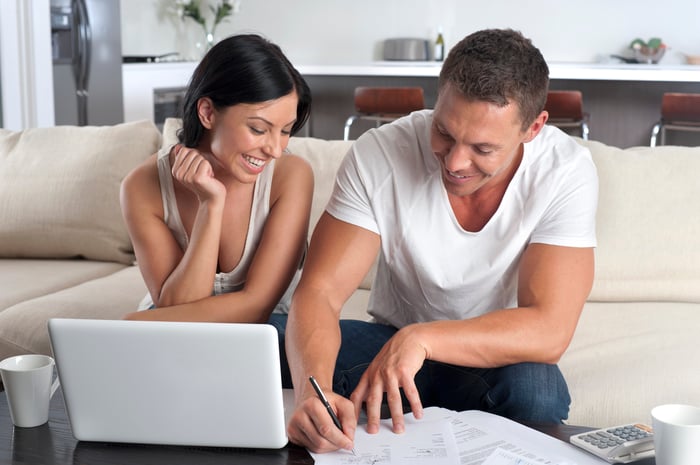 Before we can even begin to talk about retirement, we need to address the here and now. According to a 2016 study by GoBankingRates, 31% of those between 18 and 24 have absolutely nothing in savings, while 41% have less than $1,000 in their accounts. You can't start saving for the future if you don't have enough money on hand to cover an emergency in the near term, so if your savings account is empty or your balance is cringe-worthy, you'll need to focus on building up your immediate reserves. The average worker should aim to have three to six months' worth of living expenses in an accessible savings account. The sooner you hit that target, the sooner you can start working on retirement.

For now, start by creating a budget and making sure there's adequate room for savings in there. If not, you'll need to cut corners -- immediately. You might also consider taking on a side job to help boost your savings efforts. Is working every other weekend how you want to spend your time? Probably not, but when you're young and have the ability to push yourself, it pays to seize the opportunity.

While you can save for retirement and pay off student debt simultaneously, high-interest debt (such as that of the credit card variety) can really wreck your finances if you don't get ahead of it. If you owe money on a card charging 20% interest, a mere $2,000 balance could wind up costing you almost $2,700 in total if you carry it for three years. That's why you're actually better off knocking out high-interest debt before you start using whatever extra money you have to build your nest egg.

Even student debt can come back to bite you if you're not careful. While federal loans tend to come with reasonable interest rates, many students resort to borrowing from private lenders, whose rates are often double that of federal loans. If you're dealing with the latter, you're probably better off paying down your debt than sticking excess cash into a 401(k).

Once you've established your emergency fund and paid off your debt, your next move should be to open up a retirement account -- something that most 20-somethings don't currently do. According to Moneyunder30.com, in 2015, only 46% of Americans in their twenties contributed to a retirement account. If your employer offers a 401(k), sign up and arrange for at least 10% of your paycheck (or as much as you can swing) to filter in automatically. If participating in a 401(k) isn't an option, visit your local financial institution and open an IRA.

In fact, if you're going to go the IRA route, consider opening up a Roth. The key difference between a traditional IRA and a Roth is that with the former, the money you contribute goes in on a pre-tax basis, which means you'll lower your taxes up front. But when the time comes to take withdrawals later on, you'll get hit with taxes as a retiree. The same holds true for a 401(k). Roth IRAs, however, are funded with after-tax dollars, so you won't get a tax break for contributing initially, but once retirement rolls around, your withdrawals will be tax-free. Since there are income limits for funding a Roth, your twenties are a great time to take advantage because you'll probably earn more money as you progress in your career, at which point contributing to a Roth may not be an option.

4. Ramp up your contributions

While saving any amount in a retirement account is better than saving nothing at all, you should always aim to increase your contributions. The reason? The more money you put in early on, the more you can benefit from compounding over time.

Unfortunately, most 20-somethings who do save for retirement don't contribute all that much. It's estimated that the average saver under 25 has an IRA balance of just over $13,000. Surprisingly, the average saver between the ages of 25 and 29 has roughly $12,500, despite those extra years in the workforce.

But watch what happens if you hold off on saving until your thirties. That same $10,000 investment would turn into just $100,000 if you only have 30 years to grow your savings instead of 40. Wait till age 40 to hit that $10,000 mark, and you'd be looking at just $68,000 at age 65. Missing out on savings opportunities in your twenties is one of the worst mistakes you could make, so do what it takes to keep adding money to your 401(k) or IRA, whether it's putting in your whole bonus or saving your entire raise year after year.

We just saw how $10,000 can turn into $217,000 thanks to the beauty of compounding. But to generate that sort of return, you'll need to be prepared to invest aggressively. According to a Bankrate study, only 18% of savers between the ages of 18 and 25 invest in stocks. If you want to give your money the greatest chance to work for you, you'll need to embrace the stock market in all of its potentially explosive glory. And you don't need to sit there analyzing individual stocks to get a piece of the action. You can invest your savings in index funds, which mirror the market and don't require nearly as much research.

If you're still not convinced that stocks are the way to go, this ought to change your mind: That 8% return that caused $10,000 to magically morph into $217,000 over 40 years is actually slightly below the stock market's historical average. On the other hand, if you were to put that $10,000 into safer investments generating an average annual 4% return, in 40 years, you'd have just $48,000 -- less than a quarter of what a stock-heavy portfolio would have given you. While the stock market might scare you a little, remember that you stand a good chance of coming out ahead when you're investing for the long haul.

Your twenties are a great time to take control of your finances and set yourself up for financial success in the future. The sooner you start saving for retirement, the greater your chances of amassing a sizable nest egg that your 65-year-old self will no doubt appreciate.