Thinking about moving in time for retirement? Though you've probably heard that retirees have a tendency to flock to warmer climates (hello, Florida) in droves, the trend is actually less popular than you may have been led to believe. In 2014, only 5% of seniors made the decision to move, marking a return to pre-recession levels. And while there are emotional and logistical factors that go into the decision (think proximity to family, climate, and entertainment options), I'm not here to talk about any of those.

I'm here to discuss the financial aspects of moving, and what you might stand to gain or lose by relocating before you retire. 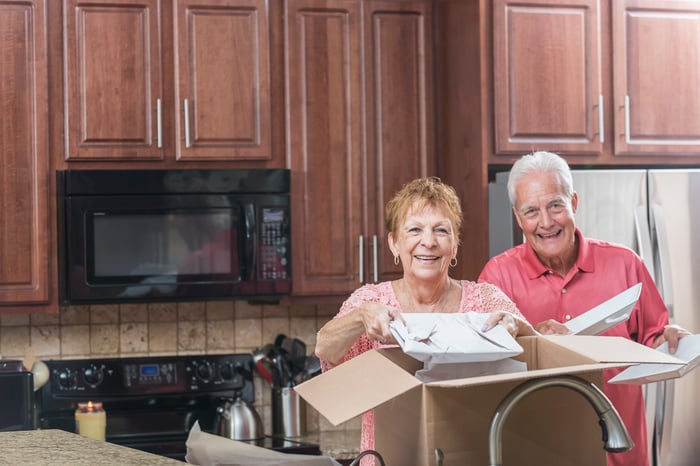 So let's review the downside of moving. First, it costs money. Even if you don't have a home to sell, you'll still need to pay to transport your belongings to wherever it is you wind up. And if you are selling a home, you might face higher costs than you expected.

First, there's the realtor fee, which can easily equate to 5% or more of your home's sale price. Then there are capital gains taxes -- most homeowners don't wind up paying them, but if you stand to make more than a $250,000 profit on your home as a single filer or $500,000 as a couple filing jointly, then prepare to give the IRS its share of your proceeds.

There are also real estate transfer taxes, which vary based on where you live but could reach up to 4% of your home's value. Finally, if your home is on the older side, then it may not be up to code, which could impede your ability to sell it. You may need to put a fair amount of work into your property to address electrical and structural issues, and that's money you're unlikely to recoup in your sale price.

Of course, this isn't to say that you shouldn't move before you retire because you'll face some additional costs. Just get a realistic idea of the costs you'll incur as you contemplate the decision.

To sell or not to sell?

While selling a home can be a complicated and expensive process, it does have its benefits -- especially if you're looking at downsizing or going from owning to renting. While it's true that there are several tax benefits to owning a home -- the largest one being the mortgage interest deduction for most homeowners -- by the time retirement rolls around, there's a good chance you'll have paid off your mortgage, in which case you won't get to capitalize on that tax break in your senior years.

Furthermore, downsizing your property could help shave thousands of dollars off your annual maintenance costs. The average homeowner's yearly maintenance and repair costs typically amount to anywhere from 1% to 4% of his or her property's value, but if your home is on the older side, then you could easily hit the high end of that range. So if you have a home worth $500,000, then you might spend as much as $20,000 a year on upkeep alone.

Then there are property taxes to worry about. While you may be used to paying them, you can never get too comfortable with your current rate. Property taxes have historically proven to rise over time, even during periods when home values declined. Back in 2000, U.S. homeowners paid a collective $247 billion in real estate taxes, but by 2010, that figure jumped to $476 billion despite the fact that the housing market hadn't yet recovered from its notorious bust a couple of years prior. If you sell your home and rent instead, you won't have to worry about maintenance or property taxes.

All that said, while unloading your home in favor of a rental could work out in your favor, there's also an upside to hanging onto it. First, even though you'll lose out on the mortgage interest deduction if your home is paid off, you won't have to make a mortgage payment in the first place, and that can reduce your housing costs tremendously. Additionally, though property taxes do have a way of going up, so does rent -- and while you can write off those taxes, you can't write off a rent increase.

Finally, if your home is paid off, it can serve as a source of equity if you need to borrow money in retirement. You can use your property to secure a home equity line of credit, and if you find yourself in a really desperate situation, you can even look into a reverse mortgage.

Of course, many seniors who own homes find that they no longer need as much space once their children are grown. If that's the case, selling your place and buying a smaller, less expensive one might offer the best of both worlds -- the opportunity to minimize your maintenance costs while retaining the benefits of owning a mortgage-free home.

If you are inclined to pick up and move for retirement, you'll need to decide where to go. Ideally, you'll want to go someplace where the cost of living is relatively affordable. If you're planning to buy a home as part of your move, then you'll especially need to pay attention to property taxes. You can consult this list to see which states have the highest and lowest rates. Keep in mind, however, that it's possible for a state to have high property taxes but low property values. Remember: Your tax rate is simply the amount you'll pay based on how much your home is worth. A $200,000 property with a 2% tax rate will cost you less money each year than a $600,000 home with a 1% tax rate.

Another thing to consider is the extent to which various states charge income tax. While you might initially be drawn to a state that won't tax your retirement income, there are other factors, like overall cost of living, to take into account as well.

Finally, you should know that there are 13 states that tax Social Security benefits to varying extents:

While paying taxes on your benefits isn't ideal, don't rule out these states based on that fact alone. West Virginia, for example, is actually fairly retiree-friendly despite its Social Security tax, because it doesn't cost a lot of money to live there.

Keeping your housing costs as low as reasonably possible is a good way to stretch your limited retirement income. If you're contemplating a move before retirement, your best bet is to do your research, crunch some numbers, and see what scenario makes the most sense for you.

Should You Move Before You Retire? @themotleyfool #stocks Next Article
Current