When it comes to delinquent tax payments, the Internal Revenue Service doesn't tend to just sit back and let things go. Rather, it aims to go after its money, using whatever tools and legal options it has at its disposal.

If you owe back taxes to the IRS, you might be tempted to enlist the help of one of the many tax settlement companies out there that promise to settle your debt. But while reducing your tax bill may seem appealing, the likelihood of these firms negotiating a successful settlement agreement is fairly low. And in some cases, the tax settlement companies you see advertising are nothing but outright scams. 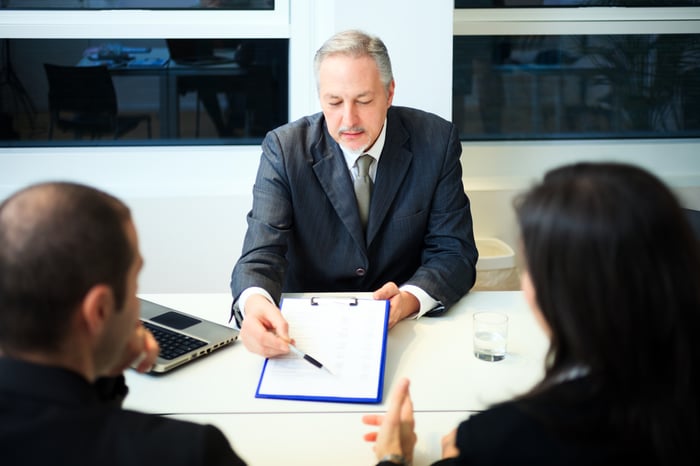 Will the IRS settle your tax debt?

The IRS has one goal when dealing with unpaid taxes: to get its money. As such, it's pretty rare for the agency to agree to a reduction in the total amount a taxpayer owes.

Of course, there are always exceptions. Under specific circumstances, the IRS might agree to an offer in compromise (OIC) that settles your taxes if:

In other words, if you're near death or can prove that you have no assets and zero realistic ability to repay your debt now or in the future, then the IRS might let you off the hook, at least to an extent. But barring the utmost extremes, if you owe the IRS money, often the best you can hope for is an extension to repay what you owe.

That said, there are plenty of tax settlement firms that are nothing but giant scams. What these firms will do is charge you an up-front fee for their services and then either disappear, or claim that they're working to resolve your tax issues when they're actually in no way qualified to do any such thing.

So how can you, as a consumer, tell the difference? Tricky as it may be, you can protect yourself by looking out for the following red flags:

Avoiding a tax scam is similar to avoiding an investment scam. There's no such thing as a risk-free investment, so if someone comes to you and guarantees a whopping return with no downside, you can bet it's a con. Similarly, anytime a tax settlement company lures you in with promises it's in no position to keep, take it as a sign that you ought to run the other way.

One thing to keep in mind is that some tax settlement firms may require an initial deposit before taking your case. While this might seem like a red flag, that's not always the case. As long as you're dealing with a licensed firm with good credentials (such as having established attorneys and accountants on staff) and no grand promises are being made, don't necessarily rule a company out because you need to put down a deposit. That said, if the idea of working with a tax settlement firm makes you wary, you may want to hire a lawyer instead.

Either way, if you're hoping to settle your debt with the IRS, go into the process with limited expectations and don't be shocked if your balance ultimately isn't reduced. There's a very good chance you'll wind up owing whatever amount you failed to pay in the first place, so if your tax settlement firm or lawyer negotiates a reasonable payment plan on your behalf, be thankful for that leeway.

Are Tax Settlements a Scam? @themotleyfool #stocks Next Article
Current