With college costs rising faster than inflation, more and more parents are actively saving to help cover those expenses. And while 529 plans have traditionally been promoted as the go-to college savings vehicle, there's a lesser-known alternative it might pay to explore: the Roth IRA. 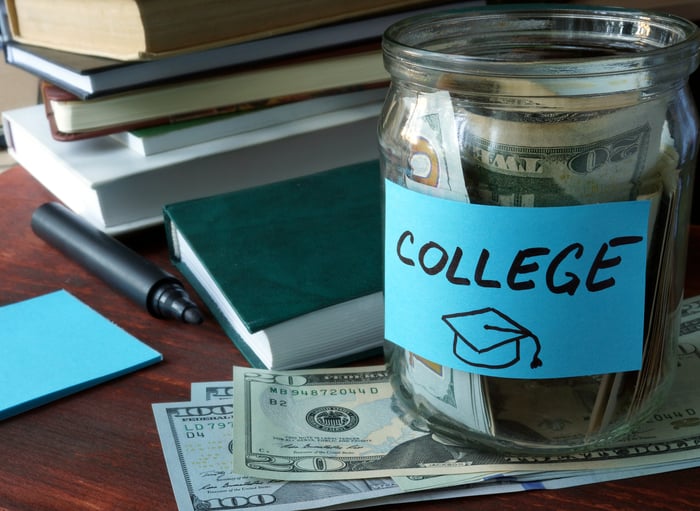 Roth IRAs and 529 plans are similar in that both are funded with after-tax dollars and allow for tax-deferred growth on your investments. Furthermore, qualified withdrawals from both a Roth and a 529 are taken tax-free.

Many parents use 529s to save for their kids' college expenses, and while that may not be a bad way to go, these plans come with one major drawback: If you withdraw funds for non-college purposes, you'll pay a 10% penalty on your earnings. And while overfunding a 529 is perhaps a good problem to have, if it happens to you, you're basically stuck paying the penalty on any leftover funds that didn't go toward approved education expenses.

Roth IRAs take the issue of overfunding out of the equation. If you open a Roth IRA with the goal of saving for college and don't deplete your balance as expected, then you can leave that money where it is and save it for retirement. In fact, unlike traditional retirement savings accounts, you don't even have to take withdrawals from your Roth once you reach a certain age; you can let that money sit and grow indefinitely.

But Roth IRAs offer even more flexibility than that. Because Roth accounts are funded with after-tax dollars, you can withdraw your principal contributions at any time without penalty. With traditional retirement accounts, you'll incur a 10% early withdrawal penalty on any distributions you make before age 59-1/2. And while you could be penalized for withdrawing the earnings portion of your Roth early, this penalty doesn't apply if you use that money for higher education. In other words, Roth IRAs really do offer the best of both worlds.

Furthermore, while 529 plans are considered assets on the Free Application for Federal Student Aid (FAFSA), Roth IRAs don't count the same way, at least not at first. If you save via a Roth, it won't impact your child's eligibility for financial aid initially, but be aware that a withdrawal one year might affect financial aid eligibility the following year.

Though the Roth IRA can be a valuable college savings tool, it does have its limitations. First, not everyone is eligible for a Roth. If you earn more than $133,000 this year as a single tax filer or $196,000 as a married couple filing jointly, you won't be allowed to contribute. You can, however, get around these limits via a backdoor IRA, which lets you convert a traditional IRA into the Roth variety.

Let's say you're 40 and want to save for college via a Roth IRA over the next 10 years. Even if you were to contribute $5,500 a year and snag an average annual (fairly aggressive) 7% return on your investments, you'd only have $76,000 at the end of that savings window. Now that might seem like a lot of money, but consider that sum in the grand scheme of what college costs these days.

While $76,000 is certainly a respectable sum, it's not even enough to cover the cost of a public four-year in-state school for a single student. That's why you should aim to max out your Roth IRA contribution each year but also consider funding a 529 separately. Because 529 plans don't impose an annual contribution limit, you can sock away as much money as you can afford to part with to reach your college savings goals.

Roth IRAs are a great way to save for college and retirement, both independently and simultaneously. You can even visit our IRA center for more information or to get some help in opening one.