Millions of Americans rely on Social Security to pay their bills in retirement. But despite a slight universal increase in benefits this year, countless seniors who depend on those payments will continue to feel cash-strapped as the new year progresses. Currently, the average American retiree receives $1,360 a month in Social Security benefits, which is only $5 higher than last year's average. Worse yet, most seniors won't even get their hands on that extra $5 because their raise will go directly toward their Medicare Part B premiums.

If you're counting on Social Security to stay afloat financially in retirement, you should know that your monthly benefits check probably won't be enough to cover even your basic living costs. And if you don't save independently, you could be headed for trouble. 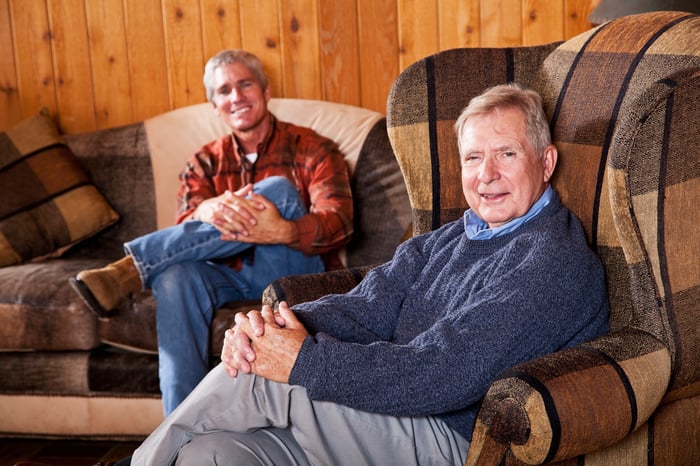 Many seniors are surprised at what they end up spending once they stop working. In fact, here's what Americans aged 65 to 74 spent each month, on average, on a number of key living costs back in 2014:

Keep in mind that these figures represent household spending, not individual spending -- which means that if you have two people collecting Social Security payments, then that's potentially double the income to help cover those costs. But even if we were to assume that the average household gets to collect twice the individual monthly benefit of $1,360 for a total of $2,720, that's still not enough to cover the four essential costs listed above. And while certain expenses like entertainment may be negotiable in retirement, housing, healthcare, food, and transportation are not.

Furthermore, it should be noted that while some expenses frequently go down once people stop working (specifically, commuting costs go away and mortgages are often paid off at that point), healthcare is the one expense that tends to increase in retirement. Recent projections estimate that healthy couples who retired last year at age 65 can expect to spend $377,000 in medical costs over the course of retirement. And that's just what the numbers look like for healthy couples; those with medical issues might spend much more.

All of this highlights the problem of banking on Social Security in the absence of independent savings. According to the National Academy of Social Insurance, Social Security serves as the sole source of income for almost 25% of Americans aged 65 and older. It's also an often-bemoaned fact that one out of every three Americans has absolutely nothing saved for retirement, and many of them are part of the 55-and-over set.

The thing to remember about Social Security is that it was never designed to cover retirees' living expenses in their entirety. Those monthly benefits checks will only replace about 40% of the average worker's pre-retirement income, and while most of us don't need to hit that 100% replacement target, we do need a good 70% to 80% of our previous income to cover our senior living costs. Fail to save money on your own, and you'll be faced with a pretty large gap to fill.

If you're among the many Americans who have yet to start saving for the future, there's still time to change your ways. You can start by saving as much as you can in an IRA or 401(k), both of which allow your investments to grow on a tax-deferred basis. Currently, the annual limits for these accounts are $5,500 a year and $18,000 a year, respectively. If you're over 50, you're allowed to make catch-up contributions that bring these respective totals up to $6,500 and $24,000.

Of course, many of us can't go from saving nothing to hitting either limit, but even if you can only set aside $200 a month, it can go a long way over time. In fact, if you were to begin saving $200 per month at age 45 and invest that money at an average annual return of 8%, then you'd have an ending balance of $110,000 by the time you turn 65.

If you don't have much time on your side, your next best bet is to postpone retirement and work a little longer to save more. Another option is to work part-time during retirement to generate income on top of what Social Security pays you.

No matter what steps you take to save independently, don't make the mistake of thinking that Social Security will be enough. While those benefits might do a good job of helping you cover your bills, relying on them in the absence of additional income will mean setting yourself up for disaster.