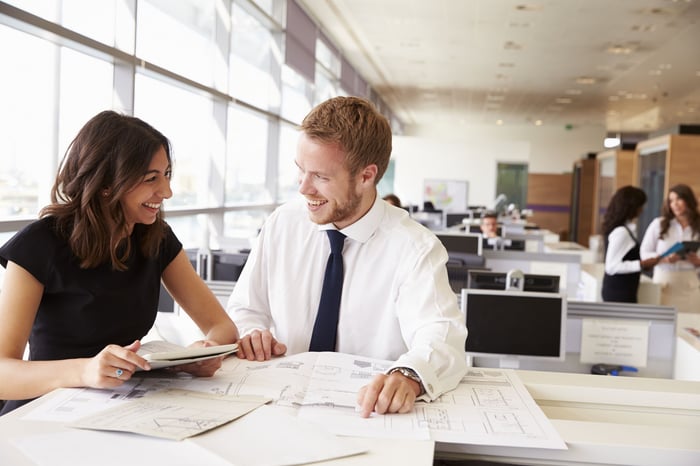 It's not uncommon to find divisions between male and female perspectives on issues in the workplace, especially when it comes to much-discussed issues specific to women -- like women in leadership, maternity leave, and equal pay.

In a new survey of 5,000 working men and women, company review sites InHerSight and kununu teamed up to better understand how workplace perceptions differ by gender. Participants were asked to rate how they feel about their employers' treatment of the genders across 19 factors that carry stakes for both, such as salary satisfaction, learning opportunities and social activities. Of the respondents, 38% were male and 62% were female.

While men showed higher satisfaction in all but one category, paid time off, the most significant finding was just how distant the gap is between each gender's assessment of their company's support of women. And as women move up in seniority, that gap widens.

Here are the key findings.

These findings demonstrate more support for the idea that men and women experience workplaces differently, and they offer added insight into why more hasn't been done to increase gender balance at companies. If men, who move into decision-making management roles in higher numbers than women, are satisfied with their company's policies and programs in support of women, then why would they focus on improving those policies?

Another interesting finding from the survey is how perceptions change over time as men and women move through the ranks in an organization.

Hey, isn't this a meritocracy?

Data from the survey indicates that when women start their careers they feel better about and more satisfied with their access to equal opportunities than men -- but that satisfaction declines steadily as they advance in their careers.

While 43% of early-career women are satisfied with their access to equal opportunities for men and women, only 27% of senior-level women indicated the same.

In contrast, men's satisfaction with equal opportunities for men and women remains much more consistent as they move through the ranks.

"Over time, what women see happening to other women in the organization and what they experience themselves has a clear (and clearly negative) impact on their belief that they have the same opportunities as men," says InHerSight CEO and co-founder Ursula Mead. She continues:

They see women who are as qualified as their male counterparts being passed over for promotions. They see women coming back from maternity leave having their career trajectories impacted by that life event. They see women being left out of important conversations and pushed into support roles rather than elevated into leadership. We started InHerSight because we kept hearing this and it was time to start measuring and understanding it.

I was promised women in leadership

Similarly, women also become increasingly dissatisfied with female representation in top leadership as they progress through their careers.

Forty-two percent of women report being satisfied with their representation in leadership early in their career; however, just 27% are satisfied by the time they reach the senior level.

And while men also become less satisfied with female representation in top leadership as they advance, they're more satisfied than women at each level.

The same is true with management opportunities for women, where men also see fewer chances for women to advance within an organization, though they still rate it higher than women.

The results of this study give voice to a broader issue: Women don't experience as much support in their workplaces as men do.

"The gap between how men perceive gender equality at work vs. how women who actually live it every day feel about it is alarming," says kununu CEO Moritz Kothe. "As a male CEO developing a team and culture, these findings have made me increasingly aware of how we support all of our employees and provide the right foundation to attract and retain the best people."

Through understanding the gap between perceptions on gender equality, corporate America can move toward figuring out how to close it -- not just by making men more aware of the issue, but also by rallying to address it.

"While the conversation around gender equality is louder today than ever before, we clearly still have a long way to go," notes Kothe. "In order for true gender equality to exist, women need to feel like they are on equal footing, and our findings indicate that we're not there yet."

See more from the study here. And join the conversation on improving workplace diversity at InHerSight by rating your employer today!

Shannon Cuthrell is a contributing writer for InHerSight, whose mission is to improve the workplace for women by measuring it. She is a student journalist, published poet, and lifelong writer, on track to dive into her career as a reporter after graduating Appalachian State University in December 2016. For more on women in the workplace, follow InHerSight on Twitter or Facebook.