Please ensure Javascript is enabled for purposes of website accessibility
Log In Help Join The Motley Fool
Free Article Join Over 1 Million Premium Members And Get More In-Depth Stock Guidance and Research
By Maurie Backman - Feb 26, 2017 at 9:18AM

Worried about the future? Here's how to alleviate some of those concerns.

When it comes to retirement, a large number of Americans have reason to fret. Most workers are behind on their savings, and an estimated one-third have yet to save anything at all. If you're stressed about retirement, you have a couple of choices -- you can lie awake at night worrying about the future, or you can take steps to alleviate your concerns and improve your personal picture.

What are we nervous about?

According to a just-released Merrill Lynch study, more than half of younger Americans aged 25 to 39 think a secure retirement is out of reach. And while baby boomers are a bit more optimistic, Americans on a whole feel that they're not prepared financially for what lies ahead. Furthermore, workers of all ages are saddled with these three major retirement fears:

But though these are unquestionably valid concerns, by taking active steps to address them, you'll be less likely to see these fears realized down the line. 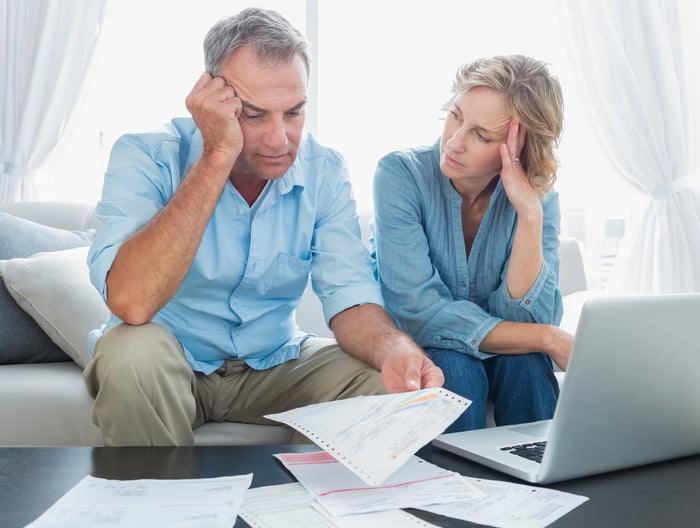 Prepare for healthcare costs to rise

Healthcare is the one expense that's likely to increase for most retirees. Recent projections tell us that the average healthy couples can expect to spend $377,000 in medical costs over the course of retirement. Yikes. But while that is a lot of money, it's also a figure you can work with and start saving for.

Now most workers don't have the means to max out a 401(k) plan or even an IRA entirely. (The current limits for workers under 50 are $18,000 and $5,500 respectively.) But if you can save as little as $300 a month and invest that money wisely, you stand a good chance at accumulating enough to cover your healthcare costs when you're older. The key, however, is to start early enough to give your money time to grow.

The following table shows how much money you stand to accumulate if you begin saving $300 a month at various ages:

As you can see, if you give yourself 40 years to amass a nest egg, even with just a $300 monthly contribution, you'll come out with more than enough money to cover your healthcare costs and then some. (Keep in mind that the $377,000 figure is per couple, so if you're a dual-working household and you each save $300 a month for retirement, you'll be even further ahead.) On the other hand, waiting until your 40s to save limits your growth opportunity.

With interest rates at an all-time low, inflation is a major concern for those who stick to a relatively conservative investment strategy. The average annual inflation rate is 3.22%, and based on present rates, the interest you'll make from savings accounts, money markets, bonds, and the like won't suffice in keeping up with the growing cost of living.

Retirees are particularly vulnerable in this regard. Those who have independent financial resources available at all tend to mostly hold bonds and other such low-yielding investments. In fact, data from the Senior Citizens League shows that older Americans, many of whom rely heavily on Social Security, have lost 23% of their buying power since 2000. But if you're years away from retirement and you invest your money aggressively enough, you stand a greater chance at keeping up with or, better yet, beating inflation and maintaining a better quality of life as a result.

The following table shows much you stand to amass based on a range of investment strategies:

Now if you're looking for that 8% return, you'll need to be prepared to load up your portfolio with stocks, whether it's individual securities or index funds. And while stocks are no doubt riskier than bonds, if you're looking at a 40-year investment horizon, as is the case in our example above, you have plenty of time to ride out the market's ups and downs. Furthermore, holding some stocks in your portfolio during retirement is a good way to hedge against inflation and even generate income, provided your investments pay dividends.

Rethink your goals and priorities

Not having enough money to do the things you enjoy is a legitimate concern, especially at a point in your life when you'll have a ton of free time on your hands. But there are a couple of simple fixes you can employ. The first is to save more during your working years to fund your leisure spending in retirement. The second is to reevaluate what makes you happy both now and in the future. If you train yourself to live below your means and learn to be content with less, you'll get much more out of whatever limited retirement income you have. And if you're willing to get creative, you may come to find that retirement can be a rewarding period in your life even if you can't swing those luxury cruises and nights at the theater.

Most of us face a fair amount of uncertainty when it comes to retirement. But while you can't predict the future, you can do your best to lessen your financial fears by saving consistently, investing prudently, educating yourself about the costs seniors typically face, and reassessing your priorities. The more active a role you take in planning for the future, the less energy you'll expend worrying about it.