Though you may have the option to take out a 401(k) loan, it's not necessarily a good idea. Here's why.

Sometimes, even the most responsible savers run into hard times. If you're strapped for cash or need money to fund a large purchase, you may be tempted to borrow from your 401(k) plan.

The good news is that many 401(k) plans come with loan provisions. And in many cases, it's easier to qualify for a 401(k) loan than a loan from a bank. But taking a loan from your 401(k) has its consequences. If you fail to pay back the money as per your plan's rules, you could face a stiff penalty. But there's an even bigger reason to avoid taking a 401(k) loan: If you remove that money from your account instead of putting it to work, you could wind up compromising your financial future. 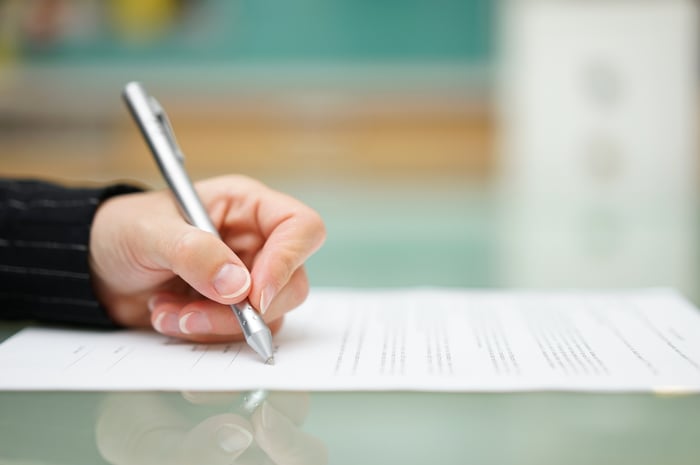 First, let's get one thing straight: Though many plans do allow you to borrow money from your balance, not every plan does, so you may not have the option in the first place. Even if you are allowed to borrow from your 401(k), you'll still be required to pay interest on that loan (though you'll technically be paying it to yourself). Usually, you can borrow up to the lesser of $50,000 or 50% of what you have vested in the plan, though some plans allow you to borrow $10,000 no matter what, provided you have it in your account. Certain plans even impose borrowing minimums, so you might end up taking out more money than you actually need.

Furthermore, when you borrow money from a 401(k), you must repay your loan within five years, though some plans offer a longer repayment period if you're borrowing money to purchase a primary residence. Additionally, you'll generally need to repay your loan via paycheck deductions. Now on the plus side, because those payments will be automatic, you're less likely to default on your loan. On the other hand, if you borrow money because you run into cash flow problems, bringing home an even lower paycheck could further exacerbate the issue.

How much do you really stand to lose?

While borrowing from a 401(k) might seem like an easy solution to a financial predicament you're facing, you should be aware that doing so could set you back big time in the long run. Remember, the purpose of a 401(k) is to provide income in retirement, and the major benefit of 401(k) plans is that they allow your money to grow on a tax-deferred basis. This means that you don't pay taxes on your investment gains along the way, thus maximizing the power of compounding.

The problem with removing money from a 401(k), even for a limited period of time, is that you lose out on growth opportunities for as long as that money is out of your account. Let's say you take out a $25,000 loan from a plan whose investments typically generate an average annual 8% return (which is just below the stock market's average). Had that money stayed put, it could've turned into almost $37,000, which means you're losing out on a good $12,000 of earnings.

Furthermore, if you're unable to repay your loan in time, you'll face a 10% early withdrawal penalty on the amount you borrow. In the case of a $25,000 loan, you'd risk losing up to $2,500 -- not exactly pocket change. And while 401(k) loans generally have a reasonable repayment period, there's an exception to this rule, and it applies if you leave or lose your job. When this happens, you'll often have just 90 days to repay your balance, and if you don't, you could face that 10% penalty.

One final thing to consider is that many 401(k) plans don't allow you to make new contributions until you've paid off your loan. This could further hurt your savings, as you'd be losing out on more compounding opportunities.

While borrowing from a 401(k) makes sense in some situations, it's generally not a good idea. If you do decide to take out a 401(k) loan, be sure to understand the rules and repayment terms before borrowing that money. Failing to comply with the terms of your borrowing agreement could spell major trouble and put your retirement at even greater risk.