Nobody enjoys filing taxes, but a considerable number of Americans are most certainly putting them off this year. According to a recent IRS analysis, more than 5.5 million fewer Americans have filed tax returns this year than they did at the same point last year. In fact, the number of returns received this year has gone from 66.7 million down to 61 million, representing an 8.5% drop. And while some of the decline might boil down to good old procrastination, there may be another reason at play.

Though tax filers have until April 18 this year to get their returns in on time, many opt to file early in order to snag their refunds sooner. But a large percentage of Americans -- namely, lower earners -- may be less motivated to file early this year, and it's all because of the PATH Act. Passed in late 2015, the purpose of the PATH Act is to help the IRS combat tax fraud. 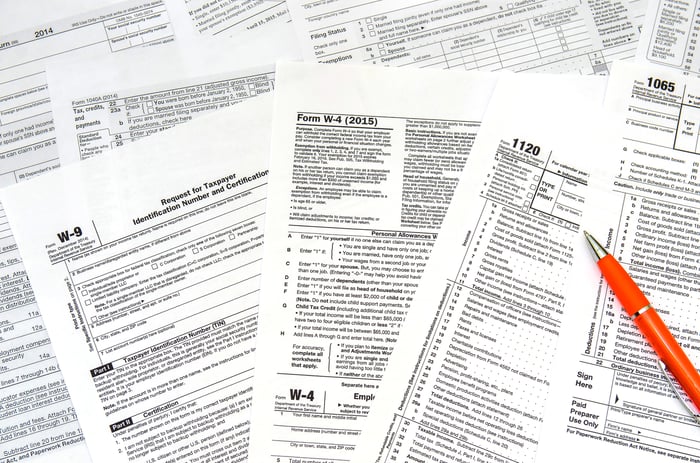 Specifically, the act focuses on two credits that affect low-income taxpayers: the Earned Income Tax Credit (EITC) and the Additional Child Tax Credit. The reason? Unlike most tax credits, the EITC and Additional Child Tax Credit are refundable, which means that if either one reduces your tax liability to below $0, you'll get a check for the difference. As such, these two credits in particular have been popular targets for fraud.

To allow the IRS to fight back, the PATH Act specified that the IRS could not issue refunds to taxpayers who claim either the EITC or Additional Child Tax Credit prior to Feb. 15. Furthermore, this year is the first in which this provision actually applies. As such, millions of taxpayers who typically file early may have seen no point in getting their returns in ahead of the deadline if their refunds were bound to be delayed anyway.

What tax filers don't know could cost them

Another reason why so many Americans aren't filing returns could boil down to lack of knowledge. A recent NerdWallet survey found that most Americans are sorely misinformed about taxes. In fact, many tax filers aren't aware that it pays to file a return even if they don't have income to report.

Remember those two tax credits we talked about earlier? The EITC in particular can be extremely lucrative for low-income earners, and it's possible to qualify even if you don't have children. Yet only four out of every five people who qualify for the EITC actually wind up claiming it. In fact, it's estimated that as many as 7 million people will lose out on the credit, which could be worth up to $6,318 depending on your income and number of qualifying children in your household. Even if you don't owe taxes, the EITC could end up paying you, so you could wind up missing out big time by not filing a return.

Though preparing a tax return can be a touch time-consuming, if you're a low enough earner, you can file one without spending a dime. The IRS has a Free File service available to taxpayers who earn less than $64,000 a year, so if you're willing to make the effort, you might see some cash back this year. And since we're past the Feb 15 timeframe for withholding refunds under the PATH Act, the sooner you file, the sooner you might get that much-needed money. In fact, the IRS typically process electronically filed returns in three weeks or less, so if you file immediately, you might still see your refund sometime in March.

Finally, if you've been putting off your tax return but have every intention of filing one, don't wait until the last minute to get moving. If it turns out you owe money on your taxes, you'll have less time to come up with that cash, and you could face a penalty if you're unable to pay your bill in full. And the more time you give yourself to tackle that return, the less stressed you'll be about getting it done.

Why Are Fewer Americans Filing Taxes This Year? @themotleyfool #stocks Next Article
Current