It's natural to look forward to retirement and its numerous perks, but a frightening number of seniors opt to take the plunge despite not having nearly enough savings to show for it. In fact, Transamerica reports that baby boomers approaching retirement have saved a median $147,000, but that's actually not such an encouraging number. First, while it may represent the median retirement balance, it should also be noted that 30% of workers 55 and over have no retirement savings whatsoever. Furthermore, given that seniors are living longer these days, $147,000 might not go very far, especially when you spread it out over a 25-year period. 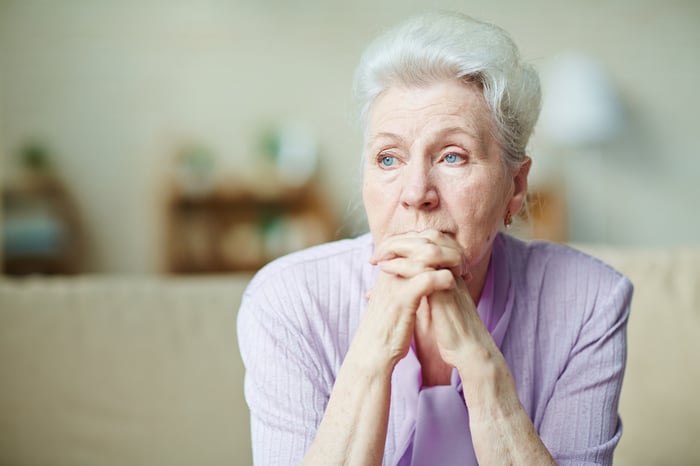 You need more savings than you think

More than 25 million Americans aged 60 or older are living at or below the federal poverty level, and much of that stems from too heavy a reliance on Social Security. An estimated 21% of married beneficiaries and 43% of single beneficiaries aged 65 and over count on Social Security to provide 90% or more of their income, when, in reality, it's designed to only replace about 40% of the average worker's pre-retirement earnings.

The problem here is that most seniors need at least 70% to 80% of their previous income to pay the bills in retirement, and some people need even more. In fact, according to the Employee Benefit Research Institute, almost half of retired households spend more money, not less, during their first two years of retirement, and for 33%, this trend continues for a solid six years. Furthermore, these spending habits were found to exist across all levels of wealth, which means retirement is also costing lower-income seniors more than expected.

When we examine the costs seniors typically face, it's not hard to see why. Though certain expenses, like commuting, will inevitably go away in retirement, other costs, like healthcare, are almost guaranteed to go up. Throw in the fact that many seniors spend just as much as they previously did on housing, food, utilities, and similar expenses, and it's no wonder such a large number run into financial trouble at some point or another in retirement. If you're looking to avoid that fate, there's really only one solution: Save enough money, even if it means postponing retirement until you're truly financially ready.

Delaying retirement has its benefits

If you've done a good job of saving money and are confident in what you've amassed, then there's no reason not to retire on schedule. But if your savings are lacking and you've been counting on Social Security to pick up the slack, you're much better off working a few extra years and socking away as much money as possible for the future.

Postponing retirement can serve two key purposes. First, it'll provide some added savings opportunities, but just as importantly, it'll help you stretch your nest egg even further. In our example above, we saw that a $147,000 savings balance delivered $490 a month in income over a 25-year retirement. Shortening your retirement by five years, however, would leave you with $612 in monthly income off the bat, without taking further savings or investment growth into account.

Currently, workers 50 and over can contribute up to $24,000 a year to a 401(k) and $6,500 a year to an IRA. Even if you can't max out these limits, saving any amount will help. As an example, if you were to sock away $500 a month for an additional five years, you'd have an extra $30,000 for retirement without taking investment growth into account.

Though you might think you're ready for retirement, consider holding off and working longer if your savings aren't where you need them to be. It's a far more responsible move than crossing your fingers, banking on Social Security, and hoping for the best.

Ready to Retire? Not Until You Read This! @themotleyfool #stocks Next Article
Current