Though the majority of tax filers end up getting a refund each year, there are those who inevitably encounter the opposite scenario of having underpaid their taxes. If you find that you owe money on your taxes this year, don't panic. Even if you can't pay your bill in full, you still have some options that will help you keep your penalties to a minimum.

Given that most Americans have less than $1,000 in the bank, paying off all of your tax debt at once may be downright impossible. The good news, though, is that much of the time, the IRS will throw you a bone -- not just because they want to make things easier on you; helping you out ensures that it gets its money. 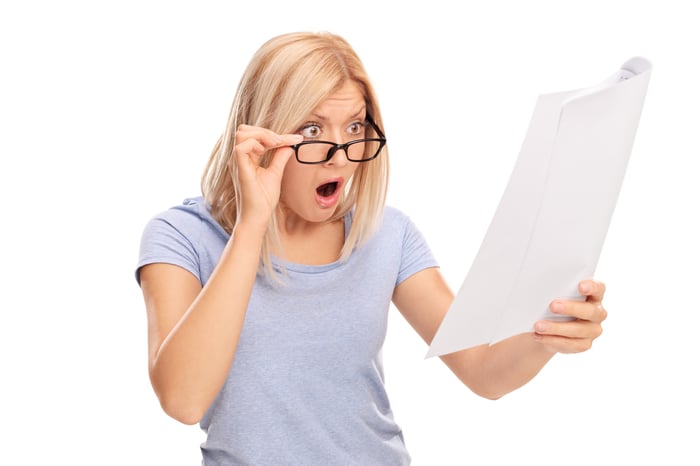 As long as you owe less than $50,000 in taxes, you can request an installment agreement that allows you to pay off your tax debt over a 72-month period. During this time, the IRS won't come after you for your missing taxes provided you keep up with the terms of your agreement.

Depending on how much you owe, you may be required to make minimum monthly payments under your installment plan, though if your unpaid balance is $10,000 or below, the IRS may not impose a minimum. Instead, you'll be given a blanket three-year period to get your balance paid off in full.

While a payment plan will make it easier for you to pay off your tax debt, you'll still face interest charges on your unpaid balance. For late tax payments, the IRS charges 0.5% of the amount you owe per month until your tax bill is paid off, up to a maximum of 25%. Those interest charges will start accruing as soon as the April 18 tax filing deadline passes, so even if you're given a full three years to knock out your balance, paying it sooner will help keep your fees to a minimum.

You should also know that there are typically costs associated with setting up a payment plan. Unless you're able to pay off your balance within 120 days, you'll be assessed a $52 fee for setting up a direct debit agreement with the IRS, or $105 for a payroll deduction agreement. Low-income taxpayers who owe money, however, can often get these fees reduced.

Here's what not to do

If you weren't expecting to owe money on your taxes, getting that bill could constitute a huge shock. But if you find yourself in that situation, here's what you shouldn't do:

Finally, try to put things in perspective. As long as you don't get hit with an underpayment penalty, owing money on your taxes isn't such a terrible position to be in. If anything, it means you got to keep more of your money during the year and, unlike your refund-collecting friends, you didn't give the IRS a tax-free loan for absolutely nothing in return.