Tax evasion is a serious crime. Don't do it. Period.

We all want to save money on taxes, but how far would you go to shave a few dollars off your final bill? While there's nothing wrong with using legal measures, such as taking deductions, to lower your taxes, engaging in outright tax evasion is a completely different story, and if you're found guilty of it, you could face a host of serious consequences.

Tax evasion is a type of tax fraud that involves willfully underpaying taxes or concealing income from the IRS. If you're found guilty of tax evasion, you could face a substantial monetary punishment, not to mention jail time, so if you're toying with the idea of bending the rules, consider this your warning to think twice. 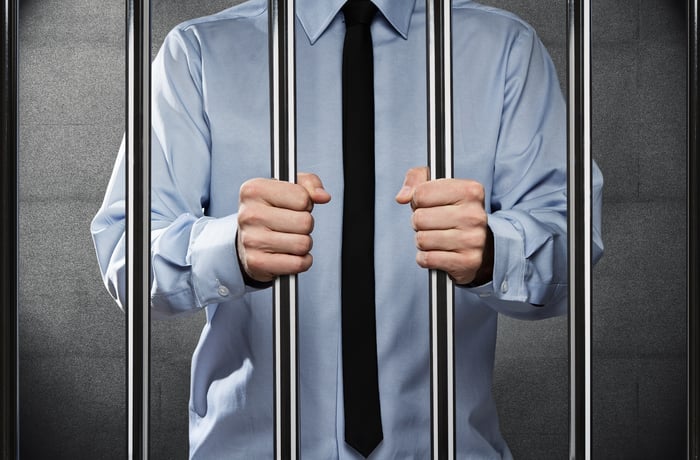 Tax avoidance is the legal act of taking steps to avoid paying taxes, and as long as you play by the rules, you shouldn't get in trouble for doing so. But when you cross the line and break the law in an effort to lower your taxes, that's when tax fraud comes into play.

Tax fraud is defined as a willful attempt to violate the tax code in one way or another, and it encompasses everything from concealing income to filing a fake tax return in an attempt to claim someone else's refund. Tax evasion, meanwhile, is a subset of tax fraud, and it involves any illegal measure taken to avoid paying taxes. Some common examples of tax evasion include hiding income from the IRS, overstating business expenses, and falsifying records to claim larger deductions.

Basically, if you deliberately lie on your tax return and end up paying less tax as a result, there's a good chance the IRS will come after you. And if it does, the consequences can be huge.

When we think about tax evasion, we tend to picture uber-wealthy celebrities or businessmen who get caught concealing millions. But hiding even a few thousand dollars of income is a crime, too.

If you're found guilty of tax evasion, you could face up to five years in prison and up to $250,000 in fines. And it's not necessarily an either/or situation -- you might get nailed with both, plus the cost of prosecuting your case. Even if you're not convicted at the criminal level, you might be found guilty of tax evasion at the civil level, at which point you'll face a penalty of up to 75% of the taxes you underpaid, plus the original taxes you owed in the first place.

Will I get in trouble for making a mistake?

Honest people sometimes wind up evading taxes accidentally. Say you received $500 in freelance income and forgot to report it. Or maybe you took a deduction you weren't actually entitled to claim. Will the IRS come after you for tax evasion?

Chances are, it probably won't. The IRS knows that the tax code is complex, and that sometimes people just plain make mistakes. To be charged with tax evasion, you'll need to have willfully attempted to defraud the IRS. Hiding $40,000 of income will probably open the door to criminal charges, but messing up a deduction or failing to report a small payment isn't going to land you in the slammer. That said, the IRS is going to want its money, so if your mistake results in an underpayment, you'll need to make good on those taxes, and you might face a small penalty as well. But as long as you didn't deliberately attempt to evade taxes, you should come away relatively unscathed.

Tax evasion is a serious crime, and one that just plain isn't worth the consequences. Given that there are plenty of ways to legally lower your taxes, you're far better off strategizing than taking chances with the law.