Please ensure Javascript is enabled for purposes of website accessibility
Log In Help Join The Motley Fool
Free Article Join Over 1 Million Premium Members And Get More In-Depth Stock Guidance and Research
By Maurie Backman – Apr 24, 2017 at 6:18AM

Getting a refund this year? Don’t blow it at once.

Though it's too early to say what the typical refund will look like for the 2016 tax year, the average American last year received $2,860 back from the IRS. Getting a refund is actually a negative thing, as it means having lost out on more of your money up front. But if you are expecting an influx of cash, here's how you can put it to good use.

According to GoBankingRates, 69% of Americans have less than $1,000 in the bank, while 34% have no savings whatsoever. No matter your income, you should always have an emergency fund loaded with enough cash to cover three to six months of living expenses. If you're among the majority of Americans who aren't even close, you can use that refund to play catch-up. 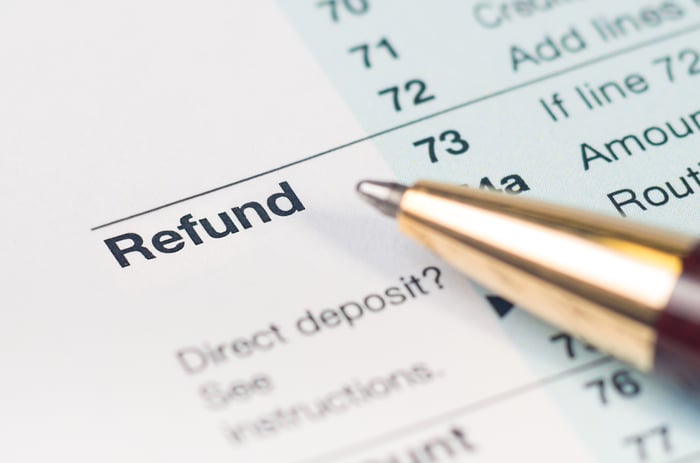 2. Contribute to an IRA

If you like the idea of getting a tax refund, you might enjoy this: Funding a retirement account will help ensure that you have enough cash in the future while simultaneously increasing your likelihood of getting a refund come this time next year. The reason? Contributions made to traditional IRAs are tax-deductible, which means you'll lower your tax bill by the percentage of your contribution that equals your effective tax rate.

Here's an example. Say you're looking at a $2,000 refund and your effective tax rate is 25%. If you use that money to fund your IRA this year, you'll automatically shave $500 off your 2017 tax bill, thereby upping your chances of getting a refund once again.

While mortgage debt is widely regarded as the good kind to have, nothing screams "bad debt" like an outstanding credit card balance. If you're saddled with credit card debt, using your refund to eliminate it is one of the most prudent moves you could make. And the sooner you knock out that debt, the more money you stand to save.

Imagine you're looking at a $2,800 balance and magically get a refund for that very same amount. Getting rid of that debt in one fell swoop will save you close to $300 in unnecessary charges if your only other option is to pay it off over the course of a year at 18% interest.

A sizable refund can help you make the down payment for the home you've been saving for, and that's something to celebrate for a number of reasons. For one thing, there's something to be said about having a place to call your own, but more so than that, homeownership can be quite beneficial from a tax savings perspective. First, there's the mortgage interest deduction, which, during the early years of your loan, can really work wonders for your tax bill. Homeowners are also eligible to deduct expenses like property taxes, mortgage points, and in some cases, private mortgage insurance (PMI).

Most people have a solid four decades to save for retirement, but unless you start putting money aside for college before your first child is born, your initial savings window is, at best, 18 years long. If there's a tax refund coming your way, funding a 529 plan is a good way to get closer to your college savings goal. Though 529 plans offer a number of benefits, the most notable is the opportunity to capitalize on tax-deferred investment growth. And the sooner you start funding that 529, the more you stand to accumulate.

Say you have 17 years to save for college and contribute a $2,800 tax refund each year. Assuming your investments grow at an average rate of 6% per year, you'll be sitting on close to $80,000 by the time those acceptance letters start rolling in.

Use that money responsibly

No matter what you plan to do with your tax refund this year, the key is to put some thought into it and resist the urge to blow it on something frivolous. Though most Americans are still making the mistake of getting a substantial tax refund, as opposed to getting their hands on more money up front, a recent GoBankingRates survey found that many workers will, at the very least, use that money sensibly. Over 40% claim they'll be using their refunds to build their savings, while only 16% say they'll be putting their newfound cash toward a vacation or splurge.

As you contemplate your options for spending your refund, try to remind yourself that you're not actually looking at free money but, rather, your money that you simply failed to collect over the course of the year. Once you change your mentality about what a tax refund actually means, you'll be in a better position to use that money wisely.