Please ensure Javascript is enabled for purposes of website accessibility
Log In Help Join The Motley Fool
Free Article
Join Nearly 1 Million Premium Members And Get More In-Depth Stock Guidance and Research
By Maurie Backman – May 30, 2017 at 8:41AM

A growing number of Americans claim they're dissatisfied with their jobs. But if you give in to that misery and retire prematurely, you could wind up in a desperate financial situation down the line.

While working is pretty much a given part of being an adult, some of us are apparently less fond of our jobs than others. In fact, it may surprise you to learn that, as per a report by the Conference Board, a New York-based nonprofit research group, more than half of Americans are actively unhappy at work.

This wasn't always the case, though. Back in 1987, more than 60% of workers said they liked their jobs. But that number has dropped considerably since then, and it reached an all-time low back in 2010, shortly after the Great Recession, when only about 42% of adults felt satisfied at work. Though that percentage has climbed over the past several years, the end result is that there are more people out there who are unhappy at work than the opposite. 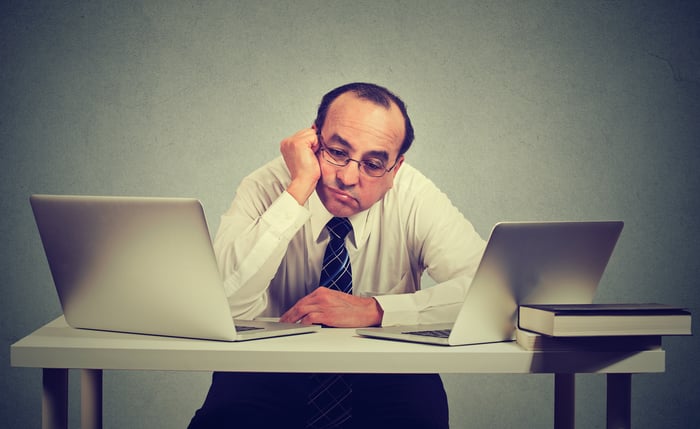 Here's the problem, though. While younger workers who don't like their jobs will typically stick them out to, well, ensure that they have this little thing called money coming in, older workers may be less motivated to keep plugging away. A study published in the Journal of Occupational and Environmental Medicine found that, while poor health is the primary factor driving older workers to retire early, job dissatisfaction is a moderate second.

This wouldn't be quite so terrible if today's near-retirees were better equipped to end their careers prematurely. But the majority of older Americans just aren't prepared financially for retirement. In fact, the median savings amount among baby boomers aged 56 to 61 is just $17,000, and an estimated 41% of boomers have no retirement savings whatsoever. Given that the typical older adult can't afford to leave the workforce early, the fact that so many are teetering on the edge just exacerbates our existing retirement crisis.

Early retirement has it consequences

Let's be clear about one thing: If you've saved well throughout your career and find yourself unhappy on the job toward the end of it, then there's really no reason to prolong your misery. But if you're among the majority of Americans who are ill-prepared for retirement, halting your career ahead of schedule could compromise your long-term financial security.

For a large number of workers, retiring early means claiming Social Security as soon as they're able. And though you can get at those benefits as early as age 62, filing for Social Security before reaching full retirement age -- which, for today's older workers, is 66, 67, or somewhere in between -- will result in a permanent reduction in payments.

The average Social Security recipient currently gets roughly $1,360 a month in income. If you're eligible for that amount at full retirement age, but claim benefits four years earlier because you hate your job and can't stand to do it another day, you'll cut your monthly payments down to $1,020 a month -- for life.

Now, if you have a healthy amount of savings and are using Social Security as a mere supplement, then slashing those benefits may not seem so bad. But seeing as how 65% of today's seniors rely on Social Security to provide the bulk of their retirement income, leaving your job sooner than planned and subsequently claiming benefits early could be one of the worst moves you'll ever make.

Another problem with succumbing to job dissatisfaction is losing out on some key years to pad your nest egg. Currently, workers 50 and over can contribute up to $6,500 a year to an IRA and $24,000 a year to a 401(k). Let's be optimistic and assume you're able to max out the latter option at your current salary. If your plan is to do so for an additional four years, only you end up retiring early because you just can't stand your job any longer, you'll wind up with almost $100,000 less in your nest egg right off the bat. And that's probably not a sum you can afford to lose.

Staying at a job that makes you miserable is tough enough when you're younger, but sticking things out when you're older -- and conceivably, far less patient -- is another story. But before you hand in your resignation, consider some alternatives to that extreme.

You might, for example, talk to your manager about why you're dissatisfied and see if anything can be done to address your concerns. If the issue is that you have too much pressure, or too much on your plate, your manager may be willing to run interference and redistribute some of your workload. Similarly, if you're bored senseless on the job and haven't felt stimulated in months, you might ask to move over to another team, or be put on a project you'll find more fulfilling.

If your job situation truly isn't salvageable, but you're not ready financially to call it quits, then it pays to explore alternate arrangements that let you stay in the workforce longer. This could mean getting a new job, switching to part-time status, or starting your own business. Leaving your job earlier than planned could render you seriously cash-strapped down the line, so think long and hard about the repercussions before jumping the gun.