For years, Social Security has served as a key source of income for millions of retired Americans. In fact, these days, an estimated 61% of retirees rely on their benefits to provide at least half of their income. The problem, however, is that Social Security was never designed to cover seniors' living costs in their entirety. So when we ask whether the average American can live off Social Security alone, the answer is an emphatic "no."

Though Social Security is instrumental in helping countless retirees stay afloat financially, it was never meant to function as a sole source of income for seniors. The Social Security Administration itself says that those benefits will, at best, replace roughly 40% of the typical worker's pre-retirement income, but as we'll see in a minute, that won't allow the average retiree to fully pay his or her bills. 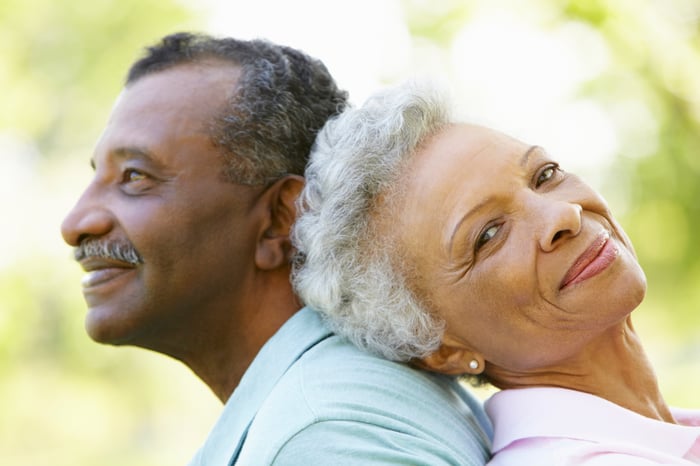 Furthermore, Social Security is currently facing a significant shortfall. Come 2034, the program's trust funds will likely be emptied, and once that happens, Social Security is only expected to collect enough in taxes to pay about 79% of scheduled benefits. And while there's a chance Congress will step in between now and then with a fix, it's not something present and future retirees can bank on. What this means is that there may very well come a point when Social Security can't even replace 40% of recipients' pre-retirement income income.

While the amount of money you'll need in retirement will depend heavily on your lifestyle and goals, most seniors will require around 80% of their former income to cover the basics. In other words, forget about month-long cruises and country club memberships -- there's a good chance you'll need double the replacement income Social Security can provide just to pay for things like housing, food, transportation, and healthcare.

But don't just take my word for it. Rather, let's look at some numbers. The average Social Security recipient currently receives around $1,360 a month, or $16,320 a year, in benefits. A dual-income household, therefore, might collect $32,640, on average.

Now let's see how that figure stacks up against the costs retirees inevitably face, like the following:

So let's add up these bare-bones expenses. When we factor in healthcare, housing, transportation, food, and clothing based on what the average American household currently spends, we arrive at a total of $48,155 a year. Even if we shave off a bit on the food category to account for fewer restaurant meals, we're still looking at a minimum of $46,787 just to get by. And that figure includes zero leisure spending, nor does it include expenses like cable and cellphone service. Since we just learned that the typical dual-income household can expect $32,640 from Social Security in a best-case scenario, it makes a pretty clear case that the average American cannot live off those benefits alone. Period.

The Economic Policy Institute reports that 41% of baby boomers aged 55 to 64 have no retirement savings at all. If you're part of that statistic, then you'll need to start taking steps to ramp up your retirement plan contributions while you can.

Case in point: Contributing $300 a month to a retirement plan over a 30-year period will give you a rather impressive $340,000 nest egg, assuming your investments generate an average annual return of 7% during that time. Increase that monthly contribution to $400, and you'll be sitting on $453,000 in time for retirement.

No matter how much money you're able to save on your own, don't make the obvious mistake of saving nothing. Social Security will not cover your bills as a senior, and the sooner you accept that reality, the more opportunity you'll have to compensate.

Can the Average American Live Off Social Security? @themotleyfool #stocks Next Article
Current