Thankfully, there are new protections in place to safeguard investors from otherwise dishonest advisors.

Countless Americans rely on financial advisors to plan for the near term, as well as the future -- and rightfully so. After all, you'd visit a dentist to deal with a nagging toothache, and you'd call your mechanic to fix an engine problem, so it only makes sense that if you don't know a ton about investing, it's wise to seek outside help.

Yet, a surprising number of Americans who have financial advisors don't actually trust them to act in their best interests. In a 2016 poll by the American Association of Individual Investors (AAII), 65% of respondents said they mistrust the financial services industry to some degree. In fact, only 2% of respondents claim to trust financial professionals "a lot," while 15% say they trust them "a little." 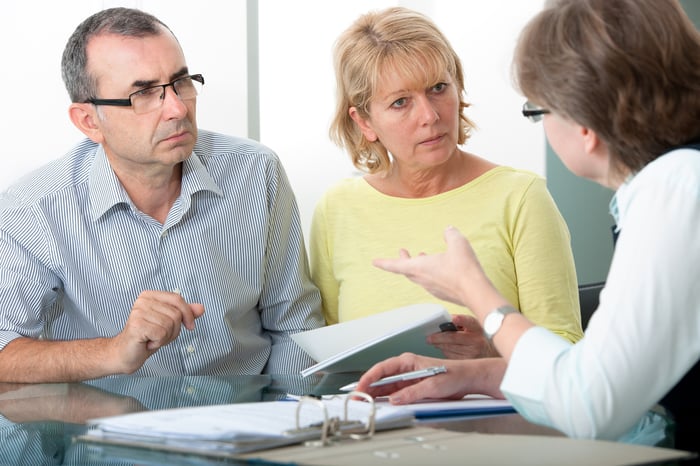 Of course, given the number of unscrupulous advisors out there, this news isn't particularly shocking. In fact, my colleague Selena Maranjian reported last year that between 2005 and 2015, an estimated 87,000 financial advisors were found guilty of some form of misconduct. These transgressions ranged from unsuitable advice, to unauthorized activity, and to outright fraud.

On the other hand, the aforementioned 87,000 advisors represent just 7% of the total sample set studied, which means most financial professionals didn't engage in misconduct. Furthermore, with the new fiduciary rule recently put into place, savers can rest easy knowing that a larger number of professionals will be held to a stricter set of standards going forward. And there's at least a degree of comfort in that.

Most of us could use some guidance

The public's general mistrust of financial advisors opens the door to a potentially dangerous trend: foregoing the help of those dishonest professionals, and making money-related decisions on our own. Of course, it always pays to get educated about investing, but rather than read up on long-term strategies, a large number of savers will most likely just wing it, and that's where they might run into trouble.

Furthermore, most working Americans actually want help with financial matters. In a 2016 Wells Fargo study, 58% of savers with 401(k) plans said they'd like more help choosing investments. That same report found that most U.S. adults are investing too conservatively for retirement, and could be losing out on thousands of dollars in potential gains over the life of their accounts as a result.

That's why it's critical for more folks to be able to trust the financial professionals they work with. The right advice could spell the difference between a sizable retirement nest egg and one that barely covers the basics. We just need to know what to believe.

The new fiduciary rule will help

It may be that Americans overwhelmingly don't trust their advisors, but as of June 2017, they have a whole lot more protection in place. Thanks to the implementation of what's known as the fiduciary rule, going forward, financial advisors who work with retirement accounts will be required to adhere to the fiduciary standard, which states that they must act in their clients' best interests at all times.

Things didn't always work this way. Before the rule was put into place, it used to be that financial professionals could get away with recommending investments that were merely suitable for their clients, even if those investments weren't necessarily in their clients' best interests. For example, an advisor could, in theory, recommend one fund over another to score a higher commission as long as that fund matched his or her client's investment plan and appetite for risk. Under the new rule, that sort of behavior just won't fly, and so those who use financial professionals can rest assured that they won't be needlessly overcharged.

If you've been thinking of using a financial advisor but aren't sure who to trust, one of the best things you can do is get a recommendation from a long-term, satisfied client. You should also feel free to ask your advisor how he or she makes money, so that you get a full understanding of the various fees you might face.

Finally, you can take a reasonable degree of comfort in the fiduciary rule and the various protections it offers, at least with regard to retirement accounts (traditional accounts, unfortunately, are a different story, at least for now). In an ideal world, we'd all have a little more faith in the people who call themselves advisors, but in the absence of actual trust, a healthy dose of legal reassurance is certainly the next best thing.